Selfish, Starving Hummingbirds
Relax. Give way. Someone’s watching out for you.
By Ryan Malone • Feb. 9, 2021 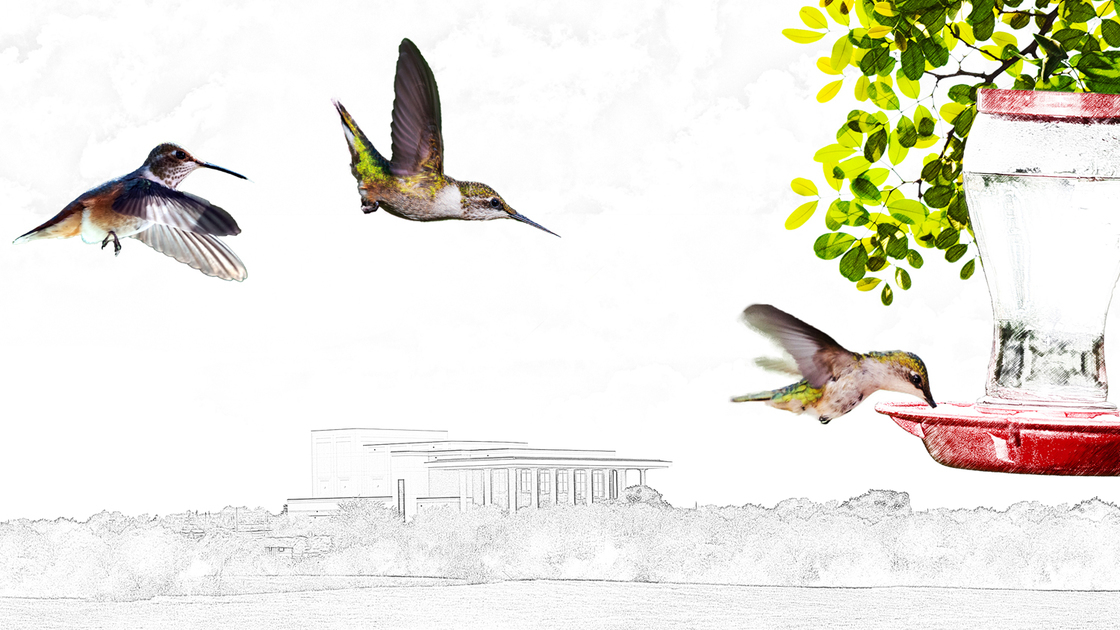 I had never seen a hummingbird sit still.

When I thought of these little wonders of flight, the iconic image that came to mind was the blur created by their wings as they hovered over a flower or a feeder. But last summer, we bought a special kind of feeder for our front porch. It was colorful, shaped like a large vase, and it had four tiny perches surrounding the base.

Our family would sit on the front porch and watch as one after another came just a few feet from our faces and felt safe enough to stop their flight, rest their overworked wings, and take rapid guzzles of nectar from the feeder we kept constantly filled.

My wife was careful to change the nectar frequently—as she had read that this was key to keeping these birds coming back regularly. We had read that these birds have a strong memory of where they have been fed, even buzzing around the heads of owners when it’s time to refill the feeders.

It appeared that these birds grew familiar with us and the gourmet dining we were offering them. This is when our evening pastime became far more interesting.

We started seeing a lot more hummingbirds at the same time. This is the first time I’d heard what their chirping sounded like (and as time went on, I would often hear the birds before I saw them whizz by). The dances they did in the air rivaled any fighter-jet air show. We were simply enamored by this flock (and learned a “flock” of hummingbirds is technically called a “charm”) until we realized something troubling. They weren’t dancing, playing or mating. They were fighting.

Upon further observation and study, it became clear what was happening. These hummingbirds, particularly the males, become protective and territorial when they find a great source of nectar. We would watch one bird come in for a drink, and then—incoming!—an aggressive counterpart would dive bomb the little thing and chase it off. We would follow the aggressor with our eyes and see him perching in a nearby tree (camouflaged by leaves and nearly impossible to spot unless you followed the bird to the tree with your eyes). It was from that tree that he would keep watch over his gourmet food source, and then attack whenever another bird got too close.

I don’t think the little tyrant wanted other birds even coming close to the humans. I had one hummingbird come just outside of arm’s length from my face and chirp at me, until this other more aggressive creature knocked him away.

What I noticed about this was that the “protective” hummingbird was spending far more time keeping others from eating than he himself was eating! It’s all based on an instinct for survival, but a little reasoning would tell him that he would be a lot more likely to survive if he would just eat.

Because we felt bad for all the other birds who couldn’t enjoy the sugary libation we had prepared, my wife started studying how to help the others. The research was clear: Put up more food sources, spread them out, and keep them as much out of view from the other feeders as possible. The alpha-male will not be able to protect all of them, and other birds will have a chance to eat.

So we bought some smaller feeders and put them all around the house (two others near the front porch, but near bushes or angled in such a way that they couldn’t be seen from the “watchtower” that our hummingbird had created in that one tree). As the summer passed and the birds began to tank up for whatever migration lay ahead, the “charm” grew. Soon, our summer evenings were spent watching two or three birds—at each feeder—jockey for who would get a nip. We had definitely made it harder on the original hummingbird boss to protect all the feeders, but we had also seen other of these fowl lay claim to their new one. And that original boss looked exhausted from doing everything he could to keep others from feeding on his turf.

A life lesson emerged. We talk about the “give way” and the “get way,” and how we actually have more if we live the “give way.” Here was a prime example. Our alpha-male bird was spending the majority of his time watching and chasing—and very little time actually eating what he was protecting!

I expressed this thought to my wife one evening. As the one doing most of the refilling of the feeders, she replied: “And if he only knew that I will always make sure there’s enough nectar in these feeders.”

These two life lessons are profound. We can often spend an exhausting amount of energy and effort in “survival” mode—that is, in pure selfishness—when we’d be far more satisfied just partaking of what is there. Meanwhile, we can easily forget that someone is there who wants to make sure that we always have enough—that there is basically an infinite supply beyond what we can see!

This profound concept is covered in Matthew 10:29, where Jesus Christ told His disciples that our heavenly Father knows when even a sparrow (the most common and therefore least valuable of birds) falls to the ground. The lesson from that statement Christ gives in verse 31: “Fear ye not therefore, ye are of more value than many sparrows.”

Our needs and our concerns are far more taken care of than those hummingbirds that my family fed this summer. We can fret and stew over whether or not this or that will be taken care of—or how we are the only ones watching out for whether or not we will survive. We can think that all that is available is what we can see right before our eyes. And yet, we have a loving and all-powerful Creator and Caretaker who wants to ensure we always have enough.

Not long after witnessing all this fowl play, my wife was getting concerned about something happening in her life. After praying about it more, however, she soon calmed down and said to me: “God is trying to tell me that He’s making sure all the feeders are filled!” She wasn’t talking about our hummingbird feeders, but how God—in spite of our worries—is taking care of our all our needs.

We don’t need to buzz busily from one feeder to the next, making sure no one is taking from us, in order to survive. Our all-knowing, all-loving Creator will never run out of means with which to keep us nourished and even thriving. That’s the beauty of trusting in God and living the give way.