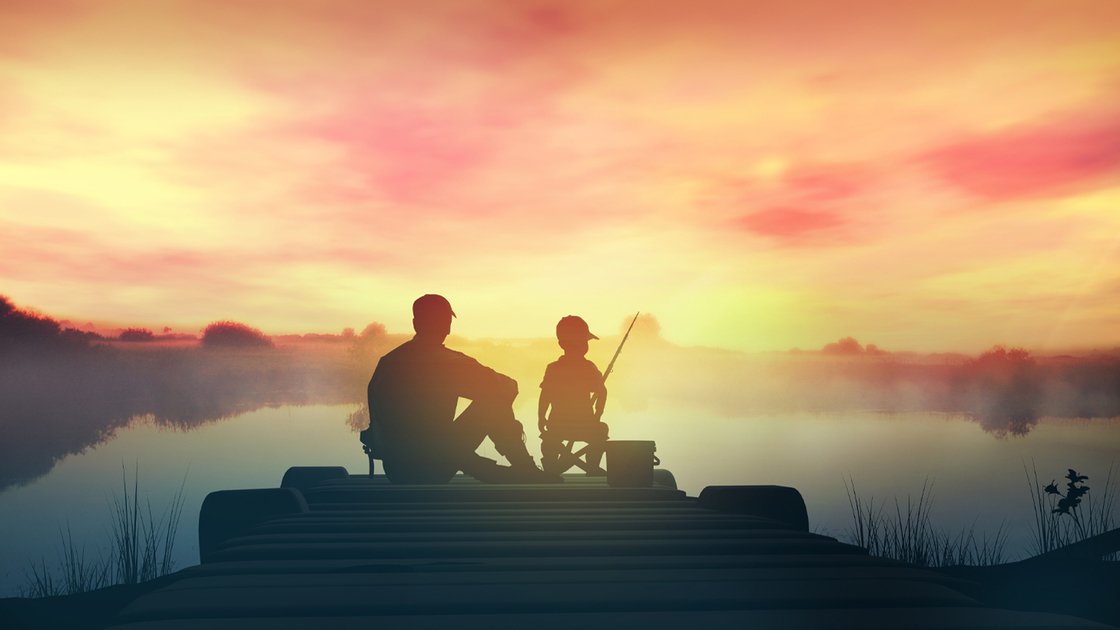 The theory of evolution and the feminist movement’s power over the thinking of women and men have contributed significantly to the catastrophic demise of the father’s role in a child’s development to successful adulthood. These two flawed modes of thinking have elevated the mother’s role to a lofty and supreme height and reduced the father’s role to that of biological sperm donor. In the 1970s, feminism encouraged single women to reject “flawed paternity” and track down the best genetics for a child at a sperm bank. A father’s role in a child’s life was deemed irrelevant by family counselors and psychologists. Time has proved this thinking tragically wrong. This year’s city-destroying protests and riots in Western nations are one consequence of raising children without fathers.

“We hear a great deal about conspiracies today. Our people almost seem conspiracy-obsessed. But the greatest and most damaging conspiracy is the one against fatherhood today. And very few people understand it or what deadly consequences it will have in our society,” Royal Vision editor in chief Gerald Flurry writes in his 1999 booklet Conspiracy Against Fatherhood.

The late Herbert W. Armstrong, pastor general of the Worldwide Church of God, warned Church members continually that there is a cause for every effect. There is a cause for the youth-led violence erupting worldwide. The problem of absentee fathers is pervasive in today’s world. It is the leading cause of youth-led violence and crime. As a people, we must face the cause and work hard to rectify it!

Mr. Flurry quotes Kathleen Parker from the Sunday Oklahoman, of July 25, 1999: “Now is the time for all good fathers to come to the aid of the family. Hurry; your days are numbered. If you happen to be a heterosexual male (further doomed by Caucasian pigmentation), your days are already over, according to a cover article in the June issue of American Psychologist, published by the American Psychological Association (apa).

The article, Parker says, challenges the foundational institution of fatherhood. “More or less, fathers, as we’ve known and loved them, are obsolete” (emphasis added).

Concerned with the same warped view of fatherhood, in 2015 science journalist Paul Raeburn authored a book titled Do Fathers Matter?: What Science Is Telling Us About the Parent We’ve Overlooked. Raeburn was appalled by what science believed about a father’s role in child rearing.“Keeping children fed, housed and out of poverty was significant. But was that it? What else could fathers claim to contribute to their children?” he writes. “As recently as a generation ago, in the 1970s, most psychologists and other ‘experts’ had an easy answer to that question: not much. With regard to infants, especially, fathers were thought to have little or no role to play.”

While researching for his book, Raeburn discovered a few dissident voices on the matter. He writes: “In 1976, Michael E. Lamb, a developmental psychologist and pioneer in research on fathers, wrote that the emphasis on mothers in infants’ development was so one-sided that it seemed as if ‘the father is an almost irrelevant entity in the infant’s social world.’ For decades, psychologists had ‘assumed that the mother-infant relationship is unique and vastly more important than any contemporaneous, or indeed any subsequent, relationships.’ The attachment to this nurturing and protective adult was supposed to give the infant an evolutionary advantage—even Darwin had endorsed this exclusive focus on the mother, the experts claimed, and who was going to argue with Darwin?” Raeburn shows why it is necessary to argue with Darwin. Science in the ’70s and subsequent decades got it wrong about fathers. “The record shows that fathers were—and are—widely overlooked in scientific studies,” confirms Raeburn.

“The irrelevancy of fathers had become an article of faith among researchers, and why would any of them question something they knew to be true?” writes Raeburn. Then he praises Lamb for being among the first to start challenging the unproved assumptions of the ’70s. Slowly, studies began to appear that suggested that the bond between mothers and infants wasn’t nearly as strong as others had assumed. Fathers mattered too. Yet many family studies today still put a primary focus on mothers and push fathers aside. However, studies on the importance of fathers are growing.

New family studies show “that kids who grow up with a present, engaged dad are less likely to drop out of school or wind up in jail, compared to children with absent fathers and no other male caretakers or role models,” wrote Joshua A. Krisch for fatherly.com. The title of his article is “The Science of Dad and the ‘Father Effect.’”

The fact that there now exists a “science of dad” is exciting for many. It is unfortunate, however, that science is only now catching up with what God has worked to teach humanity for ages. Paternity—the role of a husband in a marriage and the role of a father in a family—is a creation of the great God for a lofty purpose: the expansion of the God Family.

While some experts have long believed that a father’s role becomes important around toddler age, new research shows that fathers have positive impact on the development of newborns and infants. So now there is emerging consensus that the role of the father should be studied at all stages of a child’s development. A 1991 study “found that infants attained higher cognitive scores at age 1 if their fathers were involved in their lives when they were one month old,” wrote Krisch. “Preterm infants similarly score higher at 36 months … and a separate study found that infants who played with their dad at nine months enjoyed similar benefits.” No father should doubt that his role in a child’s life begins at conception and must continue from birth even into adulthood. Yet because of our society’s flawed philosophy and education, few fathers know how to father.

Father is a Verb

Here is a case in point. Charles Krauthammer, one of the most educated and well-respected essayists of our time, wrote in an essay titled “Reveries of a Newborn Father”: “Three weeks ago Daniel Pierre Krauthammer, our first, entered the world. … What do I do? It seems my job is to father, a verb which must count as one of the age’s more inventive creations. How exactly to father? I don’t really know” (Washington Post, June 1985). If you take the time to study this short essay (you can find it online), you will discover that it reflects the thinking that Paul Raeburn warns fathers against.

To truly help the children a man has fathered, he must become fully educated on the vital role he plays in his child’s life. A well-educated father is a man of action in the life of his sons and daughters. “And, ye fathers, provoke not your children to wrath; but bring them up in the nurture and admonition of the Lord,” wrote the Apostle Paul (Ephesians 6:4). This is a must-study scripture for all fathers and even grandfathers. Unlike today’s society, it exalts the need for paternity in child rearing. There is much to unpack from this verse.

Paul states first that a father must not provoke his children to wrath. Certainly, this means that all fathers should be warm and loving to their children. Being critical, dismissive and negative with children will provoke them to be angry and distant from a father. However, being absent from your child’s life will also provoke that child to wrath and eventually create a rebellious and violent nature. Such wrath was clearly evident in the crowds of young people rioting, looting and burning down cities this past summer. We can only imagine the tragic family life of the youths we saw destroying property on our nightly news.

Obviously, loving fathers are gainfully employed to provide life’s necessities for their families. Unless self-employed and working from home, many fathers are gone a considerable time during the day. Many men today have been conditioned to believe all that is truly required of them is to provide a paycheck. That thinking does not cut it with God.

Paul wrote that a father must “bring them [children] up in the nurture and admonition of the Lord.” The word nurture means more than just to care for. It means to encourage growth and development. A nurturing father is on duty after work hours—until bedtime—and on weekends. If a father is truly warm and loving, he desires to spend quality time with his children. He is willing to sacrifice some of his own downtime to ensure his children are growing strong and healthy physically, emotionally stable, and mentally alert and bright. Most importantly, a nurturing father ensures his children receive a Bible-based, God-fearing, religious education.

The new “science of dad” is proving that there is great benefit to a paternal presence in a child’s life. This benefit is known as the “father effect.” It should not only motivate men living with wives and children, but also encourage single moms because of death, divorce, neglect or a husband’s incarceration. A grandfather, a step-dad, an uncle, or a concerned male friend can have a similar, positive effect on a child.

The father effect begins with quality time—not necessarily a quantity of time. For example, watching television for an evening with a child would not be considered quality time. The father effect blossoms when the paternal figure is involved. It might be as simple as helping with homework, playing an educational board game, or playing outside. Fathers who must travel away from home for work can take time to call a son or daughter. The father effect takes hold when a dad, or another paternal figure, attends a sporting event a child is engaged in. Current studies show that even infants respond favorably when a dad holds them and interacts with them. In fact, growing infants love to play more with their dad than their mothers. Young children somehow sense that their mom is overprotective, but dads encourage them to challenge themselves. The point is that being around a child is not enough—it is all about being engaged. Even fathers living away from children due to divorce can find ways to be engaged with their children.

“Most studies suggest that, until children hit puberty, the father effect is roughly equal for boys and girls. Both boys and girls who are fortunate enough to have dads in their lives excel and, in many cases, outperform their peers. But when hormones kick in, studies demonstrate that dads suddenly become the arbiters of sexual behavior too,” wrote Kirsch. Teens with engaged fathers avoid drugs and risky sexual behaviors. There is great positive power when the father effect is in full operation.

Being an effective father can seem overwhelming, yet you can become well educated and effective in this all-important role. It won’t happen overnight, but with dedication and consistent effort it can be done.

The Philadelphia Church of God’s book Child Rearing With Vision is filled with the education you need to become the father God intended you to be. It will be sent to you free upon request. It is also important to read Conspiracy Against Fatherhood, by Gerald Flurry. This booklet will inspire you to embrace your God-given role as a father.