PCG members: In addition to PCG Signposts, sign-up for the members-only Friday Philadelphian weekly email newsletter! Click here or email news@pcog.org ✖
A Poke Through Jello
A man with the right stuff who jumped over aviation’s biggest hurdle
By Erica Anderson • Dec. 17, 2020 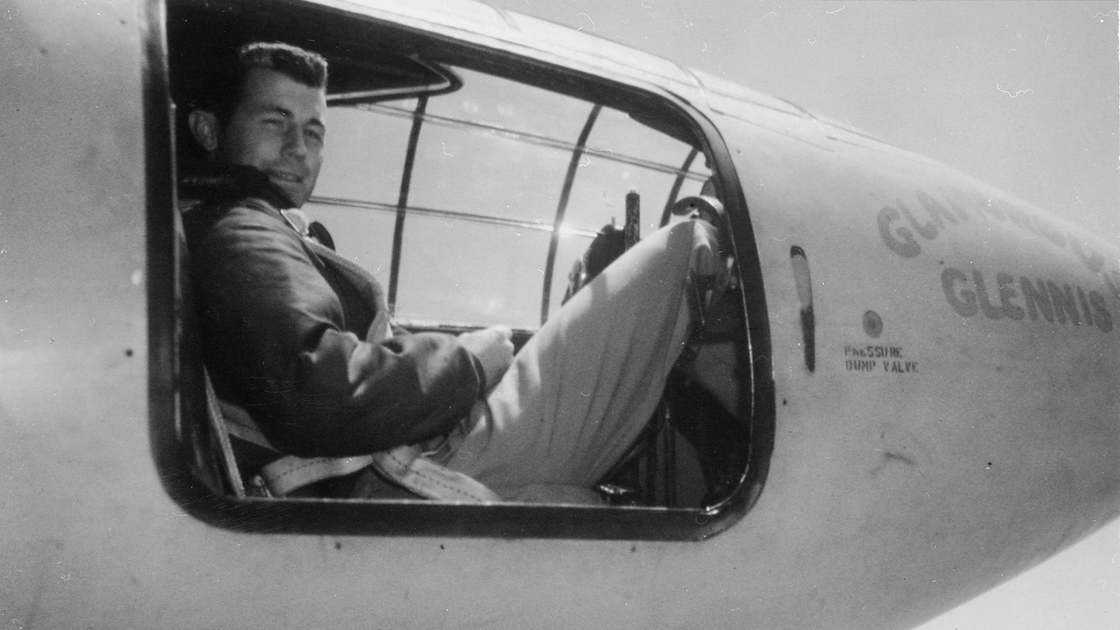 It would be like hitting an invisible brick wall in the Earth’s atmosphere—man and machine would instantly disintegrate, they predicted. Aviators believed it was impossible for man to travel faster than the speed of sound. Critics said it would “punch a hole in the sky.” Doubters thought supersonic flight would break apart aircraft.

But then a daring pilot, crammed into a crowded cockpit surrounded by knobs, gauges, switches, and the roar of a six-thousand-pound-thrust rocket engine, broke through the sound barrier at a velocity of 700 miles per hour and lived to tell about it.

Twenty-four-year-old pilot, Charles “Chuck” Yeager, made aviation history on October 14, 1947, in a unique airplane he dubbed the “Glamorous Glennis,” after his wife. By breaking the sound barrier, he taught mankind an important lesson about achieving the seemingly impossible.

Following the war, Yeager returned to the United States and helped train new Air Corps cadets in Texas. He also participated in air shows, service trials, and various test flights. Eventually, because of his skills, war experience and extensive knowledge of fighter aircraft design, he was selected by the U.S. Government to pilot America’s first research rocket aircraft, the Bell X-1.

In 1947, the same year the Air Corps was renamed the U.S. Air Force, he traveled to California to test the X-1. His mission was to fly faster than the speed of sound. After three months of test flights, he came close to breaking the sound barrier several times but was not able to achieve supersonic flight.

One problem was the force of gravity and compressibility, which nearly caused him to pass out when hitting speeds of 600+ mph. But he didn’t give up. Yeager kept taking test flights, determined to keep “chasing that demon,” a metaphor for the seemingly elusive hypersonic speed needed to break the sound barrier.

He came to realize that there was a control issue associated with transonic flight. “The airplane continued flying with the same attitude and in the same direction,” he later reported. The X-1’s pitch controls were ineffective because the shock waves created an aerodynamic “shadow” around the tail. Once changes were made to improve the horizontal tail controls, Yeager could control the airplane’s pitch up and down. The practice flights continued as the situation in the cockpit gradually improved.

The night before Yeager made history in the X-1, a “disagreement” while horse riding left him with two broken ribs. “I’d had a bad night’s sleep from the pain in my side, but also from the indecision about whether or not to fly the mission incapacitated. Tossing and turning, I decided to make up my mind in the air,” he said. “If I could get into the pilot’s seat, I knew I could fly.” Although he had to use part of a broomstick handle to help close the plane’s hatch, he went ahead and prepared for another test flight the next morning.

Yeager was every bit as prepared mentally as he was physically. While the X-1 was being fueled, he reflected on the previous eight test flights: “The drop itself was the next big obstacle, and like entering the bird, it’s something that I never really got used to … The X-1 would float from the B-29 and I’d get launched right up to the cockpit overhead, caressing the canopy with my helmet in the sudden swell of microgravity. My heart was in my mouth, stomach right behind it.” Yeager knew exactly what do to as he had practiced the flight several times; however, the task was still nerve-racking. He was determined to keep trying until he accomplished the mission.

A B-29 bomber carried the X-1 to an altitude of 20,000 feet over the Mojave Desert. Once the jet was launched, Yeager took control and accelerated. As before, he quickly eclipsed 600 mph, but this time he didn’t feel like he would pass out. He stayed focused, despite the extreme speed and his broken ribs. Everything worked perfectly, and at Mach 1.05 and 45,000 feet high, he made history.

At first, Yeager was not sure he had accomplished the mission because everything seemed so flawless—almost casual and routine. “There was no buffet, no jolt, no shock. Above all, no brick wall to smash into. I was alive.” After watching the needle on the dash-mounted Machmeter fluctuate in the upper .90s, then suddenly jump to 1.06, Yeager wondered if the instrument was malfunctioning. Then he realized he had actually broken the sound barrier.

Immediately, he communicated the readings to his fellow test pilot, Jack Ridley, whose task was to analyze all of the technical data generated during the flight. Jack, and everyone else on the ground, heard the first sonic boom ever created by an aircraft. It was loud and startling, like a massive thunderclap, but Yeager later recalled that breaking the sound barrier in the X-1 went very smoothly—just like “a poke through jello.”

Yeager’s accomplishment was kept top secret until the following year. Once it was revealed, he became a celebrity and was presented the Collier Trophy by President Truman. This was the greatest award in aviation since the Wright brothers’ flight in 1903. He inspired aviators everywhere, and even his critics were impressed at his remarkable feat.

He was ambitious, courageous and dedicated. He had the spirit to do what experts told him would be impossible. He was an individual thinker and willing to take a calculated risk. He was loyal to his country—a man of integrity and duty. He persevered, not giving up until he had broken through the sound barrier.

Years later, Yeager said, “It didn’t make any difference to me whether I thought the airplane would go faster than sound. I was assigned as a test pilot on it, and it was my duty to fly it.”

Every one of us face challenges in life that might not be as risky or daring as flying a rocket plane past Mach 1, but we have opportunities to build character by applying some of the same principles Yeager did. We can choose to persevere until we overcome obstacles and attain goals.

Strive each day to break through your personal barriers in life. Know that it might look hard or even impossible—but don’t give up. Strive to succeed, and chances are, you will. You might find in hindsight that it wasn’t that difficult to break through after all. It might be just like a “poke through jello.”