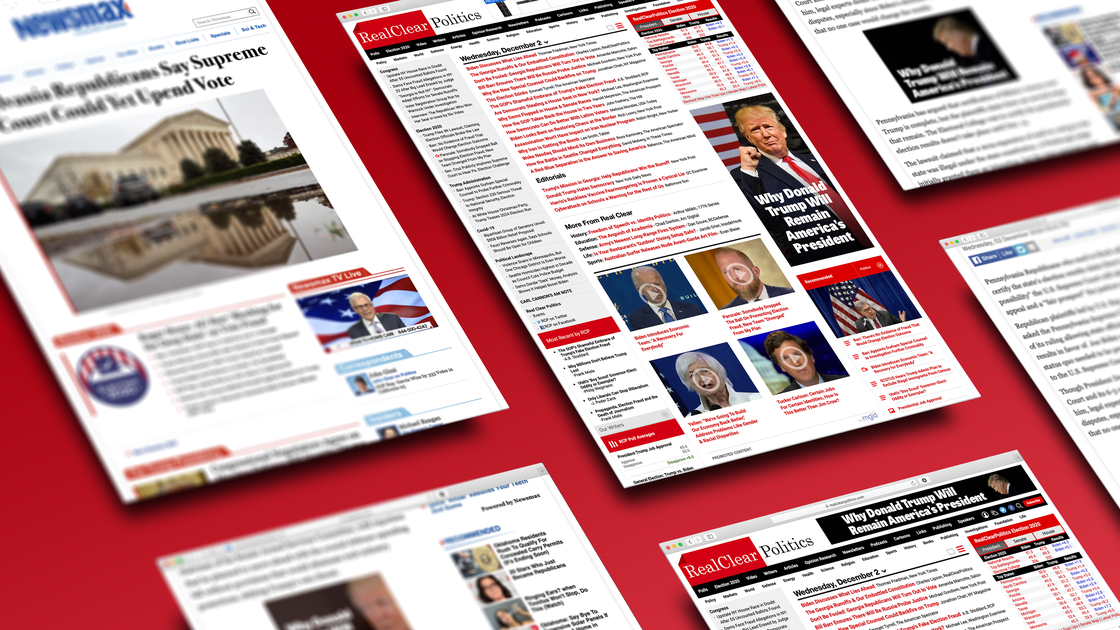 Newsmax and RealClearPolitics users who click on the ad and read the article will see some of Mr. Flurry’s boldest forecasts, beginning with:

“By most appearances, Joe Biden will be America’s next president. But I absolutely do not believe that at all. Mr. Trump will weather this storm too. Regardless of what the media says or how things look right now, I am confident Donald Trump will remain president.

“I am also certain that we are about to see some of the biggest frauds exposed perhaps ever!

“Why? Because a Biden presidency is contrary to Bible prophecy. …

“The Bible has a lot to say about Donald Trump and his presidency. The main prophecies are in the book of Kings and in Amos 7, and several other passages speak more generally about America under his leadership. God cannot lie! These end-time prophecies must be and will be fulfilled!

“The prophecy in Amos 7 is crucial to understanding the 2020 election. It is about Mr. Trump, and much of it is yet unfulfilled!

The advertisements will appear 319,000 times within the body text of articles on Newsmax and 83,000 times as a banner on Real Clear Politics.

The campaign also includes a “Sunday Main Exclusive” e-mail that Newsmax will send to its 753,000 e-mail subscribers next week. Under Newsmax’s banner and explanation that the e-mail contains sponsored content, the rest of the content will be written and designed by the Trumpet staff.

Perhaps one of the most important parts of the campaign is a sponsored link on the Newsmax homepage, separate from most of the other ads, that links directly to the article on theTrumpet.com

Online marketing staff member Edwin Trebels, who is coordinating the campaign under Evangelist Stephen Flurry and United Kingdom-Europe Regional Director Brad Macdonald, said that the Sunday e-mail and other aspects of the campaign were personally approved by the Newsmax chief executive officer, Christopher Ruddy, and noted that he is a confidant of President Donald Trump. Newsmax is a rapidly rising competitor to the largest politically conservative media company, Fox News, especially after Fox biased some of its main presidential election coverage toward Democrat candidate Joe Biden.

This advertising campaign represents one of the largest efforts by the Philadelphia Church of God’s online marketing department since it began in 2007. The current campaign’s RealClearPolitics homepage component alone reaches twice the users that theTrumpet.com homepage currently reaches. The Newsmax homepage component reaches 7.5 times the users.

Meanwhile, the department’s regular budget for Facebook ads is being devoted entirely to this same article for all of December and half of January. These ads are so far among the department’s best-performing ads on that platform. The article also caught the attention of a major United Kingdom news site, which disagreed with its conclusion, but quoted it accurately at length to an its audience, which is estimated to be in the millions.

The online marketing department is also devoting its entire monthly online advertising budget for WatchJerusalem.co.il and for the Dutch, French and German languages to promoting this same article. Already the French-language version of the article has helped cause daily page views at laTrompette.fr to almost double to 1,500 per day.

The campaign is currently scheduled to run through December 8. Trebels said he is gathering advertising information for other conservative news websites for reference in the future.