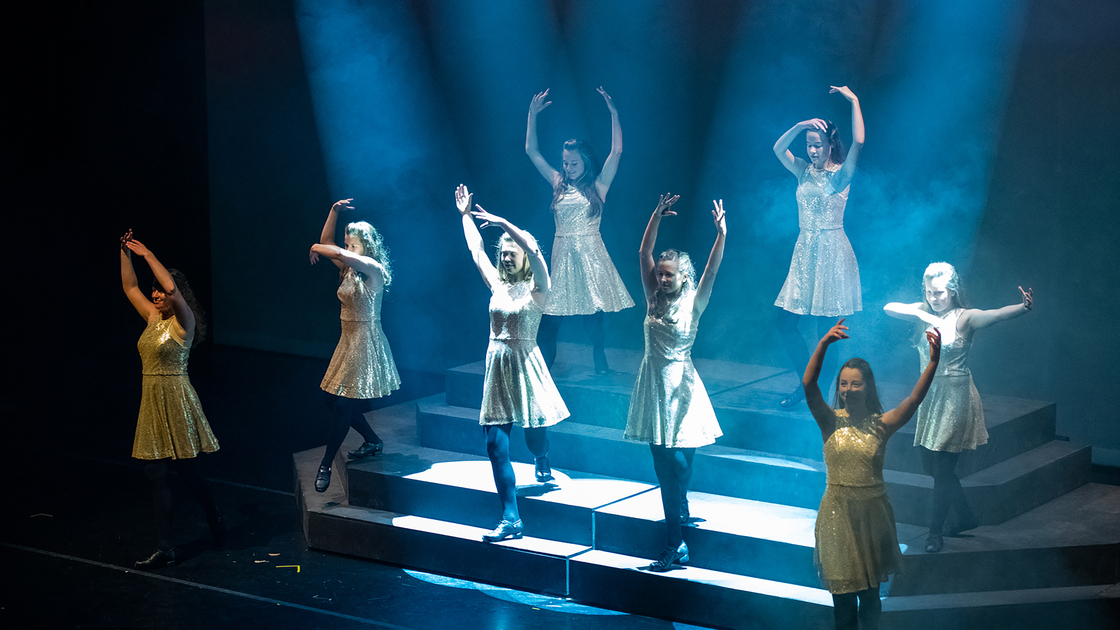 EDMOND—Hundreds of concertgoers watched the Philadelphia Church of God Irish dance production Celtic Throne during its five showings June 28 through July 7 at Armstrong Auditorium in Edmond, Oklahoma, and the Dutton Theater in Branson, Missouri. The show portrays the history of Irish dance in the nations God has used to carry out His work over the past 3,000 years, beginning in ancient Israel and continuing through Ireland, Scotland, England and America.

After watching the show, concertgoers gave their thoughts in person and online.

“Celtic Throne was fantastic! This performance was so uplifting in a very chaotic nation!

So nice to see young people work so diligently to present an event we’ll never forget.”

“Powerful and Extravagant! Blown away by the power! The performance (Celtic Throne) was spectacular (reminiscent of Riverdance on almost all levels), but the sheer power of the facility—the lights, the sound, and the atmosphere—literally cannot compare to anything else.”

“Better than expected. Great performers with lots of variety in dance, songs, ages and music. Loved the many costume changes.”

“The jewel of Edmond. Online ticket sales were simple and efficient. The entire building is elegant and beautiful, a perfect setting to increase one’s anticipation of top-notch performance. The theater seating was comfortable and spacious, the view was spectacular from our balcony seats and the acoustics are unmatched. The location was easy to find with ample parking, and the parking attendants were courteous and helpful. The entire experience was most pleasant, and I look forward to returning.”

“Very much needed! Celtic Throne was just absolutely amazing!! The performance captured your attention from its opening to its close. It was an hour and half that was full of all types of emotions; excitement, joy, laughter, sadness, patriotism. Including the audience at different times of the performance made me feel, in a very small way, a part of the show. In a world that is so uneven right now, Celtic Throne was definitely the balance that was and is needed for everyone today.”

“Awesome! I loved every minute of the show. The music was beautiful and joyful. I can’t wait to go back!”

“I can’t say enough good about this show! Congratulations to all who helped put this together, and especially to the performers who outdid themselves today! I’m really glad I decided to pre-view this today (have tickets for next Sunday—yay!). It was SO moving, stirring and excellent.”

“What did I just watch!!??? This was the most amazing production ever to come from Armstrong Auditorium. Celtic Throne is jaw-dropping!!!”

“So pleased to have Celtic Throne performing in our theater this week. They are amazing!”

“I saw the stunning debut performance yesterday. Made my Irish heart sing and swoon. … You will be wowed—guaranteed.”

“Magnificent—all of you! Great pleasure to watch and listen! Really enjoyed the trio of [Ryan Malone], Mark Jenkins and Joel Hilliker. And, of course, the ladies were spectacular!”

“Well worth the cost of the ticket. One of the best Irish dance shows I’ve ever seen! … So nice to live in a state that’s still proud to be AMERICAN.”

“BRAVO! BRAVO! BRAVO! It was truly a wonderful wonder! So much talent. Dancers, singers, musicians, music and production is a job well done!
Loved it!”

“Wow! This is seriously a professional production. Great choreography and beautiful Celtic music. Loving this!”

“I cried. I shouted. I was breathless at times. The dancing, the music, all the hard work that went into this epic vision: I thank you all.”

“This was over the top awesome. If they ever come back to a theater in Branson, do not miss it.”

“This performance was AMAZING! Heartfelt dancers with a passion! I got chills watching their love for dance and the Irish heritage come together!”

“I was overwhelmed by the performance of Celtic Throne and echo the comments of those who expressed their admiration for the whole the show. The lead dancer is the best that I have ever seen. I watched the Epic Irish Dance Street Performance in Dublin when I was there a few years ago and Celtic Throne far surpassed that delivery.”

“We watched the first livestream last week and were so amazed and awe-inspired that we just had to watch it a second time—even if it meant watching it at 3 a.m. It’s been the earliest that my two boys have had to get up, but they didn’t mind it at all and were actually so eager to do it a second time!”

—Patron from the Philippines (e-mail)

“It was very good. The choreography, the dancing, the music, I love it all. We’ve never been here before or have ever seen anything like this. It has been amazing.”

“I particularly enjoyed the harp, and the trio of the men singing was very nice.”

“I thought it was awesome. Having been to Ireland and seeing the cliffs, I am just partial to Celtic music.”

“It was magnificent. … I like the tap dancing. The music was beautiful.”

“We are just impressed with—first of all, the venue—and also the costumes are absolutely amazing, very nice. And the quality of the dancing is just excellent: We are really enjoying that part of it.”

“This is a wonderful, wonderful venue for our community, so we are thrilled to be here. Thank you.”

“[M]y adrenaline is pumping right now: I don’t even know what to say. But it was just very masculine dancing, I thought that thunder and lightning show was very powerful. … We are going to get tickets for next week too.”

“We thought that it was fantastic. It was dynamic, and I can’t believe two hours went by.”

“I thought it was awesome and beautiful. It is like Branson-style entertainment: It is quality entertainment.”

“It was much more spectacular and grand than I expected. I just loved the overall theme of it.”

“It was absolutely amazing, if you didn’t want to dance, something is wrong. I saw that, and I wanted to jump on stage. Moving my arms and flexing my arms, I almost kicked somebody in front of me. It was amazing: I loved it!”

“The show was spectacular, and one of the best ones we’ve seen here.”

Future performances of Celtic Throne are being planned.

Click below for more Celtic Throne interviews and reactions.