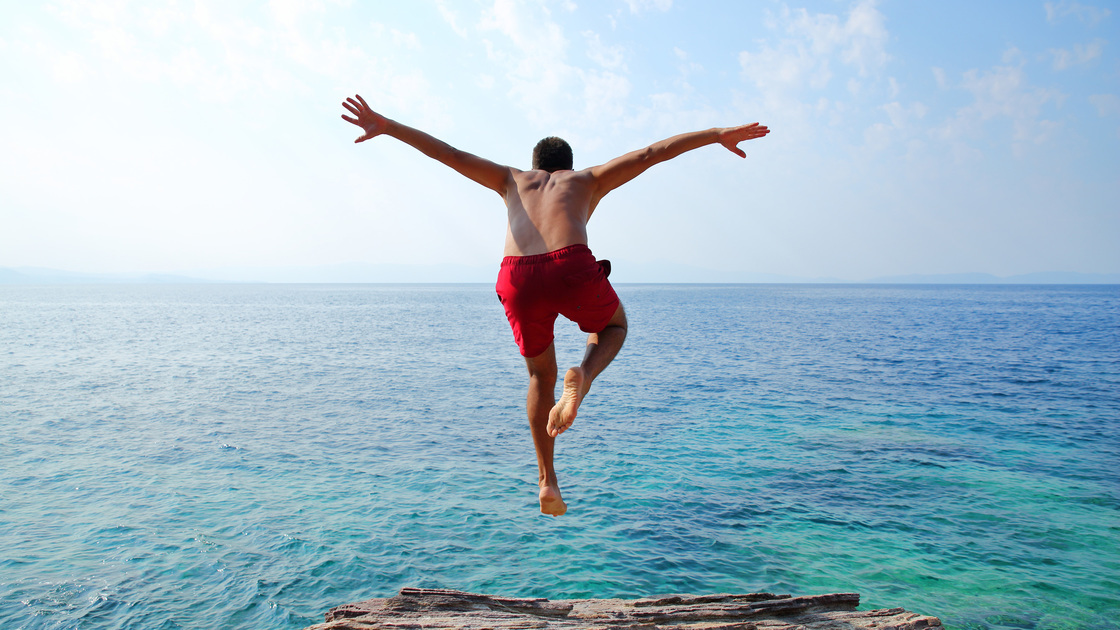 In the summer of 1986, I had the chance to be a canoe trip leader for a boys’ dorm at the Summer Educational Program (sep) in Orr, Minnesota. I wasn’t long out of my teens at the time, and it was a fairly big responsibility: Under my command, I had two voyager canoes full of gear and an eager group of young teen boys. We went out into the wilderness for four to five days at a time, and these boys would rely on me for everything from instruction in how to paddle a canoe properly to how to prepare food. This was a great opportunity—but on one particular trip, I made a poor decision that brought home a powerful life lesson for me. On that day, I learned the importance of looking before you leap.

The sun was shining brightly, the mosquitoes were out in force, and the light breeze swept across our faces with the freshness you would expect from a gust of wind off the cool water. We had pulled ashore at a beautiful spot, sitting atop a small island at the east end of Lake Namakan, at the mouth of the Namakan Narrows heading down to Sand Point Lake. At this point, there was a 25-foot cliff that was perfect for jumping, and as boys tend to do, we gave in to the urge to take the plunge. After we had been at this activity for quite a while, we heard a sound around the bend.

It was the sound of canoes coming. As they approached, we could hear the splash of the paddles slicing the water and the chatter of voices. But unlike the voices we had become accustomed to hearing over the past several days on an all-male trip, these were higher-pitched and … girlish.

As they pulled around the bend, we could see that it was a girls’ dorm. But this was not just any dorm—this was our sister dorm. We were a group of young guys, and as we were eager to show our manhood to the first specimens of the fairer sex we had seen in days, I immediately concocted a plan: All of us would pull off one great synchronized jump into the water. The suggestion was immediately greeted with approval. So we lined ourselves up along the cliff, counted off, and cannonballed as one man into the awaiting depths.

As we rose back to the surface after our massive splash, we could see the girls scrambling in their packs trying to find their cameras. Obviously they had been suitably impressed by our manly prowess, and now wanted to capture it for posterity. We were only too happy to oblige, repeating the feat a few more times.

Now, we would have been fine if we had kept to this. However, this story has an interesting twist. You see, the trip leader for this group of girls had been my counselor back when I was a camper in 1979. More recently, he had been responsible for playing a very nasty trick on me. Right now, he was taunting me in front of all of these young, impressionable campers. Naturally, payback was due, and a plan began to form in my mind: a plan of revenge. How sweet it would be—or so I thought.

I convinced about ten of the camper guys to come with me to the cliff edge to put the plan into action. As the canoes came closer, we crouched atop the cliff, poised to strike as soon as they came within range. Slowly they came, ever closer, until they were just close enough—and we pounced. It was a thing of beauty. Eleven young men went flying through the air with synchronized grace, curled up into cannonballs to make the biggest impact on the water possible. We were going to soak these girls and their trip leader with a tidal wave.

When I came back up and broke the surface of the water, I saw the canoe, but not as I expected. I was looking at the bottom, and not the top. All the girls were flailing around it in panic, their belongings floating away or slowly sinking to the bottom of the lake. We immediately went into recovery mode, salvaging as much as possible from the wreckage. I nearly drowned myself pulling the tent bag back to the surface. We had to sleep in wet sleeping bags that night as we felt obliged to give the girls our dry ones.

I had not fully considered the impact of my decision. I had not looked before I leaped, and my actions jeopardized the safety of many people.

How often in life do we make rash decisions based on wrong reasoning, wrong desires, vanity, pride, showing off, revenge or even just plain stupidity? To put it another way, how often do we look before we leap, and how often do we just jump over the edge without considering the consequences?

Christ talked about this during His ministry on Earth. In Luke 14:25-26, He spoke about counting the cost—looking ahead at the consequences of our actions. What effect will our actions have on the lives of others? On our own lives?

The decision-making process is unique to mankind. Animals use instinct to make decisions, but we have the human spirit (completed by the Holy Spirit) that allows us to make considered choices. This does not mean that we always will, though. In fact, even if we are baptized, we still are not guaranteed to make wise decisions. How can we make wise decisions? There is a simple, five-step process we can follow to help us make wise decisions.

God is the source of all wisdom. In fact, He gave exceeding wisdom to Solomon when he asked for it. In 1 Kings 4:29, we see that God showered Solomon with wisdom. He promises to do the same for us in James 1:5. We can use that wisdom as our guide in making right decisions.

Proverbs 11:14 warns us of the pitfalls of depending on our own wisdom. It tells us that “in the multitude of counselors there is safety.” We do have to beware, though. We must ask people who know something about the subject. The example of Rehoboam is recorded for us in the Bible, where he first asked the wise elders who served under his father about how to gain the respect of the people. They advised him to lower the tax burden on the people. However, when he went to his younger peers, inexperienced in rulership, they advised him to raise taxes. He followed the foolish counsel of his peers and caused the split of the kingdom of Israel (1 Kings 12:6-19).

Where should we turn for counsel? After asking God for advice, we can ask our parents and the ministry for advice. They are older and have the help of the Holy Spirit to guide them in how to counsel us. Finally, after we have consulted with the “hoary heads,” we can consider asking our friends for advice. A true friend will not tell us just what we want to hear, but the truth about where our decision will lead us. Talk to friends who are rooted and grounded in God’s truth, who are locked into the source of all wisdom. Be careful not to fall into the trap that Rehoboam fell into—rejecting the advice of your older, wiser parents in favor of reckless advice from your friends.

We can’t make wise decisions based on speculation, supposition and half-truths. We can’t receive wise counsel if we manipulate the facts we present to suit our desires.

In a member/co-worker letter dated Feb. 22, 1974, Herbert W. Armstrong wrote: “I have always tried to follow the biblical admonition that in a multitude of counselors there is safety. I have always tried to follow the principle that I learned as far back as 1915, to get all the facts before a decision. God called and chose me to get His gospel of the Kingdom to the world, and to be used in raising up His Church for our time to help get that great commission done!

“The living Christ, the Head of God’s Church, has guided me. He has never let me make a fatal mistake or a major wrong decision—but rather only minor errors when I was caught ‘on the run,’ as it were, with something else on my mind, and gave a quick decision without sufficient facts or study. But I try to call for counsel and advice—and especially the facts.”

The human tendency in these kinds of situations is to omit the pieces of the story that would make us look bad or sway the counsel away from the result we want. There is a proverb about this: “He that is first in his own cause seemeth just; but his neighbor cometh and searcheth him” (Proverbs 18:17). We tend to color the truth to suit our own desires. We must prevent this by observing and presenting the facts without bias.

Write down a list of reasons for and against. Remove all bias—don’t have a conclusion in mind and only list the things that support your predetermined point of view. If it’s a quick decision, evaluate the pros and cons quickly in your head. Determine which side outweighs the other.

I didn’t do this. I never paused long enough to ask myself if I should jump off the cliff. Was it really a wise decision? I didn’t pause long enough to consider it this way. Use that tool of the pros-and-cons list to evaluate your decisions before you commit.

If we make small wise decisions, we will be well-practiced in the process of decision making when the big dilemmas come. Use the steps of this process for the little things we do every day. Think: Should I send this text, or not? Should I really be making this comment to my sibling? Is this the decision that God would make? Eventually, the choices will become bigger—for example, Should I really be showing off burning rubber in my parents’ car? If we have practice in the small decisions, this will increase our odds of making better decisions in the future.

We must have practice and a certain amount of godly confidence in our ability to make the decision that God would.

This is by no means a complete list of the points to follow in making the right decisions in your life, but it is a good starting point. The next time you find yourself confronted with a choice, don’t do what I did on that fateful day back in 1986. Follow these steps in every decision that you make—and if you don’t remember every step at the time, remember this one lesson I learned:

Look before you leap.