Are You an ‘Enigma Friend’?
Claim your legacy of encouragement!
By Seth Malone • April 30, 2020 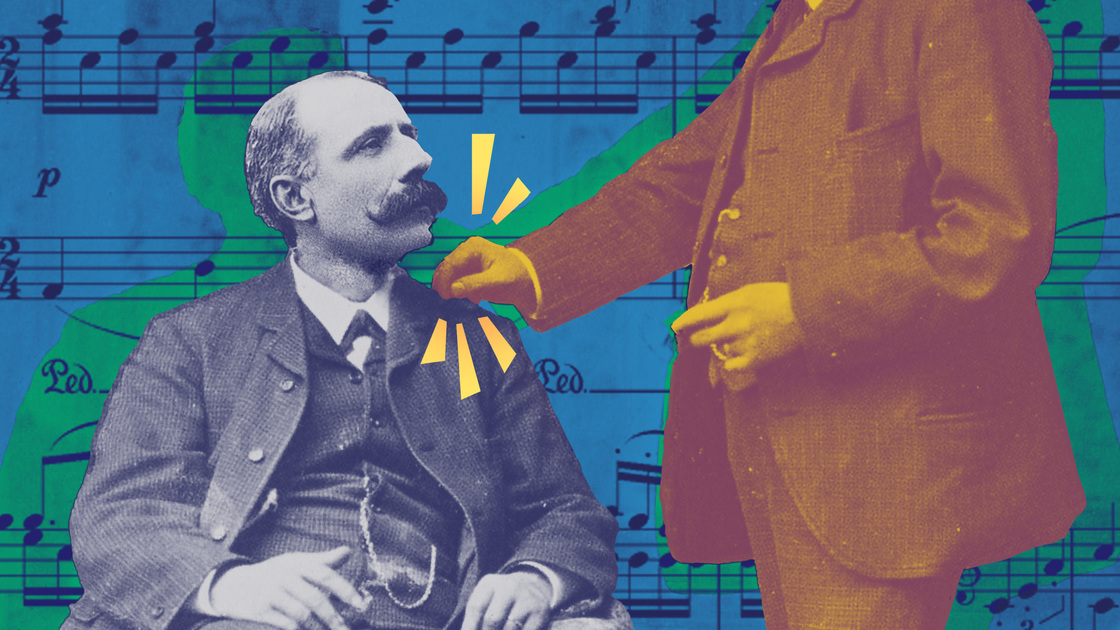 It is not always easy being a musician. Every performer knows their business is a tough one. Countless musicians and composers throughout history have gone through depression, poverty, loneliness and discouragement, and very few of them have ever reached any lasting success or fame.

Edward Elgar, an English composer at the turn of the 20th century, faced such discouragement. His musical career had not yet garnered a lot of attention. Sure, he had good reviews, but that’s all he had: good reviews. The general public had not taken a lot of interest in Elgar. And when one’s job literally depends on public interest, it can be hard to stay encouraged, let alone make ends meet, when one only has “good reviews.”

Elgar had a few friends though, closest of which was his publisher, August Johannes Jaeger. He often expressed his frustrations with Jaeger over long talks and letters. Jaeger wasn’t a flatterer. He often gave Elgar constructive criticism, but overall, it was a helpful and encouraging relationship.

There came a point when Elgar got so depressed and so discouraged that he wanted to give up writing music. He was done composing. Understanding his friend’s discouragement, Jaeger paid him a visit. That evening, he reminded Elgar of the admirable composer Beethoven. Beethoven was another composer who faced discouragement and depression. He was abused as a child, faced many financial failures, lost a brother, and even became deaf—what would surely discourage him enough to stop composing. But he did not, and he became one of the most celebrated composers in history.

“And that is what you must do,” Jaeger sang to his friend, singing a melody composed by Beethoven himself. Elgar decided, despite his near-failure, to continue composing.

Right before the turn of the century, Jaeger wrote him a letter, assuring him, “A day’s attack of the blues, due to a touch of indigestion or a blast of eastwind, will not drive away your desire, your necessity, which is to exercise those creative faculties which a kind Providence has given you. Your time of universal recognition will come.” This was hard for Elgar to believe, but he appreciated the encouragement.

It was around this time that Elgar began composing a work for orchestra titled Enigma Variations. He first gained inspiration for the work when, one evening, his wife heard him playing a beautiful melody on the piano. Upon her expressing interest, he began to improvise several variations mimicking some of their close friends’ personalities. He liked the idea, and he began his next composition, dedicated “to my friends pictured within.”

These “enigma friends” were friends who, despite his discouragement, stuck by Elgar’s side. He wrote the first variation to his wife. After hers came variations dedicated to other musicians and friends he had worked with closely, one of which was Jaeger himself. The variation dedicated to Jaeger was titled Nimrod (nothing related to pagan rebellion, but simply because Nimrod was a hunter, and the name “Jaeger” is the German word for “hunter”). Elgar did not write Nimrod as a portrait of Jaeger, but rather as a memorial of that very evening where Jaeger reminded him of Beethoven and encouraged him to continue composing. Nimrod’s melody even closely mimics the Beethoven melody Jaeger sang to him that evening.

The final variation Elgar wrote was for himself. However, in this variation, Elgar quoted the variations dedicated to the very closest of his encouraging friends—his wife and Jaeger.

On June 19, 1899, Enigma Variations premiered, and audiences absolutely adored it. It impressed world-famous composers in Russia and in Germany. Not only would Enigma Variations become one of his most famous pieces, but it was that very work that kick-started his “time of universal recognition.”

Living God’s way of life is even harder than making a living as a composer. “Because strait is the gate, and narrow is the way, which leadeth unto life, and few there be that find it” (Matthew 7:14). We constantly face persecution from Satan, society and ourselves. Jesus Christ made this abundantly clear throughout His ministry. We are going to face trials, and humanly, it is easy to get discouraged.

After great success with Enigma Variations, Elgar began work on the Pomp and Circumstance Marches, making him one of the most celebrated composers in the British Commonwealth to this day. The melody in the first march is commonly known today as “Land of Hope and Glory,” routinely heard at the bbc Proms, international rugby league matches, and Premier League events, even serving as a popular alternative to “God Save the Queen,” “Jerusalem,” and “Rule, Britannia!” as a proposed English anthem. For those in the Philippines, Canada or the United States, this same march is played at virtually every public high school graduation.

Not long after, on July 5, 1904, Elgar was knighted by King Edward vii in Buckingham Palace.

What’s more, of the many amazing variations to come out of Enigma Variations, the “Jaeger” variation stands out as the most popular and famous variation to this day.

Success is right around the corner, so much the more as we see the day approaching! Yet that also means times have never been tougher. There has never been a time quite like this to begin building a legacy of encouragement. Our friends need it. We need it. Look where it all ends! The time is now. Are you an “enigma friend”?