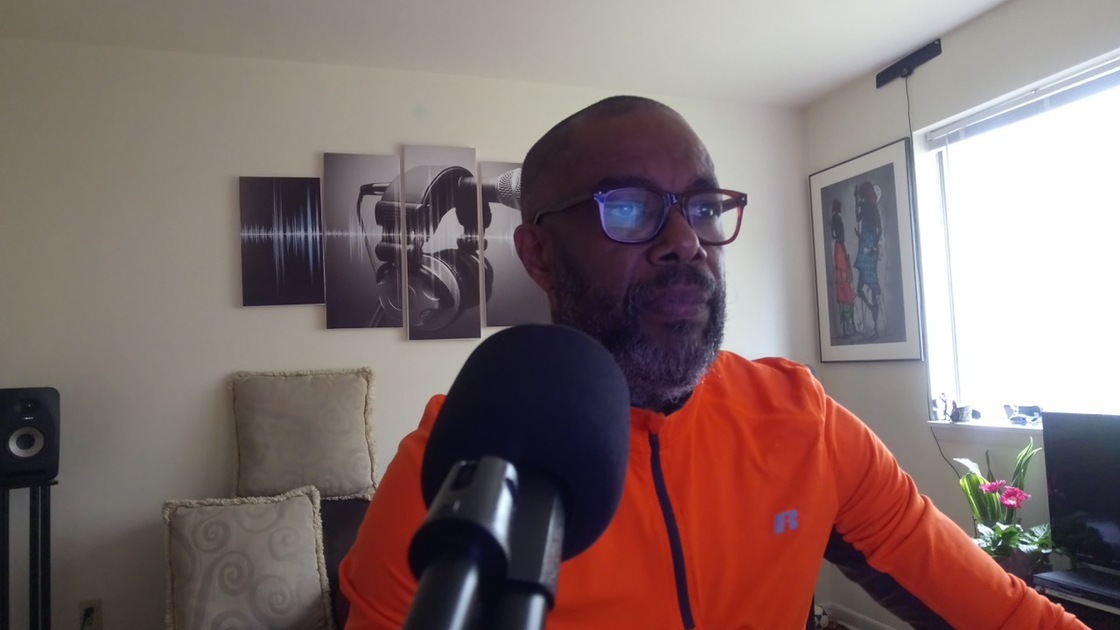 EDMOND—Early in the morning, he gets up. He makes sure the air conditioning is off and hopes, and literally prays, that the neighbors in the other apartments will stay asleep for a good while longer. He opens the door to his closet, goes inside, closes the door and clears his throat.

“Sound the alarm! An army is coming!”

This is Michael Strachan, and no, he is not confused. His closet doubles as a recording studio, with jeans doubling as acoustic panels, and he is recording the story of the Bible.

Standing before his microphone reading from his tablet computer, he’s a world apart from the subject he is describing into his super-sensitive microphone. But he is right there in the action in his mind and voice, and so too will be his listeners. He is trying to make The Bible Story come alive.

The Bible Story was originally produced in six volumes by Herbert W. Armstrong and the Worldwide Church of God, which still holds the copyrights. The Philadelphia Church of God has produced seven additional volumes, covering Bible history from King David through the apostles.

Strachan, who has worked in radio full-time or part time since 1993, lives in Virginia, where he is heard on wmra on National Public Radio’s Weekend Edition on Sundays. He also does commercials there in his home studio, in addition to other work. After leaving other radio work to avoid conflicts with Christmas, he did work for a university, but the coronavirus lockdown closed the school and he was furloughed in early March.

Strachan said he wanted to use the extra time, and prayed about it for a while. He tried a couple ideas relating to radio, podcasts, humor, business—but he wanted to do something more meaningful, and, in particular, for children.

“I like being around children,” he said with his ever-present relaxed and hearty laugh. “In fact, I enjoy it more than they do!”

He and his wife, Isabela, continued to think and pray about the issue. “God, I know you’re going to answer our prayers,” he said. Not long after that, it gradually became more clear.

Just one week ago, he e-mailed pcg editorial department manager Joel Hilliker with an idea for narrating podcasts of TheBible Story. After checking with his local minister as well, he sent a sample from Volume 1. “It was fantastic,” Mr. Hilliker said. “Instantly captivating. Really special.”

Since the PCG does not own copyrights to the Bible Story’s first six volumes, Strachan then recorded Chapter 100 the next day. After the holy day on Wednesday, kpcg station manager Dwight Falk spent much of Thursday producing the full program, including sound effects. And just today, Strachan recorded an intro and outro (and interviewed for this story and snapped a photo), the information services and art departments quickly added the show to theTrumpet.com, and the first episode was posted.

“I love stories. Even if I was half asleep, my daughters wouldn’t let me go to sleep; they always wanted a story,” he recalled.

“You can learn a lot from The Bible Story. I want people to enjoy it, and not just for children, but even preteens and adults,” he said. “It should be something entertaining, I hope it helps someone, but most of all that it draws us closer to God.”

That’s the story of how an idea became KPCG’s newest podcast in a week’s time. But, as you are about to find out, that story is nowhere near as dramatic, enjoyable and meaningful as the history of the Bible, brought to life.

Listen to The Bible Story (Volume 7, Chapter 100): “David Wants to Build the Temple.”