True Education on Homosexuality
“It’s okay to be gay or lesbian.” That was the slogan of a $60,000 poster campaign sponsored by the Toronto District School Board …
By Eric Anderson • April 25, 2013 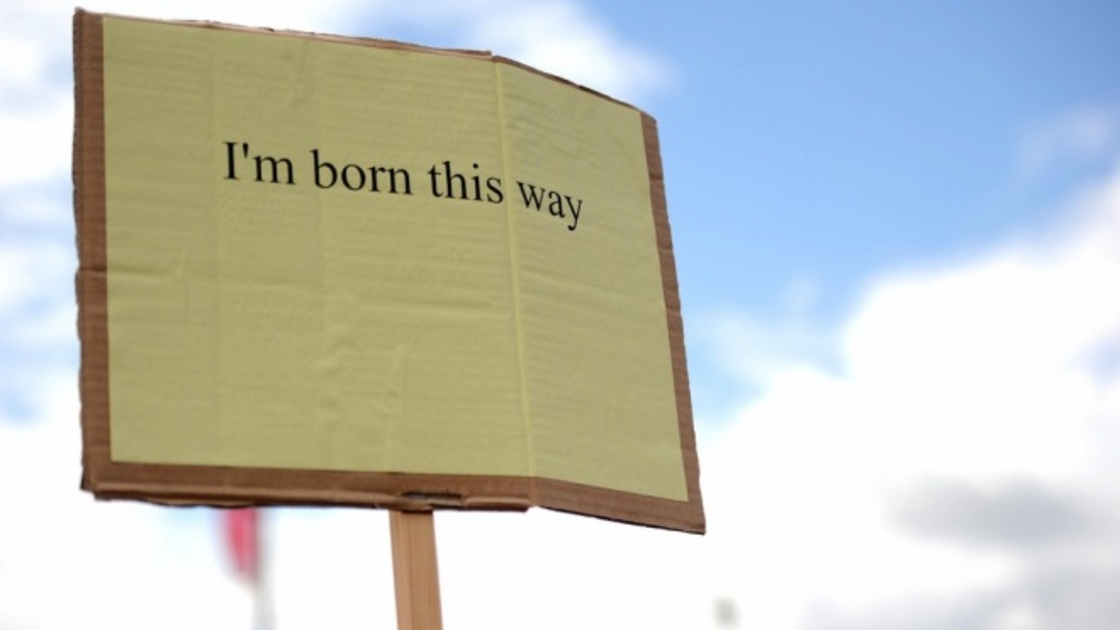 “It’s okay to be gay or lesbian.” That was the slogan of a $60,000 poster campaign sponsored by the Toronto District School Board a few years ago. The posters, which encouraged Canadian youths with homosexual tendencies to “come out of the closet,” were plastered on walls in classrooms from Grade 7 and up.

Around the same time, a 12-page booklet titled “Just the Facts About Sexual Orientation and Youth” was mailed to all public school districts in the U.S. The primer, authored by the American Psychological Association, contends that homosexuals are “normal” and definitely not “mentally unhealthy” people. The publication also states that homosexual students can be harmed by therapy aimed at changing their behavior because “it can provoke guilt and anxiety while having little or no potential for achieving changes in orientation.” The booklet, however, omits important facts about the homosexual lifestyle and fails to address health risks and other concerns.

There has been a lot of experimentation with homosexuality among teenagers in past decades, but the trend grew exponentially worse in the latter part of the 1990s—and has in the last decade exploded into the mainstream. Indiana University’s Kinsey Institute for Research in Sex, Gender and Reproduction says that 60 percent of boys and 30 percent of girls have had an intentional homosexual experience by age 15. Another report says that 100,000 young people in the U.S. between the ages of 13 and 21 are now infected with hiv. Even to the casual observer, it’s obvious that homosexuality and bisexuality is becoming increasingly popular among teenagers and young adults in our anything-goes society. In fact, each week the news reports in America, Australia, Canada and Britain contain stories about more and more young gay couples clamoring to marry each other.

The acceptance of homosexuality is a sign of moral sickness and decay—nationally and individually. This problem must be squarely addressed early in life, because many times it is in the teenage years, during rapid sexual development, that this tragic problem starts or becomes a deeply embedded habit. But these days not many religious or secular leaders are willing to stick their necks out and “tell it like it is.” We at this website feel compelled to be candid and frank in discussing the issue as Almighty God reveals it in the Holy Bible.

As we’ve pointed out in previous articles, the Bible is God’s instruction manual for abundant and happy living. But are we willing to listen to what Scripture reveals about homosexuality?

In both the Old and New Testaments, male and female homosexual acts are denounced as abominable, unnatural, vile perversions. Be sure to read all of the following verses: Genesis 19:1-13, Leviticus 18:22, 20:13, Judges 19:22-24, I Corinthians 6:9-10, I Timothy 1:9-10. In no scriptural reference is homosexuality approved!

In the book of Romans, the Apostle Paul speaks of a people who “deliberately forfeited the truth of God and accepted a lie…. Their women exchanged the normal practices of sexual intercourse for something which is abnormal and unnatural. Similarly the men, turning from natural intercourse with women, were swept into lustful passions for one another…receiving, of course, in their own personalities the consequences of sexual perversity” (Romans 1:25-27, Phillips translation).

God’s vision of family and love is spoken of throughout the Bible. But it was prophesied that, in the end time, attitudes about family and love would change for the worse: “This know also, that in the last days perilous times shall come. For men shall be lovers of their own selves, covetous …disobedient to parents, unthankful , unholy, without natural affection…lovers of pleasures more than lovers of God…. From such turn away” (I Timothy 3:1-4). God wants us to avoid unnatural and unholy things—especially those that destroy families.

Think about it: Why would a wise Creator God design humans to be attracted to a member of their own gender? He wouldn’t. The Genesis account shows that our first parents, Adam and Eve, had a natural attraction for one another. And any good high school anatomy class supports the fact that a man and woman are compatible physically and can produce offspring. It was God’s original intent and purpose for man and woman to be sexual partners—not man with man or woman with woman.

Many homosexuals assume they were “born that way.” And certain scientists claim that there are “homosexual genes.” But human beings are not born with an inherited sexual orientation or instinct that drives them toward homosexuality. Genetics and hormones do play a part in developing human sexuality—but not in the way many suppose.

Several factors contribute toward a person becoming a homosexual. In many cases, they are exactly what cultural, parental and personal experiences have made them. But the root cause is often a lack of true education.

A variety of forces in the world are responsible for this void. Some are intentionally trying to change the traditional concept of family life and right views on sex; others simply act out of ignorance.

Certainly public schools and colleges are partly at fault. The reason today’s schools don’t know how to deal with the root cause of homosexuality is because they eliminate from their curriculum the best textbook on Earth: the Holy Bible. In its place, the unprovable theory of evolution is planted, ready-manufactured, into the absorbent minds of youths. That concept dominates every branch of study—and it is the concept that denies the miracles of the Bible and rejects the authority of God’s revelation. As a result, many schools end up making sexual problems among students even worse.

Religion also shares the blame. Like the schools, today’s churches have proven themselves incapable of solving the homosexual problem. Numerous mainstream Protestant denominations are currently engaged in serious public dialogues, even debates, over the nature of homosexuality, the ordination of openly “gay” members into the clergy and even same-sex marriages. In general the churches fail because they, too, neglect to look honestly at the Bible for God’s view on homosexuality. They rely upon the traditions of men rather than God’s commandments (Mark 7:9).

The absence of right sex education in the home is by far the major reason some teenagers develop into homosexuals. Homosexuality is fundamentally caused by the lack of a warm, loving, father-led marriage and family. Young people left without correct instruction regarding sexual conduct often develop distorted views of sex and relationships with their own and the opposite sex.

How to Avoid Sin

God is very concerned about the cultural and family environments of human beings. It is God’s will for us to prosper and be in good health. He doesn’t enjoy seeing us suffer from emotional scars, venereal diseases or aids.

He, therefore, commands us to avoid the serious sin of homosexuality—a sin that wreaks havoc on families and the individuals involved. The use of sex within marriage between a man and a woman is the only God-ordained pure expression of romantic love. Many people will disagree, but God’s laws are not mocked (Galatians 6:7). (Our free book The Missing Dimension in Sex fully explains why sex was created.)

Many teens seek excitement—something to fill the emptiness or loneliness of their lives. They want to feel needed and accepted; they want to feel that they have worth. Whenever wrong sexual or emotional seeds are allowed and cultivated in an attempt to fill these needs, they will grow—even into adulthood.

Anyone can be tempted by a fleeting thought to commit a wrong sexual act. That is a temptation. But it becomes a sin if it is given in to and allowed to stay in the mind. Allowing lusts to continue in your mind is dangerous, because thoughts usually lead to actions. Jesus Christ taught that it is a sin even to look at someone else in lust (Matthew 5:28). Lingering thoughts or fantasies about illicit sex can develop warped feelings or desires and cultivate evil practices that are nearly impossible to break.

All teens need to be on guard. Every form of pornography and sexual experimentation should be avoided. And every teen should recognize the dangers of having damaging thoughts and daydreams. Having those feelings doesn’t mean you are homosexual—but it does mean you should diligently guard your mind and body against wrong thoughts and wrong sexual acts.

Controlling your thoughts and actions, especially in the area of sex, is difficult. But it can, and must, be done. It takes conscious effort and work. The price for such sins—unhappiness, disease, loneliness, despair—is far too high to pay.

Here’s the key: If you have a wrong sexual thought, put it out of your mind immediately. Do not dwell on it. God says to bring every thought into captivity to the obedience of Christ (II Corinthians 10:5). It doesn’t mean that you won’t have wrong thoughts from time to time. But when you do have them, you must put them out right away. Only you are in control of your mind. Only you can choose to avoid sin.

If you have already begun experimenting or have developed a wrong relationship with someone, break it off immediately. Don’t let wrong thoughts remain in your mind. If you can’t make that break by yourself, get help. Talk to your parents or a minister. Don’t allow the practice to become all-consuming.

Let’s be realistic. Homosexuality is now out in the open. Most everyone is perfectly okay with it. You may see couples at your school, or have a homosexual teacher—maybe even some of your friends are homosexual. It is everywhere.

How should you handle that?

First, you must establish in your own mind what is right and what is wrong. Homosexuality is sin. There is no gray area. God clearly condemns it in the Bible. Under no circumstances is sin okay. And no amount of public acceptance will change God’s mind.

Second, it is important to acknowledge that everyone sins—including you (Romans 3:23; I John 1:8). The same Bible that condemns sexual sins also lays out clear guidelines for our relationships with other people. The fact that someone is sinning does not give you or anyone else license to make fun of, harass or physically harm them in any way.

There is a specific instance in the Bible where, within one of the congregations in God’s Church, a man was committing a horrible sexual sin (I Corinthians 5). The Apostle Paul commanded that no one associate with him, and that man was put out of the Church.

But read what Paul said next, in verses 9-10. Dismissing someone from the Church is one thing, but you can’t disassociate yourself from everyone who does such things in the world, or you’d have to remove yourself from the world completely. That is contrary to what Jesus Christ Himself prayed to God the Father in John 17:15, “I pray not that thou shouldest take them out of the world, but that thou shouldest keep them from the evil.”

Trying to live right, while being in the middle of people living wrong, is difficult. It requires self-control and wisdom. That said, the final point is that you do need to choose your friends wisely. Your close friendships should be with those who have values like your own, who will help you grow in character, not break it down. Yes, everyone sins—but at the same time, you must make judgments about who is trying to live according to biblical principles and who is not. The fact that someone is homosexual doesn’t mean you have nothing to do with them, but wisdom dictates that the relationship be limited.