Learning Cursiverance
By sticking to your goals, you can achieve beautiful results.
By Rebekah Goddard • April 23, 2020 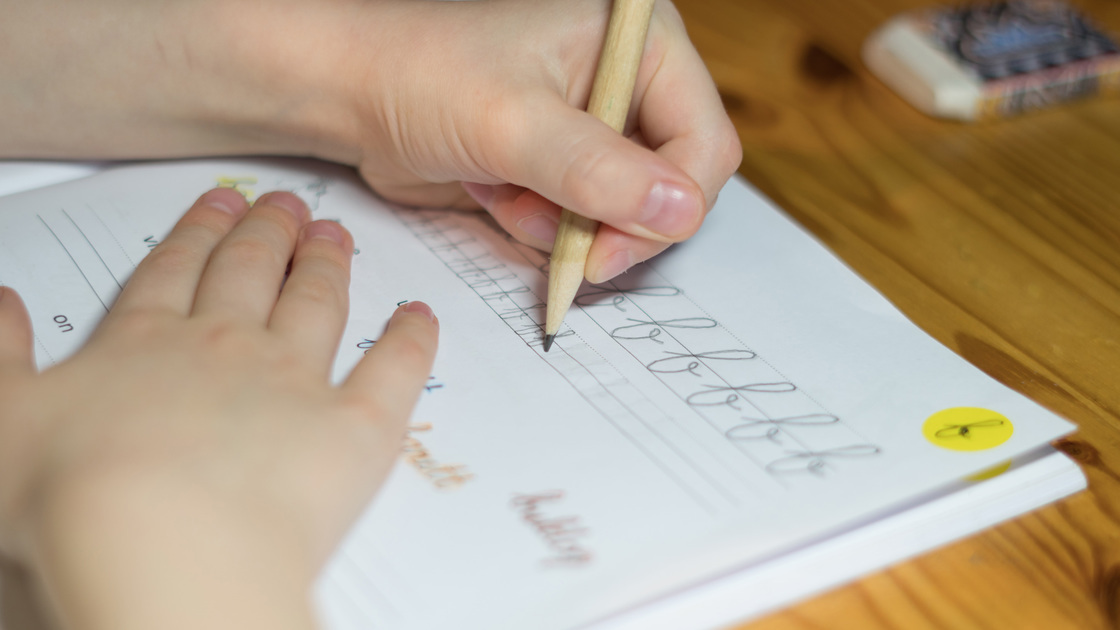 I stared at the paper, wishing my dyslexic brain would make up its mind. My eyes blurred the symbols that had delighted me just moments ago. This wasn’t going to be as easy as I had thought.

I had sat down at the dining room table, eagerly swinging my legs in my seat as my mom pulled out a fresh sheet of paper and carefully drew the symbols and their corresponding letters. This was it. I was going to learn cursive. As my mom rested the paper in front of me, my excited eyes cursorily glanced at the paper before I started copying its symbols. Pencil gripped tightly, I examined the first symbol. Okay, that looks like an “a,” just with a little curl. I clumsily copied the letter and moved on. I guess that looks like a “b”; that’s definitely a “c”; so on. Then I paused, confused by what I saw. There was the lowercase letter “l,” but the cursive letter—that was the symbol for “b.”

“Mom?” I called out. This had to be some sort of mistake. She must have accidentally written the cursive “b” again. When my mom came to my side, I explained the problem to her.

Much to my chagrin, she had not mixed up the letters. “They’re different. Do you see?” she said and pointed to the “b.” “This one’s got another loop; it comes back up. The ‘l’ doesn’t have the extra bit. See?” I did not see. They’re both just loops! But I nodded hesitantly and moved on. It only got harder from there: The “n” had two bumps like an “m,” and the “m” had three bumps. “R” and “s” seemed to be completely made up, and what was the deal with the “z”? I hadn’t even made it to capital letters before I was ready to give up.

My mom tried to console me, but I had given up on my ability to learn cursive. “Maybe we should just wait until you’re in second grade.” At her resigned words, my heart stopped. Even with my defeatist attitude, being told to give up was the equivalent of a death sentence to my six-year-old mind. I had to learn cursive—my older sisters could already read and write it. I couldn’t stand the notion of waiting a whole year. No, I had to learn cursive now, I decided. Stubbornness played a factor in my determination. But it was not going to come easy to my young, unlearned mind. It took perseverance, but I was going to learn cursive even if it was by sheer willpower—and a lot of patient teaching on my mom’s part.

But the six-year-old mind is fickle. Within moments of my decision, I regretted it. It was too hard, I complained. Each penmanship test marred with red ink seemed to drive this point home: This was a hopeless cause. But now my mom wouldn’t let me give up. If anything, my sulky attitude toward learning cursive made her more adamant that I would tough it out. And gradually, the symbols began to make more sense to me.

I did eventually learn cursive, but it took a lot of perseverance. My mom taught me more than just how to write in cursive. She taught me not to give up if something appeared difficult. None of us can underestimate the value of sticking to our goals. In his book, The Seven Laws of Success, Herbert W. Armstrong identifies the sixth law as perseverance. He wrote that most people, upon confronting an insurmountable challenge, “give up and quit, when just a little more determined hanging on, just a little more faith and perseverance—just a little more stick-to-it-iveness—would have turned apparent certain failure into glorious success.”

We all face challenges, many of which are considerably harder than learning cursive, but the principle of perseverance is applicable in every area of our lives. If we are faithful in the least of things, we will be faithful in much. If we work to persevere in even the smallest of tasks, it will show when we face the largest of challenges.

To achieve anything, we must have the conviction to stick to the task, no matter how difficult. If we persevere and stick to the goals we set ourselves, we can achieve beautiful results—just like learning cursive.