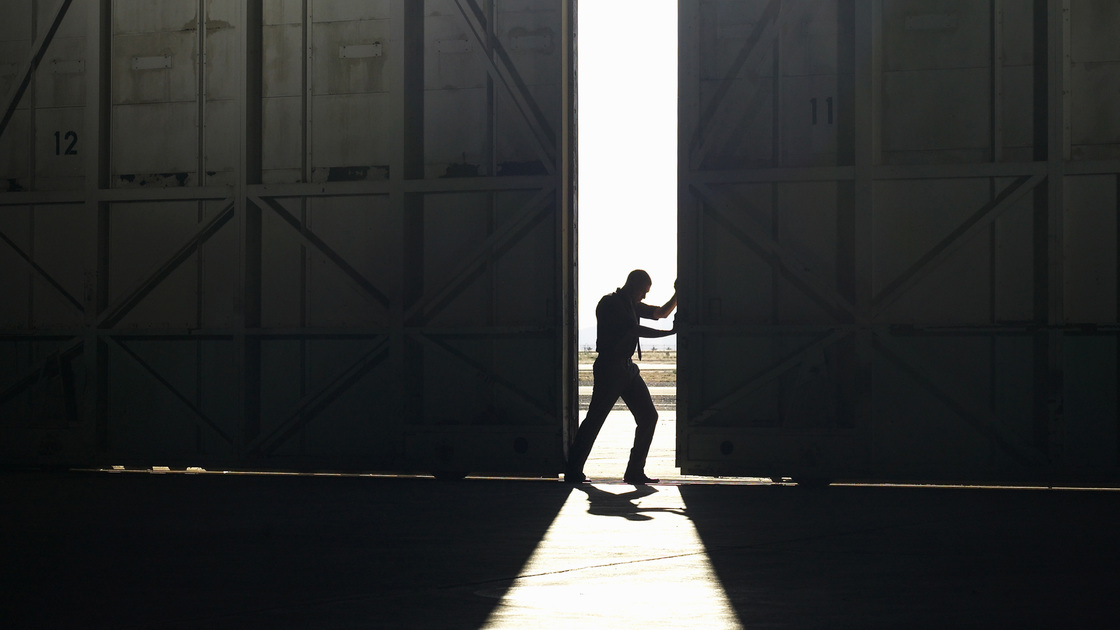 We were stuck. Stranded on a tarmac in Fiji on the Philadelphia Church of God’s G-450 aircraft with my sister, the two pilots, and my grandfather, pcg Pastor General Gerald Flurry, I had already given up hope. There was no way we could make it to Australia in time to observe the Passover that night.

Leading up to the 2018 spring holy days, my grandfather dealt with weeks of delays while trying to get approved for a travel visa. My sister, Paris, had no issue. Neither did I. The pilots were fine. But Grandpa couldn’t seem to acquire permission to enter Australia. He would have to decide whether to fly to the other side of the world despite lacking the necessary paperwork.

This situation would have been enough to convince me to call off the journey right away. (This is just one reason why I don’t make such decisions.) But Grandpa plowed right ahead with the original objective.

Once we landed in Fiji, we found out that Grandpa still hadn’t gotten the green light to fly to Australia. (He was hoping to receive good news upon our arrival in Fiji.)

Creative alternative plans popped into my head: We could debark from the plane with our plastic tubs, towels and Bibles; check into a hotel nearby; and keep the Passover in one of our rooms. We could even stay on the plane for Passover, then sleep onboard overnight. Since the Philippines and New Zealand would let Grandpa in, we could fly to one of those nations for Passover with other Church members.

In my masterful brainstorming session, I overlooked one option: continuing on to Australia. Grandpa was determined to stick to the original plan, no matter what (without breaking man’s laws, of course). I had abandoned the mission; he had become even more focused on completing it.

Many phone calls were made. E-mails were sent. At last, a solution was achieved. Thankfully, a Church member in Australia with experience as a pilot called the airport where we were supposed to arrive and quickly convinced the officials there to expedite Grandpa’s visa approval. We flew into Brisbane just in time for the Passover, then rejoiced with the Australian and Filipino brethren during the Days of Unleavened Bread. The trip itinerary remained exactly as it was first organized.

For the last two years, I have often thought about this story and what it revealed about me: I tend to be a bit of a quitter. God provides open doors for His Work, especially when His loyal Philadelphians pray hard: “At the same time, pray also for us, that God may open to us a door for the word, to declare the mystery of Christ, on account of which I am in prison” (Colossians 4:3; English Standard Version). That trip to Australia and the Philippines was an open door to strengthen far-flung members of God’s Church.

God makes this inspiring promise to true Christians in this end time: “I know thy works: behold, I have set before thee an open door, and no man can shut it: for thou hast a little strength, and hast kept my word, and hast not denied my name” (Revelation 3:8). This promise applies to God’s Work. But if you examine your personal life, you will notice plenty of open doors there too. It could be a job opportunity, a potential friendship, or a chance to build godly character by conquering a lingering weakness.

But let’s be very clear: I’m talking about doors that have already been opened by God—not doors that are closed and locked. “Ask, and it shall be given you; seek, and ye shall find; knock, and it shall be opened unto you” (Matthew 7:7). God has the master key; He opens the doors. We don’t! When we try to open doors all by ourselves, disaster often ensues.

Just because God opens doors doesn’t mean they will be easy to walk through. “Enter ye in at the strait gate: for wide is the gate, and broad is the way, that leadeth to destruction, and many there be which go in thereat: Because strait is the gate, and narrow is the way, which leadeth unto life, and few there be that find it” (verses 13-14). The Christian walk is straight and narrow—far more challenging than living according to our own wills and whims.

Besides asking God directly in prayer for open doors, we can also benefit from another valuable resource: counsel with God’s ministry. “Obey them that have the rule over you, and submit yourselves: for they watch for your souls, as they that must give account, that they may do it with joy, and not with grief: for that is unprofitable for you” (Hebrews 13:17). pcg ministers watch over the brethren and are waiting to help us! In counseling sessions, they speak on God’s behalf, giving biblical advice specifically tailored to your situation. After praying and counseling about an issue, you will have the godly confidence necessary to firmly establish your purpose and go to war! (Proverbs 20:18).

Maybe some of your figurative open doors are barely cracked open. Maybe they weigh thousands of pounds, and have to be pushed all the way open. If a cracked-open door can’t be moved by your pinky alone, do you just walk away? I often have.

In moments like this, when confronted by the prospect of hard work and uncomfortable changes for the purpose of accomplishing a worthy goal, we desperately need to apply the sixth law of success: perseverance.

The late educator and theologian Herbert W. Armstrong discussed his extensive experience with the sixth law in his power-packed booklet The Seven Laws of Success:

Yes, nine in ten, at least once or twice in a lifetime, come to the place where they appear to be totally defeated! All is lost!—apparently, that is. They give up and quit, when just a little more determined hanging on, just a little more faith and perseverance—just a little more stick-to-it-iveness—would have turned apparent certain failure into glorious success.

Law number 6, then, is perseverance—stick-to-it-iveness!

I know! I have reached that point more than once! I, too, had everything swept out from under me in that flash depression of 1920.

I had been making an income, still in my 20s, equivalent to $350,000 or more per year on today’s dollar value. But some 90 percent of it came from five or six big Midwestern corporations. Most of these great corporations “went under”—that is, they went into “receivers’” hands.

Later, in 1926, an advertising business I had started on the West Coast was wiped out from under me by an association decision made in the east. A million-dollar project was dashed to oblivion by the stock-market crash and depression of 1929. But I did not quit or give up living. That was when my life goal was changed!

Even the first two years of the operation of Ambassador College stared constant defeat in the face. Nearly everybody thought we were through—we had failed! Why, they wondered, didn’t I realize it and quit? In those days I had to listen to associates around me talking constantly about “when this college folds up.”

But it didn’t fold up! By the year 1949 we got over our first financial hump. Later, the second. Today, I think I may be justified in saying that the college went on to glorious SUCCESS! And our operations today are worldwide on a major scale.

Like Mr. Armstrong, Mr. Flurry has applied the sixth law for a lifetime. Many milestones in God’s Work have resulted from perseverance. An obvious example is the pcg’s court case victory against the Worldwide Church of God. When the wcg tried to use the legal system in 1997 to prevent the pcg from printing Mr. Armstrong’s greatest book, Mystery of the Ages, Mr. Flurry countered by suing for 18 other written works by Mr. Armstrong! Not only did wcg interference fail to chase Mr. Flurry away from his goal of printing and freely distributing Mystery of the Ages, but it actually encouraged him to fight for an additional literature library of God’s truth! The door was almost closed, so God inspired Mr. Flurry to push it all the way open.

The pcg won Round 1 of the court struggle for Mystery of the Ages, lost Round 2, then was rejected by the Supreme Court. Despite the bad news, Mr. Flurry told Church members in a sermon that “it’s not over yet. We’re going to win this thing in the end. We absolutely know that” (Sept. 23, 2000).

Due to the counterclaim for the 18 additional written works, and to Mr. Flurry’s willingness to stay in court indefinitely to expose the wcg plot to suppress God’s truth, the wcg caved in and sold the copyrights to all 19 pieces of literature to the pcg. The two sides settled on Jan. 16, 2003—the 17-year anniversary of Mr. Armstrong’s death. (Read all about this spectacular, miraculous history in Raising the Ruins.)

What if Mr. Flurry had quit after any of the numerous setbacks during the court case? Where would God’s Work be today without being able to direct viewers, listeners and readers to Mr. Armstrong’s foundational works?

The Pinnacle of Perseverance

There’s a reason why Mr. Armstrong and Mr. Flurry set such remarkable examples of perseverance: They follow Christ, who, along with God the Father, is the pinnacle of perseverance!

Consider the history of the Godhead and some of the plethora of frustrations that could have caused them to quit. God created the angels, a third of whom rebelled (Revelation 12:7) and damaged the Earth and the universe (Romans 8:22), so God renewed the Earth and created mankind (Genesis 1-2) with the potential to finish the beautification process of the Earth and later the universe. The first man and woman rebelled, so God cut mankind off from access to His Holy Spirit (Genesis 3:22-24), with few exceptions. At the moment of Adam and Eve’s wrong choice to follow Satan instead of God, it was decided: One of the two God Beings would have to die to pay the eternal death penalty for the sins of all mankind (Romans 6:23; Revelation 13:8), making possible the resurrection from death to eternal spiritual life as members of God’s Family. At any moment during the next approximately 4,000 years, the Word, who later became Jesus Christ, could have bailed on that daunting and painful plan. God made ancient Israel His chosen nation, with the potential to be a shining light to the rest of the world. The carnal Israelites couldn’t obey God without the Holy Spirit, so God established His Church upon a Rock: Jesus Christ (Matthew 16:18). Of the seven Church eras (Revelation 2-3), all but two fell away from God.

Yet God and Christ are still here today, after millions of years of what we humans would think of as devastating setbacks, still pushing onward to their ultimate goal: establishing the Kingdom of God over the entire universe, with human beings transformed into God’s spirit-born sons and assisting in this never-ending project of teaching, ruling and building! Welcoming all mankind into the God Family has been worth all the pain, frustration, sadness and hardship they have endured!

In God’s Work and in your life, pushing doors open with God’s help is always worth the effort and sacrifice. The next time you find yourself standing in front of a barely open door, persevere. Push the door open.