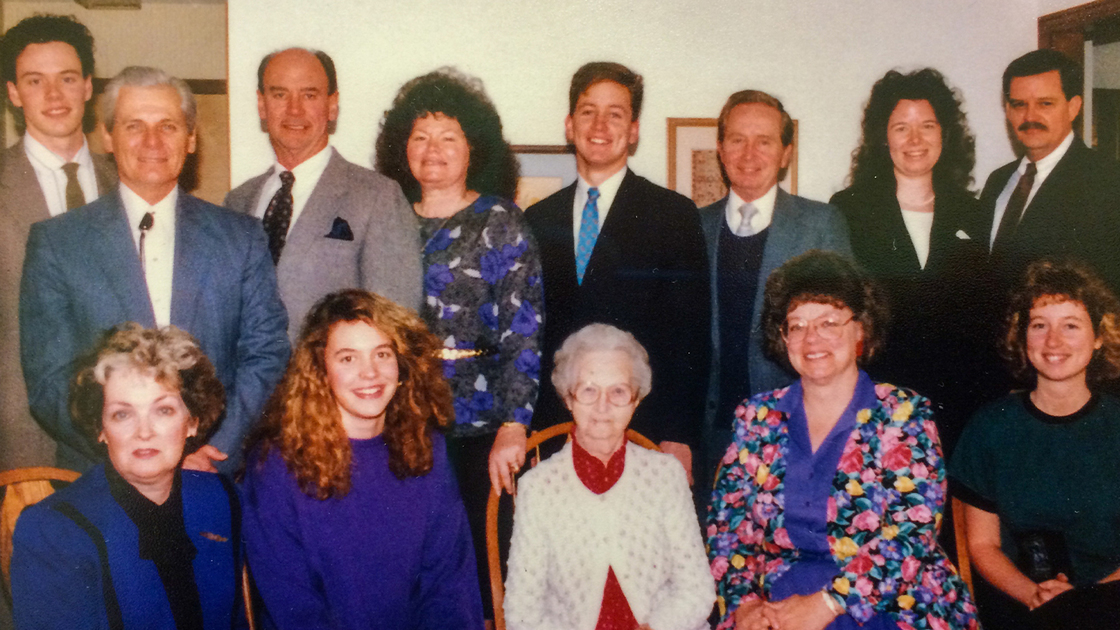 PCG
The original members of the Philadelphia Church of God

The Philadelphia Church of God just celebrated its 30th anniversary this month. Jesus Christ said, “[B]y their fruits shall ye know them.” We have been around for 30 years. That is plenty of time to show a lot of fruits. I want to ask you to evaluate the fruits of our Work—and whether it is of men, or whether it is something much more.

The beginning of our Work actually goes back much further than 30 years. It goes back to 1934 and another small beginning: one man and his wife. The work at this time had no resources to speak of. It was just one man’s efforts to study the Bible, submit to God and deliver a unique, Bible-based, authoritative message from God.

Herbert W. Armstrong sacrificed everything to preach this unique Bible message in rural western Oregon, first to a group of scattered Churchgoers, then to a radio audience of several hundred on a low-power local station and a couple hundred subscribers through a rudimentary bulletin, or magazine.

One day, as Mr. Armstrong was walking along a gravel road from one tiny congregation to the next, a man came up to him and told him, “You’re preaching the straight truth of the Bible. That offends people. … You won’t get far.”

Yet Mr. Armstrong continued preaching, addressing important Bible questions. Is the Bible God’s Word? Which weekly day should Christians keep? Should we observe the Bible’s annual holy days, and why? Can Christians divorce? What is baptism? Is evolution biblical? Does Satan exist? Why did Jesus Christ come? What was His message? Did He abolish the law? Does prophecy apply to the modern world? Why has Christianity lost its power? Why so many churches? What happens when we die? Mr. Armstrong asked these questions, and he answered them from the Bible.

The message itself expanded. New teachings from the Bible were added to the old, answering questions, deepening understanding and adding to the excitement. What is God like? What is the human mind? What is human nature? Why does marriage exist? Why does family exist? What is God’s form of government? Should Christians obey civil authority? Where did civilization originate? Where did America come from? What is ahead for America? What is ahead for mankind? How should I live my life? What is my purpose?

The teachings were authoritative and bold and straight out of the Bible. The message was unlike any other. It turned to Bible verses that were overlooked or avoided by other preachers and by Christianity in general.

Over the decades, the work that preached this message continued to grow! It added new magazines, a Bible correspondence course, a liberal arts college, a second college campus, then a third, a weekly television program, an auditorium, a concert series, a message. The Church spread around the world.

I became a member of this Church in 1961. Those of us who were part of the Worldwide Church of God under Mr. Armstrong understood that we were part of something great. In the 1980s, we were sending out 8 million copies of the Plain Truth in seven languages, we had enrolled 2 million Bible correspondence course students, and we were broadcasting on 382 television stations around the world. Millions of letters and telephone calls were coming in. Mr. Armstrong visited and built personal relationships with hundreds of leaders worldwide, including dozens of heads of state, heads of government, legislators and other leaders whom he shared his message with. The Ambassador International Cultural Foundation operated in countries around the globe, providing humanitarian aid, funding schools and educational programs, and supporting biblical archaeological discoveries in Jerusalem. It also sponsored a concert series at Church headquarters in Pasadena, California, in Ambassador Auditorium, hosting world-class performances by artists who were household names in America and beyond.

By the time Mr. Armstrong died in January 1986, Church membership was more than 130,000. Our children were part of fantastic youth programs. We were learning inspiring, life-changing truth about how to be fathers and mothers and sons and daughters, why those roles even exist, and what they are preparing us for. We watched the news and understood what we were seeing, and even what to expect based on Bible prophecy.

Under Mr. Armstrong, the Church of God practiced the way of give—of godly character, generosity, cultural enrichment, true education—of beautifying the environment and caring for fellow man. Mr. Armstrong never deviated from his God-given commission to preach the gospel, and the Work prospered! His work acknowledged God’s desire to have all men saved and brought to the knowledge of His truth (1 Timothy 2:3-6). It was an inspiring display of God’s love for all mankind.

Many of our readers still remember what life was like in the Church under Mr. Armstrong. If you were applying the Bible and family-based teachings, you personally experienced something life-changing in that Church.

Now, did Mr. Armstrong do all that? He certainly worked hard and dedicated his life to that Work. But was the Worldwide Church of God in the 1980s a product of his intellect or speaking style?

No—the great God did that!

It doesn’t take great spiritual discernment to recognize that God was behind that Work, God was blessing it, empowering and multiplying it. Mr. Armstrong was the man He had called to lead it, and because he submitted to Him, God miraculously made it happen!

No man could have ever built such a marvelous and wondrous work in this satanic world. It was built and sustained by the miracles of the living God!

What distinguished Mr. Armstrong’s accomplishments was that they were all built on the foundation of God’s truth. God flooded Mr. Armstrong with biblical understanding, restoring all foundational true doctrine to His Church through that man (Matthew 17:10-11). We learned and lived by the wonderful truths of God, and our lives were richer as a result.

That Church was a work of miracles.

But on Jan. 16, 1986, Mr. Armstrong died. And what happened to the Church after that was as astonishing as its rise. The leaders who succeeded him closed down programs, canceled and even destroyed literature, intimidated and excommunicated members. Why? Because they were changing the teachings. They rejected what Mr. Armstrong taught and promoted “new” doctrines, literature, programs, plans and ideas—which were similar or identical to the unbiblical mainstream Christianity that many Church members had left.

The results were disastrous. Soon, Church projects were closing, income was dropping, and membership was declining. But far worse were the spiritual fruits. The precious truths God had restored through Mr. Armstrong, recorded in books and other literature, were being diminished, disparaged and attacked. Many important books stopped being printed and distributed. The faith of thousands of people was being destroyed! The Church was dying!

But did the source of the power behind Mr. Armstrong die? Did God die? Absolutely not.

Where is the great Almighty God who was behind the powerful work of Herbert Armstrong—today?

Thirty years ago, in an office in Pasadena, the wcg leaders who replaced Mr. Armstrong fired me and my assistant for holding fast to the message Mr. Armstrong taught. They knew better than him. They said his teachings were “riddled with error” and that he was a terrible leader. They planned to take the organization God had built through him in a new direction. Suddenly I was a fired minister with no congregation, no salary or anything else—except those Bible truths that I believed with all my being.

Now, 30 years later, what are the fruits? Which counsel or work is of men? You can tell a lot by judging the fruits.

The Worldwide Church of God continued to decline, fracture, splinter and further decline. It closed down all of its major projects, sold off its assets, completely rejected everything Mr. Armstrong taught. It even changed its name.

The Philadelphia Church of God has far fewer people than the Worldwide Church of God had when Mr. Armstrong died in 1986. But I encourage you to examine the miraculous work God is doing with this few!

The pcg produces the Trumpet, with a circulation of more than 240,000; the Key of David television program, which broadcasts to a potential audience of over 400 million worldwide; theTrumpet.com, which receives more than 2.5 million visitors a year; Royal Vision Christian-living magazine; Watch Jerusalem magazine; True Education youth magazine; and an updated version of Mr. Armstrong’s Bible correspondence course with more than 100,000 enrollees. We have conducted more than 50 Personal Appearance Campaigns like those Mr. Armstrong held; we have regional offices in Australia, Canada, England and the Philippines; we have a 170-acre headquarters campus in Edmond, Oklahoma, which includes the majestic Armstrong Auditorium, where we host world-class concerts.

We have a cultural foundation sponsoring concerts in the auditorium and biblical archaeology in Jerusalem. We have even exhibited some of the most biblically important artifacts ever found: clay seals that once belonged to princes who persecuted the Prophet Jeremiah, and that once belonged to King Hezekiah and the Prophet Isaiah. Since 2001, our college, Herbert W. Armstrong College, has graduated over 280 students, of whom over 80 have been employed full-time or part-time in the work. We have a 22-acre campus just north of Stratford-Upon-Avon, England, and a corporate jet that expedites our growing work.

But most importantly, we have the truth of God! Our understanding and message is what really makes us unique—not the material possessions we have (which other churches have more than us). We have the same truth God gave Mr. Armstrong, and, just as with him, that truth has grown, deepened, widened, multiplied. God has continued to bless us, as He did Mr. Armstrong, with new revelation. The living God did not stop speaking to His people when Mr. Armstrong died. He continued to give His people “present truth” (2 Peter 1:12) that builds on the foundation of the truth He restored through Mr. Armstrong. The pcg produces over 100 books and booklets, the majority of which contain new biblical understanding from the great God.

Our possession of God’s truth is the single greatest proof that the God who inspired Mr. Armstrong is behind this Work! This message is what most excites our people and many of our readers.

We hope you can clearly identify the same miracles and blessings that built Mr. Armstrong’s work.

Our time in this age of man is fast running out. God is growing much more urgent in trying to reach His sons who have turned away from Him, because eternal life hangs in the balance. We urge you to respond to Him!

If you recognize something unique and powerful in what you have read from us, then look more deeply into the Philadelphia Church of God work. There is so much for you to learn about and benefit from—an entire way of life and an awesome future ahead. It is available to you—if you will not only read, but make a decision: Is this the work of men, or is this the Work of God?

To learn more about the Philadelphia Church of God, request your free copy of Raising the Ruins.