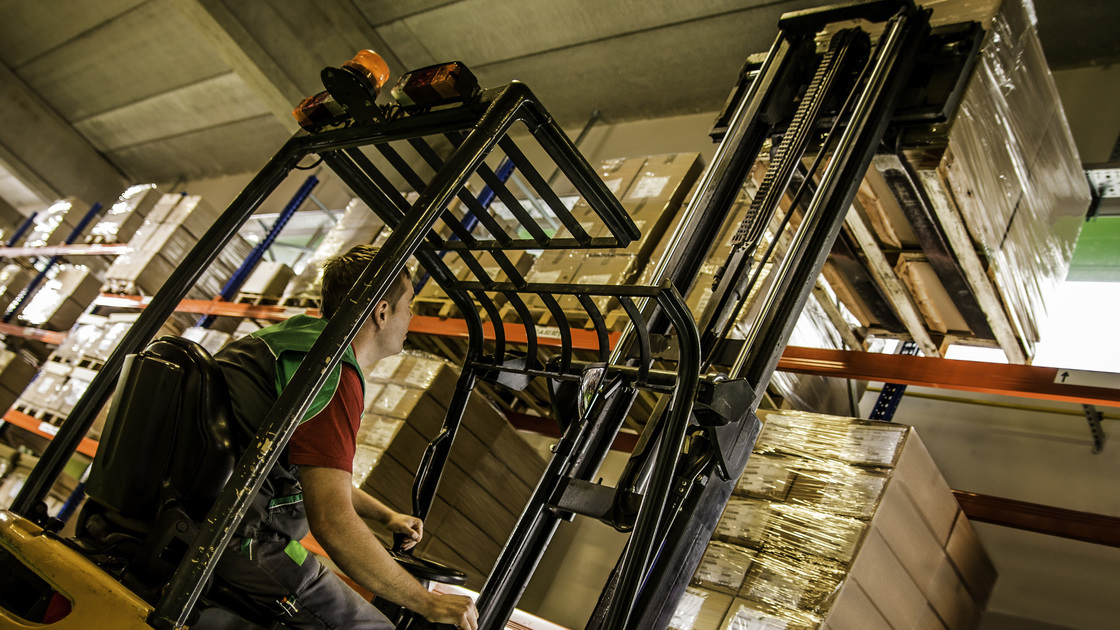 I used to be a forklift operator for a large appliance warehouse, and I absolutely loved my job. One day, I entered the forklift bay and located my favorite forklift. Everyone at the warehouse affectionately called her Eeyore because she was the oldest, slowest, but most reliable forklift in the whole fleet. After making sure she was in top working condition, I jumped on, and with Eeyore’s blistering top speed of 9.5 miles per hour, I entered the main warehouse.

I was greeted by row after row of fridges, stoves and other large appliances stacked four to six high. The boxes were arranged like toy wooden blocks and set into long rows.

You might be asking: how can you stack appliances like that with a forklift? The answer is that you can’t. Our forklifts didn’t actually have “forks.” They were equipped with giant metal clamps that could grab boxes by clamping the sides. This allowed us to move, stack, and retrieve appliances quickly and with little effort.

My section of the warehouse was unique. Instead of the stacks of appliances, I was responsible for “the racking.” These were 15-foot-high, three-tiered metal shelves that lined the south and west walls of the warehouse. This was where we stored anything smaller than a dishwasher.

As I careened around the corner, I was already thinking about the list of appliances I needed to get for the day’s delivery run. It was an abnormally large run, and I was not going to have time to dawdle. After checking my list, I decided to start with the hood fans.

I slowly went by, scanning the shelves for the model of hood fan I needed. Nope, not that one. Or that one. Still not it. There! Top shelf and on a pallet with three other hood fans.

I turned Eeyore to face the rack. Grabbing the first control stick, I sent the clamps up to the top shelf. With routine ease, I then grabbed the third control stick and opened up the clamps. I drove forward and grabbed hold of the pallet. Lifting it off the shelf, I backed up just far enough so I could bring the hood fans down.

This is when everything went wrong.

Without paying attention, I had grabbed the wrong control stick and pushed it forward. Instead of bringing the pallet safely to the ground, I had instead opened up the clamps, releasing the pallet.

Right after I had done this, all my practiced muscle memory screamed at me. I had done this a thousand times, and I immediately knew that I had made a big mistake. My eyes shot upward just in time for me to watch with abject horror as the pallet began its 15-foot drop. As it fell, I could feel my stomach plummet into my steel-toed boots.

Shards of wood and Styrofoam skittered across the floor. Shocked and feeling absolutely nauseous, I reversed Eeyore and parked out of the way. Getting out of my seat, I found my legs trembling. I walked over to the pile of splinters and stared at the four hood fans. A sliver of hope emerged: the packaging didn’t look that bad. Maybe they were alright! I pulled out my pocket knife and cut the tape on top.

My heart fell for the second time. The appliances were severely damaged.

Surely this was it. I was as good as fired. What was I to do? Immediately, excuses, possible lies and ways to hide what I had done began to flash through my mind like flashes from a camera.

I immediately rejected trying to cover up what I had done and began to walk over to my boss’s office. What would I tell him? What could I say to save my job? As I entered his office, I came to a decision: I needed to take full responsibility—no excuses—even if it meant losing my job.

With a stone in my stomach that weighed a ton, and a knot in my throat the size of Texas, I told him what happened.

“Let’s go take a look then,” he sighed. He was clearly not happy. As we walked back to the disaster, I could only pray and ask God for help.

After he had surveyed the carnage, he told me what I needed to do. After the cleanup, he informed me that I would be suspended from the forklift for a few days.

I was stunned. He didn’t fire me!

Several days later, I was granted permission to get back on the forklift. Not only was I allowed back on the forklift, I was also given a new opportunity. My boss had me trained on how to move and store our most expensive item: built-in refrigerators. Each of these monsters came with a price tag upward of $10,000. As time went on, my boss gave me even more responsibilities.

Why hadn’t my boss fired me?

I could have covered it up. No one would have known what had happened except me, right? But God knew what happened. Instead of covering it up, I took responsibility. What I had originally thought would be the end of my job instead became the impetus God used to give me greater responsibilities at work. My boss gave me even more responsibilities, which included some leadership opportunities, because my actions showed him that he could trust me.

We all make mistakes, but God expects us to take responsibility when we mess up. He sees and rewards our honesty when we hold ourselves accountable for our mistakes. This is a lesson I had to learn the hard way, but it was a lesson worth a forklift’s weight in gold.