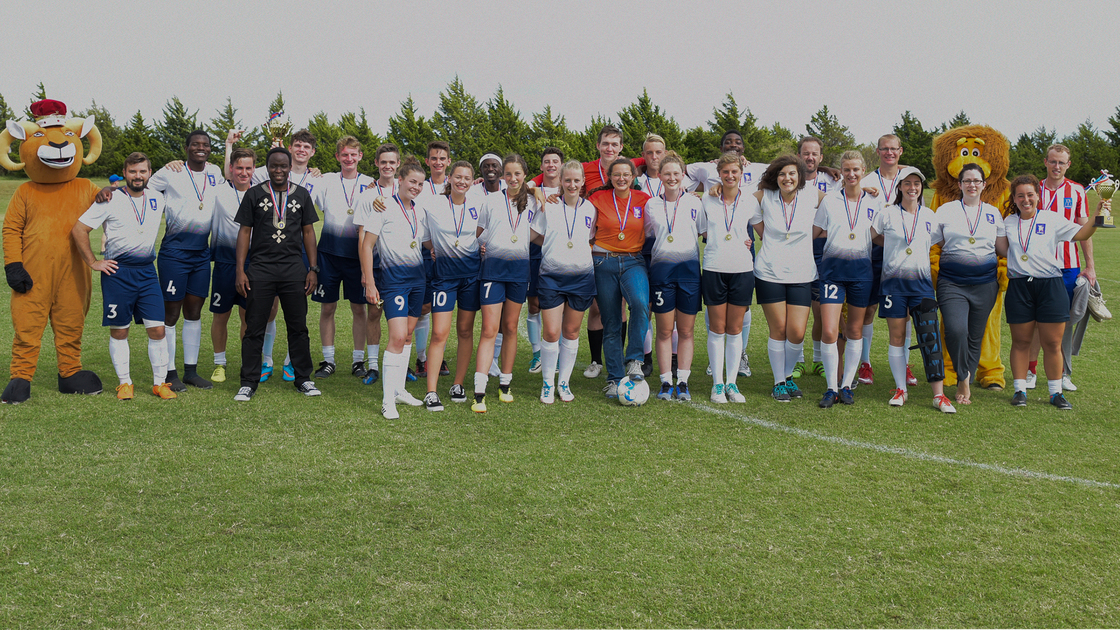 EDMOND—Despite forecasts for an 80 percent chance of rain, about 250 Philadelphia Church of God members and youth came to the Herbert W. Armstrong College soccer field on September 22 for the tenth Joseph’s Cup, and they were not disappointed.

The tradition has grown from a simple game to now include lunch, mascots, halftime activities, 56 players, dozens of staffing volunteers, and more than 100 spectators.

“Organizationally, it was a genuine team effort from the college administration all the way through to the 50 people who staffed the event,” said Preaching Elder Gareth Fraser, who supervised this year’s event. “God’s government works so wonderfully when we all submit to it and fulfill our role within the overall hierarchy.

This year’s event began with a prayer and the English anthem “Jerusalem” and “The Star-Spangled Banner,” then a women’s match. Team Manasseh kept pressing the attack throughout the first half, but was unable to put the ball in the net. Prior to the half, Team Ephraim’s Mikayla Klusenberg booted the ball from midfield, and it unexpectedly bounded over Team Manasseh goalie Amber Eagle to put Ephraim up 1-0. During the halftime break, college mascot Rory the Lion and Imperial Academy Mascot Roy L. Ram provided entertainment, giving hugs to children and playing goalie as the youngsters took shots on goal. In the second half, both teams pressed for an advantage and had near misses, but neither could get the ball past the opposing goalie, and Ephraim earned the victory.

In the men’s game, Team Manasseh dominated the first half. College student Victor Granados scored first on a free kick, student Jordan Saranga scored on an assist by graduate Adiel Granados, and graduate Sam Livingston scored, also assisted by Adiel Granados. Team Ephraim was held scoreless. After the half, Ephraim scored on a penalty kick from English college student Harvey Powell, then on a goal by Dutch student Ruben Staal, assisted by graduate and Zimbabwe native Anthony Chibarirwe. With five minutes left in regulation, graduate Gavin Fraser’s corner kick sailed past the defense into the goal, enthusing the crowd and tying the game. An extra 10 minutes was added to the 90 minutes of regulation. With only two and a half minutes left in overtime, Gavin Fraser booted another corner kick, which Zimbabwean student Kumbirai Matemadombo headed into the net for the winning goal for Team Ephraim. Most valuable player awards went to Mikayla Klusenberg and to Seth Malone. The series is now tied at five games apiece.