Man Is to Become Greater Than the Angels
God’s angels have lived for millions of years with stunning power and without sin. How could mortal men exceed them?
By Gerald Flurry • Sep. 13, 2019 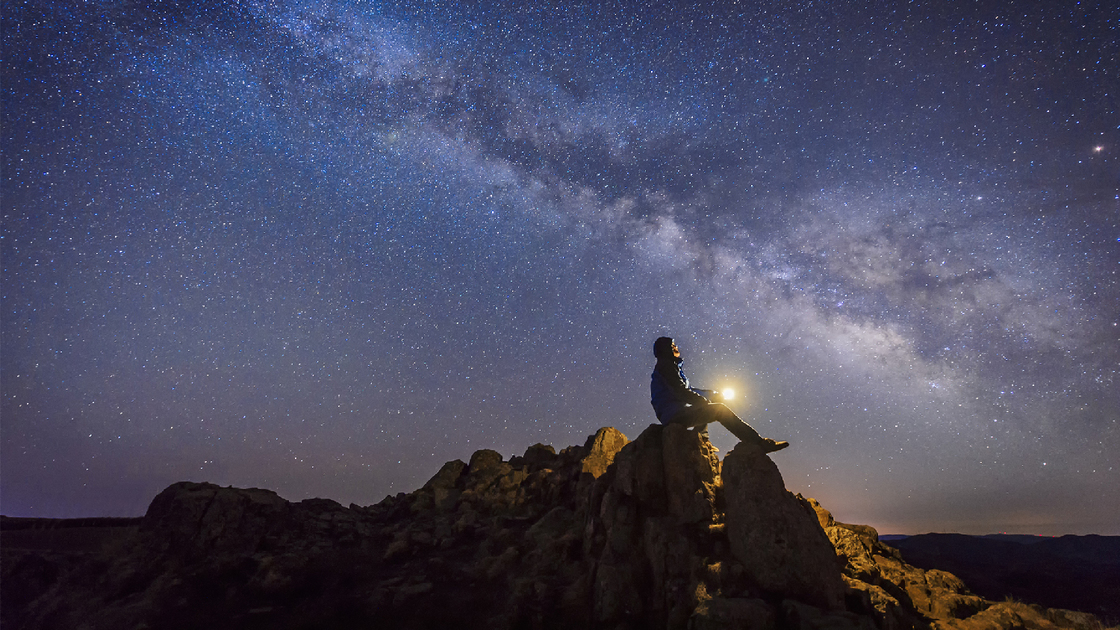 God describes the angels in brilliant detail throughout the Bible. They are as burning coals encompassed by a bright fire, shooting forth lightning. Their faces are bright like the sun. Their feet are pillars of fire. They are a righteous army under God their General, riding on horses and chariots of fire. The angels are full of fiery majesty.

You are destined to become greater than the angels, with better character, a deeper mind and more transcendent power. So says your Bible.

The angels may be remarkable, but they are staggered and stirred by God’s plan for man. “Unto whom it was revealed, that not unto themselves, but unto us they did minister the things, which are now reported unto you by them that have preached the gospel unto you with the Holy [Spirit] sent down from heaven; which things the angels desire to look into” (1 Peter 1:12). The angels are mesmerized, in awe, of man’s potential.

To grasp your potential, it is important to understand just how awesome the angels are. “As for the likeness of the living creatures, their appearance was like burning coals of fire, and like the appearance of lamps: it went up and down among the living creatures; and the fire was bright, and out of the fire went forth lightning” (Ezekiel 1:13). The angels dart from place to place like lightning. They radiate overwhelming fire. Yet they marvel at your future!

“And I saw another mighty angel come down from heaven, clothed with a cloud: and a rainbow was upon his head, and his face was as it were the sun, and his feet as pillars of fire” (Revelation 10:1). It is hard to even picture a being with such power and glory!

“And he had in his hand a little book open: and he set his right foot upon the sea, and his left foot on the earth” (verse 2). The angel in this vision standing on the sea and on the land had a message from God for the whole world. God trusts the angels to deliver His message.

“And cried with a loud voice, as when a lion roareth: and when he had cried, seven thunders uttered their voices” (verse 3). Angels exude resounding, thunderouspower. How could you possibly become greater than these majestic beings? Do you really believe God when He reveals your future?

In his writings, the Apostle Paul made it a point to compare the power of the angels to the potential of man. “For to what angel did God ever say, ‘Thou art my son, to-day have I become thy father’? Or again, ‘I will be a father to him, and he shall be a son to me’?” (Hebrews 1:5; Moffatt). God seeks a family relationship with mortal human beings! He is re-creating Himself in you. You can pray to Him as your Father every day, as much as you desire. The angels can never pray to God as a Father. They are God’s sons in the sense that He created them, but they are not literally sons of God like Jesus Christ is—or like you and I can become.

Lesson 18 of our Herbert W. Armstrong College Bible Correspondence Course reads: “Man, now lower than angels, has a destiny far higher! Neither animal, nor angel, nor any other being except man, was created to be literally begotten by the spiritual reproductive process and then actually be born into the divine GOD FAMILY! Angels were not, and never can be, begotten and born of God! No angel can ever become a literal member of thedivine Family of God!”

“To what angel did he ever say, ‘Sit at my right hand, till I make your enemies a foot-stool for your feet’?” (verse 13; Moffatt). God’s loyal people today, the firstfruits, are preparing to rule the stars from Christ’s throne forever. God can trust only Himself with the universe, so He is reproducing Himself in us! He has never offered the angels co-rulership over the entire universe as the Bride of Jesus Christ (Revelation 19:7). He will never offer such a reward to them.

The loyal servants who obey God before Christ returns will not only become God’s sons, they will be honored to become Christ’s Bride. The overwhelming majority of human beings, who are converted after Christ returns, will also become God’s sons. That potential is still greater than what the angels have. We human beings come from the dust of the Earth, yet God wants to give us everything!

“Are they not all ministering spirits, sent forth to minister for them who shall be heirs of salvation?” (Hebrews 1:14). The angels are destined to serve you. That is their potential.

“For unto the angels hath he not put in subjection the world to come, whereof we speak” (Hebrews 2:5). The angels are not called to rule the world. You are!

A Little While Lower

“But one in a certain place testified, saying, What is man, that thou art mindful of him? or the son of man, that thou visitest him? Thou madest him a little [while] lower than the angels; thou crownedst him with glory and honour, and didst set him over the works of thy hands: Thou hast put all things in subjection under his feet. For in that he put all in subjection under him, he left nothing that is not put under him. But now we see not yet all things put under him” (Hebrews 2:6-8). Until God transforms us into spirit beings, we are far less brilliant and powerful than the angels. But it won’t stay that way. The way God sees it, His sons rule the universe already! That is man’s potential.

God tells us to be careful to respect the angels since they are “greater in power and might” at this time. “But chiefly them that walk after the flesh in the lust of uncleanness, and despise government. Presumptuous are they, selfwilled, they are not afraid to speak evil of dignities. Whereas angels, which are greater in power and might, bring not railing accusation against them before the Lord” (2 Peter 2:10-11). Only rebels speak poorly of God’s angels.

Very soon, mortal humans will receive the power of the angels—and much more! “And God said, Let us make man in our image, after our likeness …” (Genesis 1:26). God created human beings in His likeness, meaning that we resemble Him in our appearance. Much more importantly, God created us in His image, with the ability to develop His very mind and character. One day, you can possess the perfect mind and character of God. You will not only look like your Father, you will also think and act like Him! That is power—exceedingly above the angels!

Even Jesus Christ was once a little while lower than the angels. “But we see Jesus, who was made a little lower than the angels for the suffering of death, crowned with glory and honour; that he by the grace of God should taste death for every man. For it became him, for whom are all things, and by whom are all things, in bringing many sons unto glory, to make the captain of their salvation perfect through sufferings” (Hebrews 2:9-10). The Captain of our salvation subjected Himself to that situation to bring the sons of God to glory! Think deeply about God’s plan for man. How can we neglect so great a salvation? (verse 3).

“For both he that sanctifieth and they who are sanctified are all of one: for which cause he is not ashamed to call them brethren” (verse 11). Jesus Christ happily calls us His Family. We are all brothers and sisters, sons of God. Christ is our elder brother; through His sacrifice, He enabled the rest of us to be born as spirit beings into the God Family one day. He was the eternal Word who lived for eternity serving as the Spokesman for God the Father. While He walked the Earth as a flesh-and-blood man, He declared the Father (John 1:18). The gospel message is all about family!

How the Angels Failed

Before God created man, the angels had the opportunity to rule the Earth. If they had succeeded, they would have ruled the universe. In his book Mystery of the Ages, Herbert W. Armstrong wrote: “So the angel potential was to take over the entire universe—to improve and finish the billions of physical planets surrounding the uncountable stars, many of which are suns. … God started this Lucifer out with everything going for him. He sealed up the sum of wisdom, beauty and perfection. He was perfect in all his ways from the instant he was created until iniquity—rebellion, lawlessness—was found in him (Ezekiel 28:15).”

Mr. Armstrong compared the universe to unfinished furniture. God created the universe without a single flaw. The angels would apply the finishing touches, making it habitable and beautiful the way they had done it on Earth. But the archangel Lucifer became selfish and evil and led astray one third of all the angels. He brought destruction and ugliness to Earth and to the universe beyond.

This proved to God that only beings with His mind and character could be trusted with such a massive responsibility. The angels were Plan A. Plan B was the ultimate, high-stakes backup plan: mankind!

God can create nothing greater than perfect sons who develop His character through trials and tests during this physical life. Christ said in Matthew 5:48, “[Become] ye therefore perfect, even as your Father which is in heaven is perfect.” The key to the whole plan is godly character. We must submit to God building His character in us, or we will fail just like one third of the angels did.

Lucifer became the perverted archdemon Satan. He still has a lot of power. In fact, he still rules the Earth. The Bible calls him the god of this world (2 Corinthians 4:4; Revelation 12:9). The whole world is enslaved under his tyrannical rule! As a result, this world has been a horrid place ever since the first man and woman began to follow Satan, and generation after generation, their descendants have made the same choice to reject God, rely on themselves, and be influenced by Satan. After thousands of years of this debacle, we are now plunging into the worst violence and destruction in human history (Matthew 24:21-22).

But although Satan has enormous power, you have access to far more power—if you obey God. This is a lesson that a man of God taught to his servant in 2 Kings 6:15-17: “And when the servant of the man of God was risen early, and gone forth, behold, an host compassed the city both with horses and chariots. And his servant said unto him, Alas, my master! how shall we do? And he answered, Fear not: for they that be with us are more than they that be with them. And Elisha prayed, and said, Lord, I pray thee, open his eyes, that he may see. And the Lord opened the eyes of the young man; and he saw: and, behold, the mountain was full of horses and chariots of fire round about Elisha.”

As you fight to submit to God and use His power to conquer the devil, this great angelic army of God is on your side! These fiery warriors protect God’s people. And this is just the beginning of a relationship that will last for eternity after we are born as God beings and the angels continue to assist us.

Just like the young man in this passage, pray that God will open your eyes to see the marvelous power that is backing you each day. Ask for the faith to believe in your potential—a potential that is greater than the angels.