‘A Little Child Shall Lead Them’
The Prophet Isaiah gives a vision of our young people’s future.
By Joel Hilliker • Sep. 17, 2019 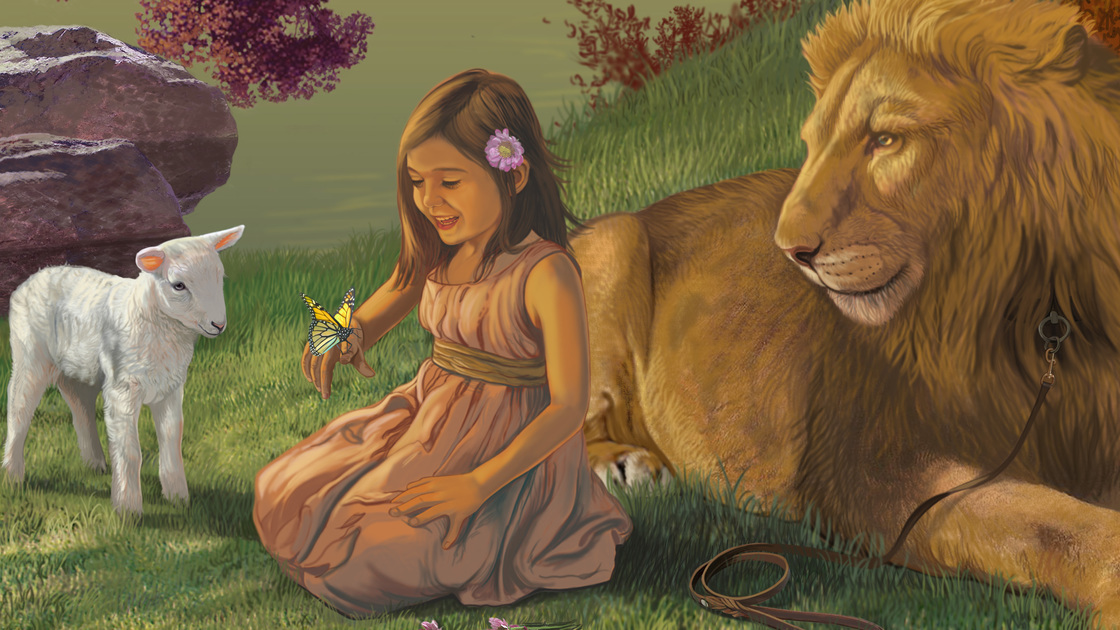 Young people, do you know what you’ll be doing during the Millennium? God has some exciting plans for you!

Look at this picture written about by the Prophet Isaiah: “The wolf also shall dwell with the lamb, and the leopard shall lie down with the kid; and the calf and the young lion and the fatling together …” (Isaiah 11:6).

In the World Tomorrow, wild animals will be calm. Farm animals won’t be afraid. Wolves will live alongside little lambs, and leopards will lie down right beside young goats. Baby cows and lion cubs will play together.

Did you know that, when the animals are like this in the World Tomorrow, it won’t be the first time? In the Garden of Eden, all the animals were friendly! Adam and Eve could rub a lion behind the ears or climb up the back of a big rhinoceros. Everything was wonderful and peaceful—as long as they obeyed God.

When Adam and Eve rebelled, however, something happened. The Bible says God cursed the Earth (Genesis 3:17-19). Even the animals became fierce and hostile toward people and each other. The whole world became a dangerous place to live.

That’s what happens when we disobey God!

Look at the way animals in the wild interact today: They hunt, attack and eat each other. But when Jesus Christ returns to this Earth, He’s going to change things back to the way they were in the Garden of Eden!

What a beautiful picture! It shows that the wild and dangerous elements of our world today are about to be changed. It shows that those that are enemies today will live peacefully together.

And that is true not just of animals—but also of people! The wild animal becoming tame is actually a symbol of the wild people in this world becoming tame! In God’s world, people won’t fight each other—they will get along just like those animals!

You know how easy it is to get into a fight with your brother or sister today. In tomorrow’s world, that won’t happen. In fact, if you find yourself getting into an argument, think about that picture of a lion and a lamb getting along. Remember: That’s how it will be in the World Tomorrow—and that’s how God wants you to live even today.

But here’s the most amazing part. Right there within Isaiah’s prophecy, it talks about our young people: “… and a little child shall lead them” (Isaiah 11:6). All the animals will be tame—and God will have our children teaching, training and leading them!

What will you teach a wolf or a leopard? Roll over—shake hands—catch a Frisbee—climb a ladder? Maybe you could keep a lion in your backyard and use him as a wrestling partner. Imagine playing fetch with a cheetah. A cheetah can accelerate to almost 70 miles an hour in three seconds—faster than most supercars! You could shoot a stick from a cannon, and he could probably run and catch it in midair!

It’s worth thinking about these things because God says you are going to lead these animals. He wants to help you learn how to lead by having you lead animals.

When Herbert W. Armstrong wanted to find a symbol for God’s Church—something that represented everything we are about—this is the image he chose: a big majestic lion, and a little lamb, being led by a little child. That was the seal of the Worldwide Church of God.

God says His Kingdom is made up of people who become as little children (Matthew 18:3-4). Did you know that God expects the adults in His Church to become like little children, so we can lead in the Kingdom of God? That is what the World Tomorrow will be composed of: spirit beings with childlike attitudes who obey God and lead the world!

Read the rest of the passage in Isaiah about cows and bears eating together, and about God removing the poison from snakes so you can play with them. In Hosea 2:18, God says He will make a contract with the animals. All the birds, bugs and beasts will have to “sign on the dotted line” and say: I will not hurt people. There is even a prophecy that says you will be able to go camping in the woods without having to worry about wild animals: Ezekiel 34:25.

God loves you—and He wants to make the World Tomorrow a special place just for you! He’s planning a world full of excitement and adventure for you—a world you will love to live in!

And the really great thing is, that world is almost here!