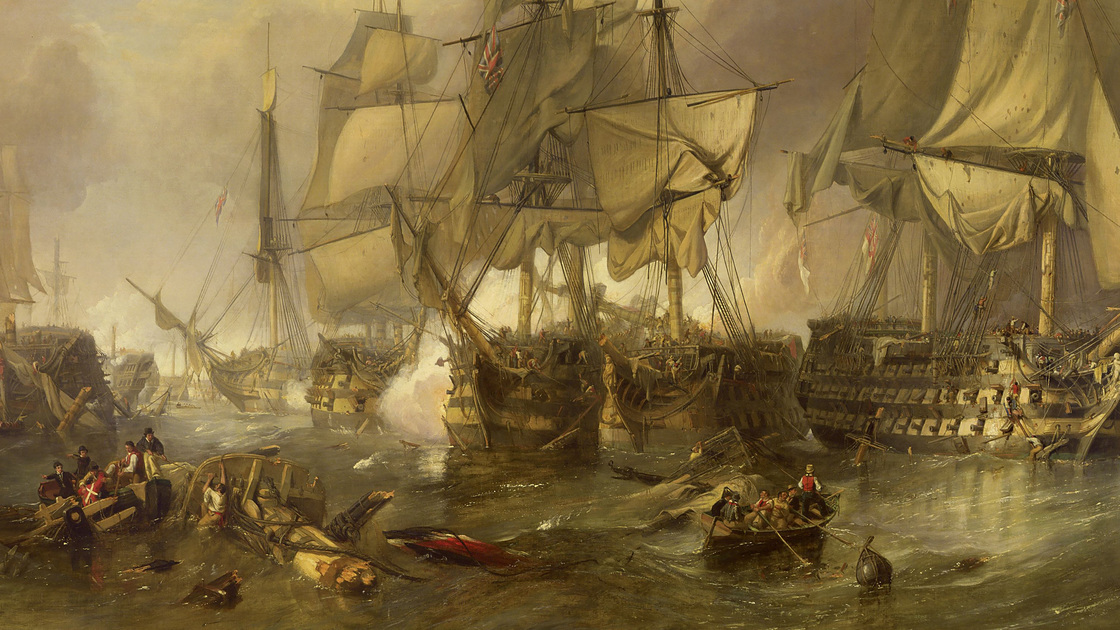 Hours before the battle that would end his life, Adm. Lord Horatio Nelson sat at his desk on the flagship HMS Victory and wrote this prayer in his diary: “May the great God, whom I worship, grant to my country, and for the benefit of Europe in general, a great and glorious victory; … I commit my life to Him who made me; and may his blessing light upon my endeavors for serving my country faithfully. … Amen.”

It was 1805, and Napoleon had just crowned himself emperor of Europe. After a whirlwind takeover of the Continent, he set his sights on the next prize: Britain. Britain’s navy was the world’s best, and Napoleon knew he had no chance of defeating Britain’s fleet unless he allied with Spain.

Horatio Nelson—Admiral of the British Navy—had the job of stopping this combined Franco-Spanish fleet. He prepared intensively for this battle. The British were outnumbered. Against the combined Franco-Spanish fleet of 33 ships, Britain only had 27. But rather than being discouraged, Nelson was motivated to prepare even more. He focused on trusting the abilities of his men and bolstering their morale. The Franco-Spanish fleet had more numbers, but it lacked leadership and skill. Many of the best French officers had either been executed during the French Revolution or had left their positions, and the young men in the fleet had scant training.

Before the battle, Nelson invited his captains to dine aboard HMS Victory where he outlined his unconventional plan. Usually in naval battles, ships would line up in a single column, facing the enemy. This way, each ship would be able to see the flagship, which relayed messages to the rest of the fleet during battle. Instead of this head-on attack, Nelson made an unprecedented choice: He decided to split his fleet into two columns, which would enable them to attack the French-Spanish fleet at right angles, cutting the enemy’s line into thirds. That way, the British fleet could easily surround the core of the enemy’s ships, assuring an easy victory.

On the day of the battle—Oct. 21, 1805—Nelson ordered a series of flags to be raised on his flagship Victory that signaled: “England expects that every man will do his duty.” His men cheered as they raised the signal and the message spread throughout the fleet. As the two columns of ships sailed toward the enemy, the British endured heavy fire without being able to fire back. Fifty men aboard Victory were killed or wounded before the ship was able to open fire. As the other ships of the fleet joined the melee, Victory fired a fatal shot against the French flagship, leaving the fleet without the leadership it needed to defeat the British.

Victory then exchanged fire with the French ship Redoubtable, and their rigging became entangled. As the ships exchanged cannon fire, a French sniper spotted Nelson on the deck of Victory, who was unmistakable in his decorated military coat. The sniper’s musket ball struck Nelson’s lung and lodged in his back. He was taken belowdecks. By then, he knew that Britain had won the battle. His last words were: “Thank God I have done my duty.” He died within a few hours.

At the end of the battle, after five hours of fighting, there were only 1,500 British casualties, and every British ship was intact. The Franco-Spanish fleet had approximately 6,000 casualties and lost 19 ships, plus 20,000 captured men. It wasn’t just a success for Britain—it was an outstanding victory. Napoleon was prevented from invading Britain, and he turned his ambitions eastward on Russia.

In a recent Trumpet Daily Radio Show, host Stephen Flurry noted that this battle occurred right around the time God was pouring out His blessings on the biblical descendants of Ephraim. This victory guaranteed that Britain would control the oceans. It ensured that Britain would continue to expand and prosper as a world superpower. This battle would not have been won without a leader who was deeply devoted to his country.

One outstanding character trait shaped Nelson’s perspective of battle: his sense of obligation. This wasn’t something he worked up overnight. Nelson’s character was shaped through years of experience.

In a previous battle, his right elbow was hit by a musket ball, and his arm had to be amputated. In yet another battle, he had been blinded in one eye. But his afflictions didn’t prevent him from doing his duty. His ability to endure hardness inspired others to march forward, dedicating themselves to their country.

Nelson had passion for his responsibility, which inspired his men to do the same! Napoleon—the very enemy Nelson fought against—once said that a leader is a dealer in hope. How many more British casualties would there have been if Nelson hadn’t been on the deck of Victory, inspiring his men to move forward and face the enemy—to do their duty?

Nelson’s leadership during the Battle of Trafalgar provides plenty of lessons: We can be inspired by how he prepared tremendously, how he bolstered the morale of his men, and how he led by example by staying in the middle of the fight. But one overarching principle drove all of Nelson’s actions: a sense of duty, which was his devotion to defending the British people.

How much more do we need to do our duty—to dedicate ourselves to the spiritual war we’re in? We fight for a more important cause and for a better country. But it starts in the smallest of ways. It starts with what we do with the responsibility God has given to us. God expects each of us to do our duty!

In London, a monument of Horatio Nelson stands in Trafalgar Square, named after the successful battle he led. It serves as a reminder that duty involves sacrifice—putting the needs of others above ourselves.

In the prayer he wrote hours before he died, Nelson didn’t mourn that he might lose his life. He knew he might die, yet he was entirely focused on protecting his country. This is the same attitude that we must have in the spiritual battle we are in. If we look to God, He will give us the victory.