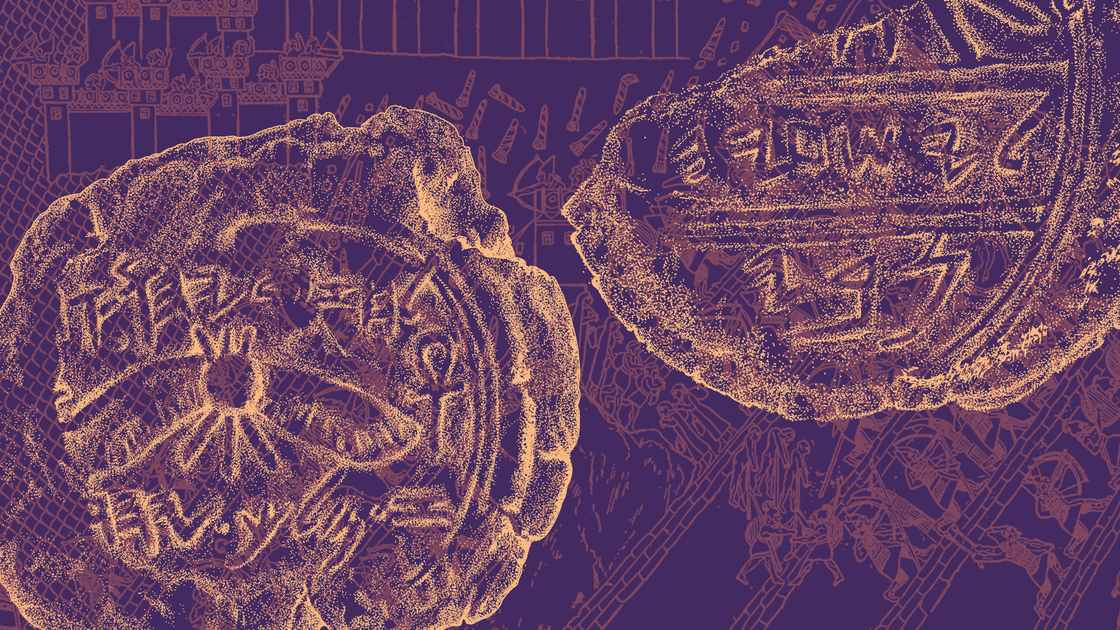 There are literally hundreds of archaeological discoveries that corroborate Bible history. It has confirmed the historical accuracy of the Bible. Solid, documented evidence apart from the Bible confirms events and people who were known to us only from Scripture at one time, and even seemingly insignificant examples help to prove that the Bible is God’s Word.

For example, Genesis 41:14 says, “Then Pharaoh sent and called Joseph, and they brought him hastily out of the dungeon: and he shaved himself, and changed his raiment, and came in unto Pharaoh.”

Many critics ridiculed the assertion that Joseph shaved himself before going before Pharaoh. Society at that time was too primitive, they insisted, for people to have shaving implements. They insisted this until solid gold and copper razors were found in Egyptian tombs dating back to the fourth millennium b.c.—many centuries before Joseph!

The Behistun Inscription is an account of Darius the Great’s assumption of the Persian throne. It was written in cuneiform in three languages. Once that was deciphered, it enabled other cuneiform writings to be translated: thousands of tablets found at Nineveh, Shalmaneser’s Black Obelisk and Sennacherib’s Prism—also known as the Taylor Prism—for example. Each of these artifacts confirms biblical personalities or events.

At one time, there was no record of the kings of ancient Israel and Judah during the period of the divided monarchy, apart from the biblical record. Critics did not believe those kings lived—until over 30,000 clay tablets were excavated in Nineveh from the library of Ashurbanipal, an Assyrian king. Among these tablets were a few that mentioned biblical kings by name.

Some critics even doubted that Babylon actually took Judah captive because there was no evidence other than the biblical account in 2 Kings 24-25—until they found the Lachish Letters, which were written during the time of the Babylonian siege.

More recently, in 2005, when workers were repairing a sewage pipe in the area that was anciently the City of David, they uncovered the Pool of Siloam mentioned in John 9. Here’s what the Los Angeles Times reported: “‘Scholars have said that there wasn’t a Pool of Siloam and that John was using a religious conceit’ to illustrate a point, said New Testament scholar James H. Charlesworth of the Princeton Theological Seminary. ‘Now we have found the Pool of Siloam … exactly where John said it was.’ A [G]ospel that was thought to be ‘pure theology is now shown to be grounded in history,’ he said” (Aug. 9, 2005). The scholars have been wrong again and again. The Bible has always proven to be accurate!

Scholars have even insisted that entire empires mentioned in the Bible did not exist. One example of this is the Hittite Empire. Scripture describes Abraham burying his wife in land bought from Hittite merchants (Genesis 23:17-20). The Hittites were allied with the king of Israel in fending off the Syrian Empire (2 Kings 7:6), but historians claimed they never existed. And if the Hittite Empire did exist, they said, it couldn’t have been a strong regional power. There just wasn’t any evidence for it.

But during the 19th and 20th centuries, the remains of an immense, fortified city were excavated in Turkey, along with about 10,000 clay tablets. These findings proved that this was the capital city of the Hittites of the Bible. They had a massive empire that controlled modern-day Turkey. Scholars wrong, Bible right—again.

Perhaps the one character of the Bible that historical documents actually seemed to disprove, more than any other, was King Belshazzar of Babylon (Daniel 5). Daniel records that Belshazzar was the last king of the Babylonian Empire; he was killed when the Persian Empire conquered Babylon. But historians insisted that he never existed because historical documents showed that Nabonidus was the last king of Babylon, not Belshazzar. These documents also said that Nabonidus was taken prisoner, not killed. How could this be?

Could Belshazzar be another name for Nabonidus? If that’s the case, the Bible says he was killed while other historical documents show he was taken captive. This seemed like an irreconcilable difference—until a discovery was made in 1854 in modern-day Iraq, where ancient Ur, an area ruled by Babylon, used to be.

What became known as the Nabonidus Cylinders record King Nabonidus making a request to his god for his son, Belshazzar. These cylinders show that Nabonidus spent many years away from Babylon in northwest Arabia while his son Belshazzar remained at Babylon as a co-regent and defacto king! They ruled at the same time—father and son.

The Bible backs this up. Daniel 5:29 says, “Then commanded Belshazzar, and they clothed Daniel with scarlet, and put a chain of gold about his neck, and made a proclamation concerning him, that he should be the third ruler in the kingdom.”

Why the third and not the second under Belshazzar? Because Belshazzar was the second-highest in the kingdom under his father, and the third position was the highest he could give. This also explains how the top ruler, Nabonidus, was taken prisoner while Belshazzar was killed—exactly as Daniel recorded!

In his book A Survey of Old Testament Introduction, Gleason Archer Jr. quoted author John Elder as saying, “Little by little, one city after another, one civilization after another, one culture after another whose memories were enshrined only in the Bible, were restored to their proper places in ancient history by the studies of archaeologists …. Contemporary records of biblical events have been unearthed and the uniqueness of the biblical revelation has been emphasized …. Nowhere has archaeological discovery refuted the Bible as history” (emphasis added).

You can count on the Bible to be accurate and true!

Psalm 102:13-14 say, “Thou shalt arise, and have mercy upon Zion: for the time to favour her, yea, the set time, is come. For thy servants take pleasure in her stones, and favour the dust thereof.”

This is a prophecy showing that archaeological projects would take place in Jerusalem at the end time. Who is involved in the most significant discoveries recently found in Jerusalem? Dr. Eilat Mazar and this tiny Church. This is one of the many proofs of where God’s true Church is! Look at what has been found so far: David’s palace, the bullae of Jeremiah’s accusers, Nehemiah’s wall, Solomon’s wall and the bullae of Hezekiah and Isaiah.

A book titled The Miracle of Freedom: 7 Tipping Points That Saved the World, by Chris and Ted Stewart, explains the significance of the events that were illuminated in the “Seals of Isaiah and King Hezekiah Discovered” exhibit. The premise of the book is that America and the Western democracies would not exist today if it weren’t for seven tipping points in world history.

“Simply put, the case we intend to make is this: Freedom and democracy are extraordinarily rare events in human history. Indeed, only a tiny fraction of humans have been given the opportunity of living in a free land ….” They estimate that only about 5 percent of all people who have ever lived have experienced freedom, and their freedom is due mostly to the emergence of the Western democracies in the last few hundred years. We know that it is because of the promises God made to Abraham.

“Throughout history, critical tipping points have occurred upon which the foundational elements of democracy and free governments have been laid …. All of them were necessary for the world to enjoy the sudden expansion of free governments that we see today. It wasn’t inevitable that the Free Age would evolve as it did. The outcomes that generated this wave of freedom were never assured, and world history would have been dramatically altered if any one of these events had turned out differently, making the golden age of freedom impossible in our day.”

The first of the tipping points in world history that this book describes is Sennacherib’s defeat at Jerusalem:

“If the term terrorism could apply to any regime, it certainly could apply to the Assyrian method of conquest, for they were as savage as any regime known in the history of man …. For people living in the Near East 700 years before the birth of Jesus Christ, the cry, ‘the Assyrians are coming!’ would have caused hearts to tremble and blood to rise in fear.”

The book details what they did to the survivors of Lachish—the second biggest city in Judah at the time—in order to strike fear into the inhabitants of Jerusalem. It was gruesome, and the Jews did have reason to dread the Assyrians. But we know how it ended, and here is why that is important:

“The result was critical to the development of the modern world, for had Assyria succeeded in destroying Judah and Jerusalem, its population would have been ‘lost,’ as were the 10 tribes before. Had this happened, there would have been no Jewish state in which to plant Christianity …. [T]he fact that the Jewish religion survived clearly paved the way for the birth of Christianity. And … without the foundation of Christianity, the freedom and democracy that we enjoy in this golden age would not have been possible. Little did the people living in the days of the Assyrians comprehend the critical role that Sennacherib, Hezekiah and the retreat of the Assyrian army back to Nineveh would play in the development of freedom and democracy during the centuries to come.” We would include the Prophet Isaiah in that list as well.

Talk about letting the stones speak! Look where the world premiere of those bullae was showcased: in God’s house with the pcg! Doesn’t that prove who we are? Those bullae in God’s house shouted out that God spared Judah from the Assyrians so that His promises to Abraham would be fulfilled according to His plan, so democracy and freedom could flourish in the end time, and so God could do His Work, preparing for the return of Jesus Christ, which will finally put an end to man’s history of war and bring freedom to the whole world. These bullae represent freedom under God!

And now we have David’s throne, and that is all about uniting the world and establishing true freedom in the world forever! (See our article “Just What Do You Mean—New Throne?”on pcg.church). It’s all linked together and makes your head spin.

Archaeology certainly proves that the Bible is the authentic Word of God!