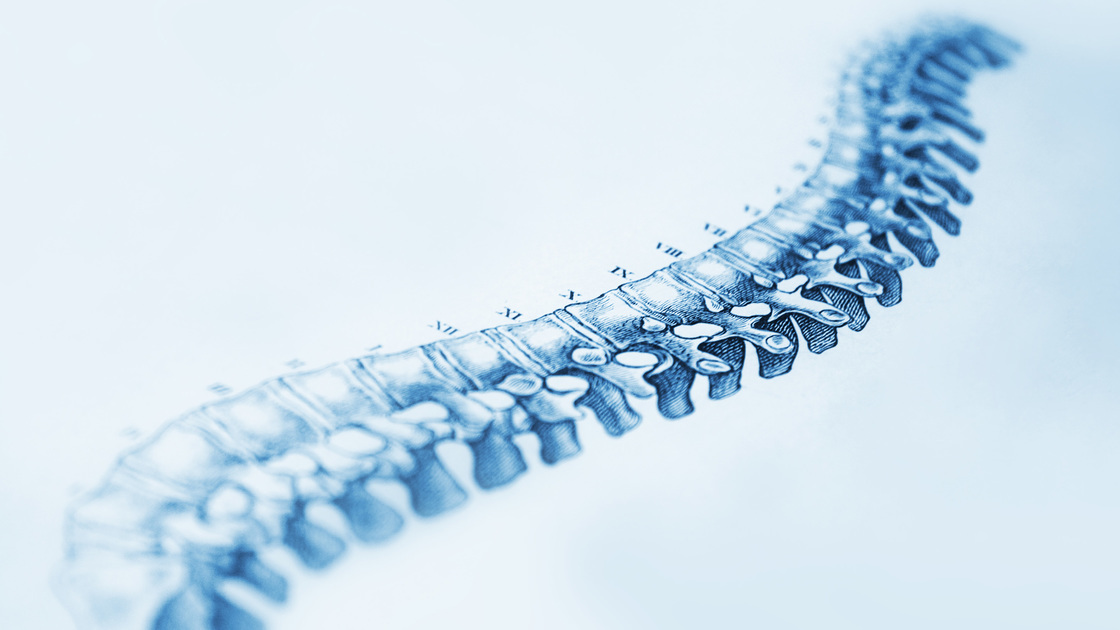 If you had no spine, your body would be like a bowl of Jello—without the bowl. It would look like a skyscraper after demolition. You know, when they blow it up and it falls directly onto itself in a heap of rubble.

Your spine is the anchor for everything in your body. Your head is perched on it; your rib cage hinges on it; your muscles are attached to it like lines to the mast of a ship.

A strong backbone enables you to stand upright, to remain balanced, to move with confidence. It has 24 individual ring-shaped bones called vertebrae, which serve as a protective case for your spinal cord. That’s the main highway for information from the brain to every other part of the body. If you cut that cord, you’d go numb and lose muscle control.

Just about every animal has a backbone. Lions, bears, birds, fish, snakes. Even insects have one—though theirs is often on the outside of their little bodies.

What’s the best an animal can manage to be without having a spine? A jellyfish, a squid or a worm.

If you look up “spine” in the dictionary, the first definition will be something like, “the vertebral column; backbone.” Everybody has one of those.

But around the fourth definition, you’ll probably find, “a quality which constitutes strength; resolution; stamina.” Though it’s just as important, this type of spine isn’t nearly so common.

It was this latter meaning that Elbert Hubbard intended when he wrote: “It is not book-learning young men need, nor instruction about this and that, but a stiffening of the vertebrae which will cause them to be loyal to a trust, to act promptly, concentrate their energies ….” Loyalty, prompt action, concentration, energy. Those things come with having a strong metaphorical spine.

Having a spine means working hard, in school or on the job, even when you feel like ducking away. It means doing what needs to be done. It means following through with what you say you’ll do and fulfilling your responsibilities (e.g. Matthew 12:36). It means earning a reputation for being Mr. or Miss Dependable.

Having a spine means not going squishy or limp under peer pressure. It means keeping anchored, standing up tall for what you know is right. “Thou shalt not follow a multitude to do evil …” (Exodus 23:2). It sometimes means not fearing confrontation. It means not being a coward. “Be strong and of a good courage, fear not, nor be afraid of them: for the Lord thy God, he it is that doth go with thee; he will not fail thee, nor forsake thee” (Deuteronomy 31:6). It means speaking the truth and saying what needs to be said even when doing so could have frightening consequences (e.g. Daniel 3:16-18).

Having a spine can mean knowing when to admit you are wrong—putting the truth above your own pride. It means being upright, honest—loyal to God, family and friends.

Often it means putting others’ needs above your own. “Look not every man on his own things, but every man also on the things of others” (Philippians 2:4). When you hear someone called a spineless worm, that usually means he put himself first, even to another’s hurt.

Having a spine means being tough. “Thou therefore endure hardness, as a good soldier of Jesus Christ” (2 Timothy 2:3). You are not a squid. Your body was made to be used: running, dancing, swimming, chopping, lifting. You can take it. Too much tv or video games and you actually start looking like a jellyfish.

Having a spine will hold your life together, just as it holds your body together. It will preserve your relationships and ensure success on the job. “He that walketh uprightly walketh surely: but he that perverteth his ways shall be known” (Proverbs 10:9; the English Standard Version reads, “he who makes his ways crooked will be found out”). Walk uprightly—an individual with a strong physical and moral spine! The blessings are immeasurable.

Granted, this isn’t easy. It takes effort to develop and strengthen real backbone. It doesn’t come naturally. You may have been born with 24 fully functional vertebrae in your body and still be a mental or emotional quadriplegic.

When we talk about spine, we’re really talking about developing the most important thing possible in your life—the thing that will enable you to die happy:

So how do you strengthen your backbone? First, learn the right way to live. You’re doing that even now—just keep it up your whole life long. Next, buckle down and do what you know you should, no matter how hard! And then, when you fail, this is the most important time to show some spine. Get back up and try harder!

Most importantly, look to God to supply the strength you need. He promises, “Fear thou not; for I am with thee: be not dismayed; for I am thy God: I will strengthen thee; yea, I will help thee; yea, I will uphold thee with the right hand of my righteousness” (Isaiah 41:10). That is where the character you need ultimately comes from. But He’ll only give it to you as He sees you going after it.

Is your backbone weak? You have everything to gain from “a stiffening of the vertebrae”—developing some spine. Stand up to the challenge!