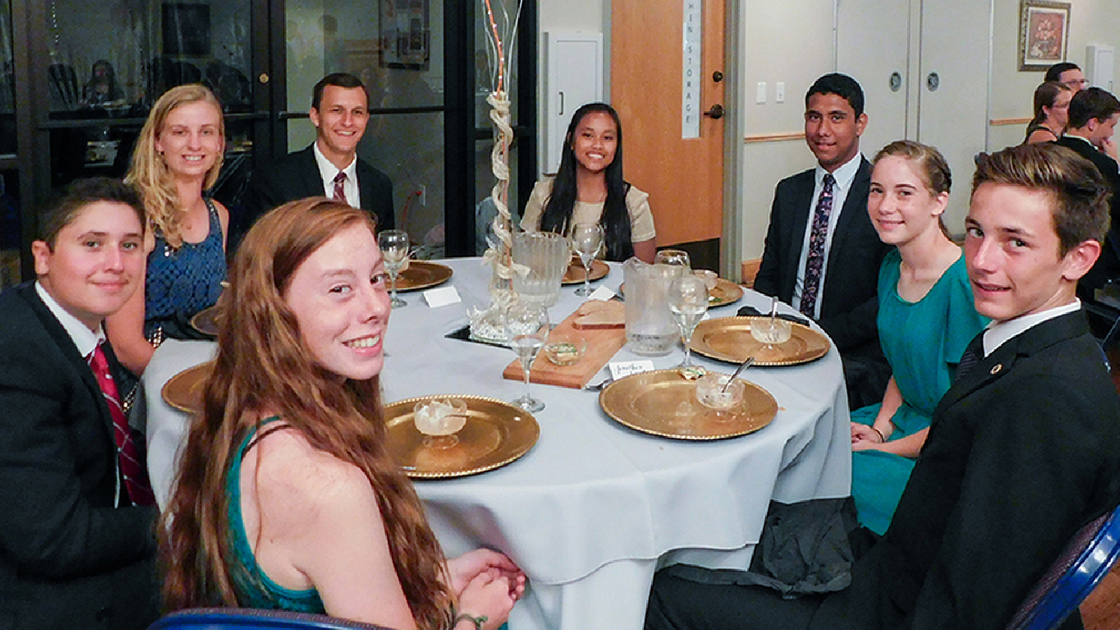 Camp Director Stephen Flurry started pyc Etiquette Night 2019 by telling the campers about the daily habits of former British Prime Minister Winston Churchill. Though he had many important responsibilities and roles, he took time to host formal occasions and enjoy fine dining. It seemed like madness and confusion to some around him, but Mr. Churchill’s schedule was extremely well thought out and organized. He realized that the time he put aside for high culture was important and necessary. Mr. Flurry reminded the campers that implementing a royal standard is important and necessary in their own lives as well.

Instead of their usual pyc T-shirt and athletic shorts, campers were dressed in their nicest non-formal dresses and suits for the occasion. Extra time was even allotted into their schedule to allow for hair-curling, card-writing, shoe-choosing and any other preparations they needed in order to maintain the highest standard. The décor of the night was primarily cream with forest green accents. In the center of the tables sat glass bottles surrounded by greenery and brimming with twinkle lights. A stone bench rested in the corner amidst a backdrop draped in tulle, twinkle lights, and delicately hanging cream flowers.

The meal consisted of five courses, starting with an appetizer of spinach artichoke dip, surrounded by sliced carrots and cucumbers, seasoned crackers, and pretzel sticks. While we enjoyed our first course, Mrs. Amy Flurry explained to the campers the finer points of etiquette, including which specific utensils are used for what course, how to properly use them, and how to politely eat soup. The salad was brought next: a bed of spinach topped with parmesan, candied walnuts, and a drizzle of balsamic dressing, garnished with thinly sliced strawberries.

When Mrs. Flurry had finished, the various tables began to fellowship as they enjoyed a kabocha and butternut squash soup, garnished with roasted pumpkin seeds. Campers from dorms two and four were present at my table, as well as fellow staff workers Zechariah Henderson and Aebra Hayes. As we chatted, we were served the main course. It consisted of beef wellington, imprinted with a crown symbolizing the royal standard of the night, green beans roasted in butter and garlic and wrapped in bacon, and mashed potatoes garnished with fresh chives.

When we had finished the fourth course, Mr. Flurry returned to the lectern to begin the topics session of the night. “What is your favorite meal in recent memory?” Mr. Flurry asked, starting out with a basic question. Spencer of 2B related his partiality towards his mom’s Night to be Much Observed filet mignon while his assistant counselor, Jared Schow, told a tale of an appetizing Irish steak.

Mr. Flurry’s next question, while still unchallenging, provoked a little more thought, “What was the most memorable event of pyc this year?” 2G’s Megan and Sophia both agreed that the cycling trip (which included a sack-lunch and dip in a local Oklahoma lake) had created lasting memories.

“What inspires you to study history?” Mr. Flurry asked. 2G assistant counselor Carleigh Blanchat said that she had developed a love for history since seventh grade. She now serves as the history assistant at Imperial Academy.

While the campers answered a few more questions, the final course was served. Dessert was a cookie, decorated with “RL” (Royal and Loyal), and vanilla and fudge ice cream.

For his final question, Mr. Flurry asked, “What scripture do you think of when you think about being in God’s Family?” Seven of 4B responded with 2 Timothy 1:7, “For God hath not given us the spirit of fear, but of power, and of love, and of a sound mind.”

After the question portion of the night had been concluded, the campers huddled around the picture booth in the corner, exchanging cameras and snapping photos. Then, they put away the decorations and rearranged the cafeteria. After the dining hall had been restored, the campers walked back to their dorms, feeling very royal indeed after such an elegant evening.