PYC 2019: Dorm 6B Battles Mistakes, Perseveres in Close Flag Football Loss
The blue-shirted campers of dorm 6B engaged in an exciting contest with 5B.
By Grant Turgeon • July 25, 2019 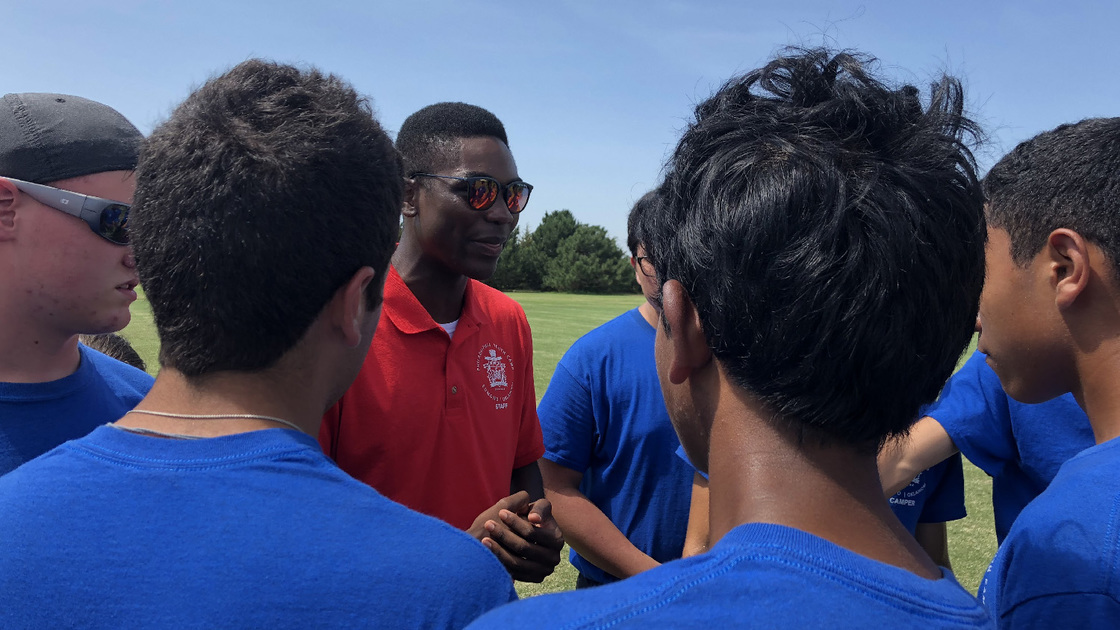 My 2-year-old daughter, Loma, wearing a green-and-yellow South Africa football jersey, crept through the tiny patch of woods north of the Herbert W. Armstrong College soccer pitch with me on Sunday morning, July 21, to watch the blue boys of dorm 6B take on 5B in an enthralling Philadelphia Youth Camp flag football game.

Flag football instructor Jason Cocomise and his sons, Titus and Marcus, were already under the big white-and-yellow-striped tent next to midfield, along with assistants Kyle Hardin, Zechariah Henderson and Aebra Hayes. Loma wandered off to explore the piles of equipment while I chatted with Mr. Cocomise and Titus about the Chicago White Sox.

Dorm 6B’s counselor, Daniel Cocomise, was absent from the class due to a strange tradition at pyc: the counselor swap. Assistant Rufaro Manyepa commandeered the dorm, and 6G counselor Stephanie Szabo supported him and the boys with a cooling spray bottle and bundles of encouragement.

To prepare for the flag football contest, dorm 6B, quarterbacked by Jacob, ran routes and executed a defensive footwork/flag-pulling drill. I noticed that Jacob was wearing a quarterback’s flip-open wristband that was blank on the outside sleeve, so I asked where all the fancy offensive schemes were hidden. He peeled back the sleeve to reveal the secrets of his team’s machine-like offense.

The game format was 8-on-8, with no kickoffs or punts, 20 yards to go for a first down, and the possibility of kicking the point-after-touchdown or running an offensive play from various distances for one, two or three extra points. The first half started horribly for dorm 6B. Dorm 5B scored quickly on a fake handoff to the right followed by a short throw to the left flat. Dorm 6B’s entire defense fell for the fake, leaving the left side of the field wide open for 5B’s Zachary to trot up the sideline and into the end zone for six points. The short extra-point kick was converted for an early 7-0 lead.

Almost as soon as dorm 6B got the ball, they gave it up deep in their own territory via interception. Dorm 5B scored another quick touchdown on the exact same play that yielded their first score.

At this moment, it appeared as though all hope was lost. Facing a 14-0 deficit, dorm 6B began another offensive possession on the precipice of a blowout.

Instead of caving like most teams in this situation would have, the blues (representing the Bears in honor of their counselor’s favorite team) commenced a methodical march southward. Buoyed by a massive run by Jacob, they wound up near the opponent’s goal line after just a handful of plays.

Progress bogged down for a bit after the big play, but they finally broke through with a touchdown catch by Jaden, who ran a delayed buttonhook route after releasing from the offensive line. The half ended with a goal-line stop by 6B, keeping the score at 14-7.

At halftime, I told 6B to play loose coverage and keep the opposing receivers in front of them on defense, then break hard for the ball and intercept it once it is thrown. Aaron had almost done exactly that in the first half but just couldn’t hold on. My brother, Micah, an incoming Armstrong freshman, appeared out of nowhere during the break. Morale was high, as is always the case around Micah.

In the second half, dorm 5B (representing the Arizona Cardinals, counselor Warren Reinsch’s favorite team) scored another touchdown on the exact same play as their previous two scores.

As dorm 6B attempted a comeback, I told Jacob to try throwing deep to force 5B’s defense to back off the short throws. He did so, just missing Aaron on the first attempt before connecting with him for a long bomb touchdown to bring the score to 21-14. Dorm 5B quarterback Samuel sealed the victory for his squad with a rushing touchdown as time expired.