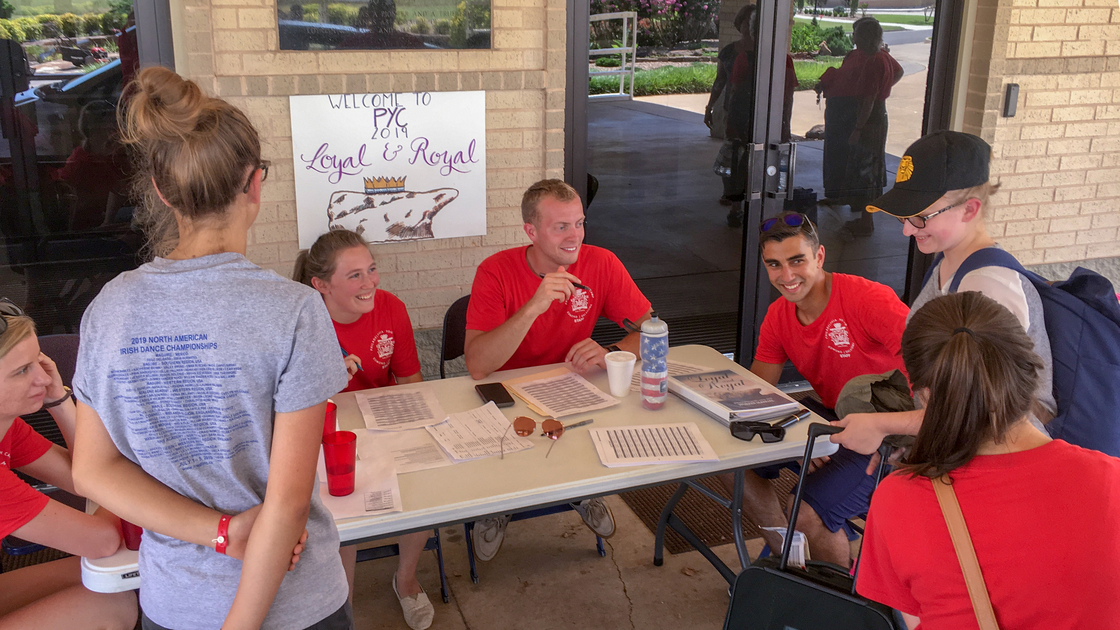 “Bruuuummmmm…” The hum of the 15-passenger van, just arrived from the airport, brought a wave of excitement to the huddle of red-shirted workers crowded around the greeting table outside of the John Amos Field House. The moment they had been prepping campus for and excitedly looking forward to since the last was here—Philadelphia Youth Camp 2019 had begun. The campers were arriving.

By 2:00, there were already about 40 campers scattered about the John Amos Field House gymnasium, alternatively reuniting with old friends and introducing themselves to new. A few practiced shooting hoops while yet a few more passed a volleyball around in a circle. One particularly eager camper arrived already dressed in a blue dorm 2B T-shirt which he had received at a previous pyc.

Many of the 33 first-year campers clung to the more experienced campers who helped them to branch out by introducing them to other campers. Fifth-year camper, Daniel, said that he would like to use his final year of camp to put, “extra emphasis on trying to be an example of the joy that can come from your camp years if you use them appropriately.” Many siblings and cousins were also reunited.

As more campers began to arrive, a few workers arranged the basketball hoops and volleyball net to provide space for both sports. A lively volleyball game soon ensued, and with a little help from the workers, the campers were able to maintain a game of successful volleys. One particularly high pass sent a ceiling tile plummeting to the floor below. This impediment halted the event for a mere moment, and after the debris was cleared, the game resumed with all the intensity it had held before—though, perhaps with a gentler approach. No campers were harmed in this event.

On the other side of the gym, the more basketball-savvy campers went head-to head on the half-court. Aussie camper Yannis scored an impressive three-point shot in a one-on-one match with another camper.

The gym was filled with mingling accents as campers from the Netherlands, Australia, South Africa, Canada, and England began to arrive. Hannah, a camper from the Netherlands, recounted the approximately 24-hour trip she had made with three other campers. It had been a long, tiring journey, including layovers in both London and Chicago, but she was looking forward to upcoming events, especially the activities involving her favorite sport: soccer.

By 4:00 pm, about 70 percent of the campers had arrived in the field house gymnasium. Fellowship and sports continued until 5:15 when the traditional first-day-of-camp dinner, fettuccine alfredo, was served to the hungry campers. After dinner, the satisfied campers and workers alike headed off for the next event on the menu: pyc Orientation.