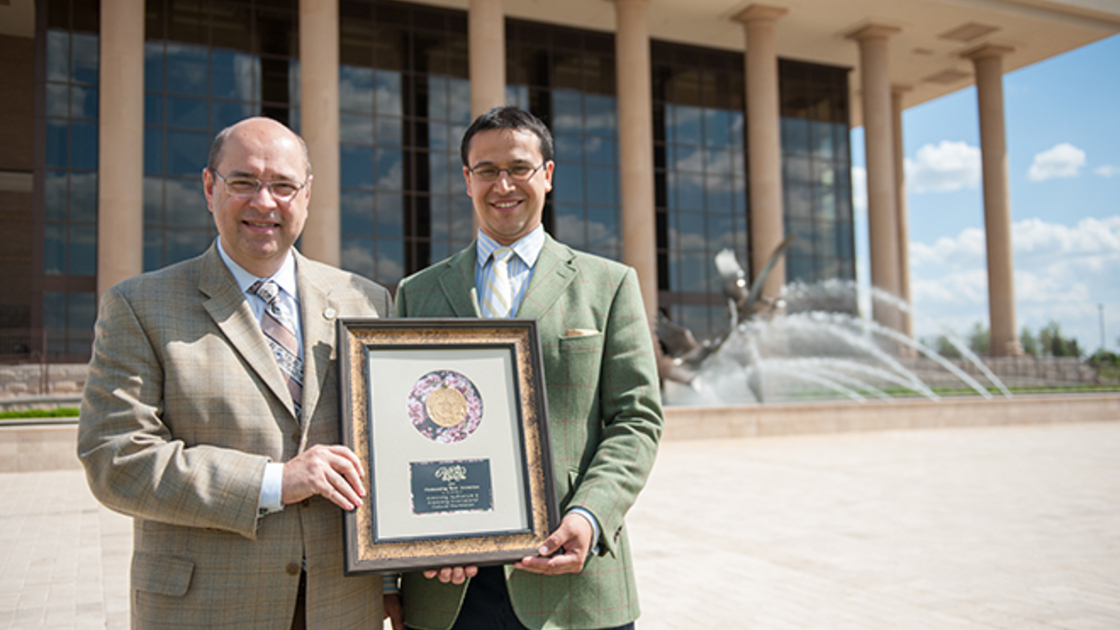 EDMOND—Two Armstrong International Cultural Foundation representatives accepted the Outstanding New Attraction award on May 13 on behalf of Armstrong Auditorium during the RedBud Awards banquet at the Oklahoma History Center in Oklahoma City. The annual event, hosted by the Oklahoma Travel Industry Association, recognizes Oklahoma tourism attractions, destination marketing organizations and journalists for their endeavors in serving and promoting state tourism over the past year.

“Not every category is awarded a Redbud,” Armstrong International Cultural Foundation marketing director Shane Granger explained. “They only give a RedBud award if they feel it’s worth it. When they announced our name as winner, the audience cheered in approval. There was a really big ‘hoorah’ that went up from 200 people. I was shocked.”

“It was of course an honor and privilege to physically receive the award, alongside Mr. Granger, from Lieutenant Governor Todd Lamb in front of the leaders of Oklahoma tourism,” aicf head usher Edwin Trebels said. “All who have contributed to Armstrong Auditorium can be proud.”

“It’s a great honor for Armstrong Auditorium to be recognized with such a prestigious award for both the quality of its craftsmanship and its concert roster,” Granger said. “This award demonstrates the impact the auditorium is having on tourism in Oklahoma.”

Granger said Lamb and Reynolds kept the proceedings pithy so guests could watch an Oklahoma City Thunder playoff basketball game, which tipped off about two hours after the Redbud Awards ceremony began.

Before the ceremony, Granger and Trebels milled about the Oklahoma History Center for an hour, examining binders on display that told the stories of different attractions vying for an award across the state. Others browsed the Armstrong Auditorium binder, which included a summary, visitor statistics, brochures, press releases, articles and photos. They also mingled with tourism bureau officials, event organizers, professors, business owners and other attendees.

Officials in the Edmond Convention and Visitors Bureau recommended a few months ago that Granger submit applications for Armstrong Auditorium and the Seals of Jeremiah’s Captors Discovered exhibit. The auditorium was barely eligible for entry since the Outstanding New Attraction award only covers attractions open three years or less by the end of 2013. Armstrong Auditorium opened in September 2010.

Granger said the Edmond Convention and Visitors Bureau officials have been tremendous ambassadors for Armstrong Auditorium. “They see it as a huge asset, a big draw, for Edmond,” he said. “They bring a lot of people here. They consider it the pride of Edmond.”