Why You Need This Book
Unlock life’s mysteries.
By Gerald Flurry • June 21, 2019 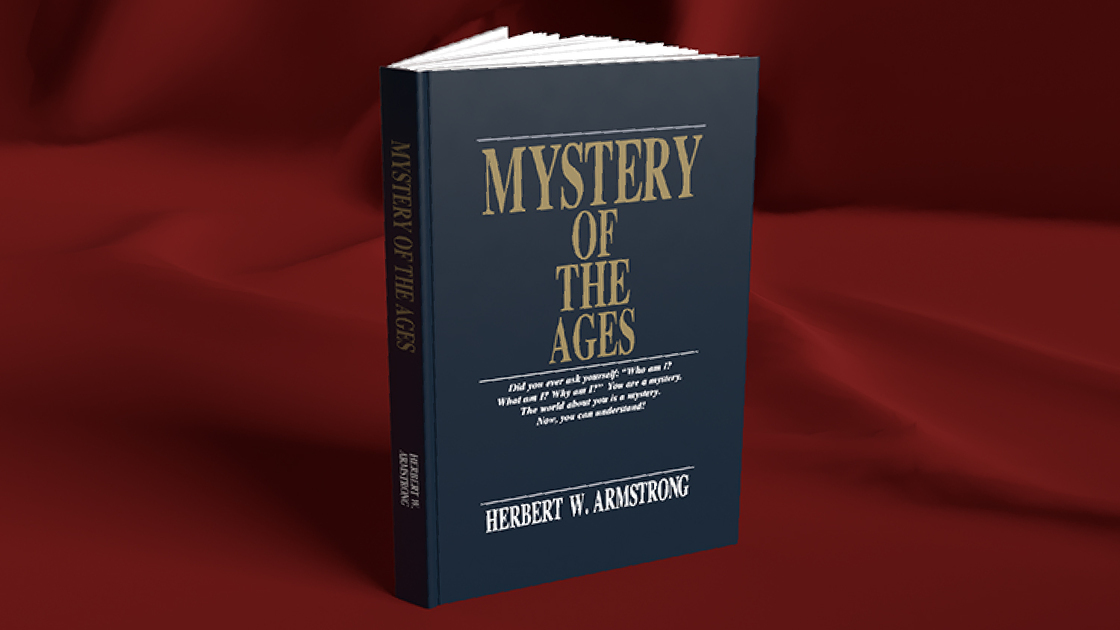 We give away a lot of free literature and educational material. The book we have given away more than any other is Mystery of the Ages. This is a masterful work by the late educator, philanthropist and unofficial ambassador for world peace Herbert W. Armstrong. Thousands of people have said that this book, when they have applied its teachings, has brought real meaning to their lives and given them true happiness!

Mystery of the Ages isa synopsis of the Bible. It allows you to understand God’s Word, which would otherwise be a mystery.

On the cover of the book, Mr. Armstrong wrote, “Did you ever ask yourself: ‘Who am I? What am I? Why am I?’ You are a mystery. The world about you is a mystery. Now, you can understand!”

With this life-changing book, the Bible is decoded before your eyes, if you want it to be!

Look at society around you. Clearly the Bible is a mystery to most of humanity. It is the world’s bestseller that nobody knows. It is a mystery to science, to education, even to religion! God is not real to most people. But Mystery of the Ages will make God real to you. This book will make God come alive and understandable to you.

For this reason, Mr. Armstrong considered Mystery of the Ages the second-greatest book on Earth after the Bible.

Industrially and technologically, the progress or the appearance of progress in this world is impressive. Yet at the same time, our world is plagued by alarming and appalling evils. How can you solve these problems? Science cannot tell you. Education cannot teach you. Even religion is failing! This is a mystery.

Mystery of the Ages shows you how the world’s problems will be solved.

Mr. Armstrong knew a lot about humanity. He visited kings, emperors, presidents, prime ministers and many other heads of state. He met more world leaders than any other religious leader in history. He also met with many thousands of the illiterate, poor and poverty-stricken.

Mr. Armstrong craved understanding. He grew up in a Protestant church, but he said in all the time he attended, they never explained these plaguing questions. The Bible was bewildering to him.

Eventually he was challenged on questions regarding Sunday observance and the theory of evolution.

When studying night and day to prove or disprove evolution, Mr. Armstrong found absolute proof of the existence of God. The theory of evolution was wrong! He proved that the Bible has God’s absolute authority behind it.

But why can’t people generally understand the Bible? “I found the Bible to be a coded book,” Mr. Armstrong explained in Mystery of the Ages, “with answers to the paramount mysteries confronting all humanity. … Instead of putting the various pieces of the jigsaw puzzle properly and sensibly together, it has become the practice and custom to read an already-believed false teaching into each particular scripture, taken out of context. In other words to interpret the scriptures to say what they have already been taught and come to believe. The Bible needs no interpretation because it interprets itself.”

That is an important point: The Bible interprets itself. How many people truly believe that?

Mr. Armstrong continued, “This becomes clear when one sees the various scriptures of each subject properly put together, as the Bible itself says, ‘here a little, and there a little’ (Isaiah 28:10).”

In the context of this statement, the Prophet Isaiah wrote that even the priests and prophets, religious leaders, are teaching error (verse 7). God is showing us that we will learn nothing unless we get away from the milk, spiritually (verses 8-9). You cannot be tied to the educational system or scholars of this world. You must break away, look into your Bible, and let the Bible interpret itself. Don’t allow men to deceive you. As the Prophet Jeremiah wrote, “Cursed be the man that trusteth in man” (Jeremiah 17:5).

To receive strong spiritual meat (Hebrews 5:14), you must break away. Prove that God exists and that the Bible is His Word, and then rely on the Bible and what God says in it.

“[T]he Bible was a coded book,” Mr. Armstrong wrote, “not intended to be understood until our day in this latter half of the 20th century.” Can you believe that? The Bible was not even intended to be understood until this end time—the time we are living in today—just before the return of Jesus Christ to this Earth to teach the whole world with this Word!

“I learned that the Bible is like a jigsaw puzzle—thousands of pieces that need putting together—and the pieces will fit together in only one way,” Mr. Armstrong continued. “Then the picture becomes crystal clear to the one willing to believe what God our Creator says.

“This present book merely puts the many pieces of the great puzzle together so they can be clearly understood.

“As you read and reread this book, compare constantly with your own Bible.”

Mr. Armstrong challenged readers to compare Mystery of the Ages to the Bible, and let the Bible interpret the Bible! Just ask us, and we will send you a free copy of this book. But you have to study it along with your Bible. It takes deep study and meditation to truly understand how profound it is!

In the introduction to his book, Mr. Armstrong wrote, “Time may prove this to be the most important book written in almost 1,900 years.”

This world truly has been blinded to the wonderful truth in Mystery of the Ages. They don’t know why man; what is our purpose. All this mystery is being decoded in the end time for a great purpose—a purpose that God planned.

Read the last few verses of Genesis 3. There, after Adam and Eve sinned, God drove them out of the Garden of Eden and closed off access to the tree of life. Mankind was cut off from that tree so they wouldn’t live forever in a miserable, unrepentant state. There are conditions to receiving the tree of life.

Regarding this point, Mr. Armstrong wrote, “God had closed the Holy Spirit and eternal life to mankind in general until the removal of Satan at the Second Coming of Jesus Christ.”

Consider what this means! Many people believe there is a battle going on between Satan and God for people’s souls. But if that were true, Satan is clearly winning the battle! That is not true at all! All the way back to Adam and Eve, God cut man off from the tree of life, from Himself, and from the Holy Spirit!

Traditional Christianity also teaches that Christ was sent to Earth to win that battle and to try to turn the whole world to God and save mankind. Of this view, Mr. Armstrong made this astounding statement: “For some years I had come to partially realize the error of this assumption, but the full truth on this point had not come crystal clear to me until very recently.” He wrote that when he was 92 years old! Only then did he finally understand the full picture!

“This truth is indeed mind-boggling,” he continued. “It clears what had been clouded in mystery.”

After Jesus Christ returns, everyone will have access to God (John 8). No one will be cut off unless they simply refuse to obey God.

This understanding, which can be proved from your Bible, explains so much! God is not desperately trying to win the world over and defeat Satan in battle. There is no contest. God is doing exactly what He planned to do.

Mystery of the Ages explains many truths that mystify this world. It has seven chapters that are each built around removing the veil around a major mystery.

The first is “Who and What Is God?” God reveals Himself through the Bible. The truth is far more inspiring than most religions realize, because people’s eyes are blinded to it. If religionists would just believe God and His revelation, they would understand this truth.

The second is “Mystery of Angels and Evil Spirits.” The Bible says this world is ruled by unseen evil spirits—but this is a terrible mystery to this world.

Third is “Mystery of Man.” What is humanity here for? Traditional Christianity teaches that you have an immortal soul, but is that true? You need to find out!

Fourth is “Mystery of Civilization.” This world has made awesome progress in some areas, but developed terrifying evils as well. Technology, science, industry and religion profess to have understanding, but they cannot solve their own problems. That is the truth!

Fifth is “Mystery of Israel.” This is a crucial biblical truth that few understand.Is Israel the chosen people? What is Israel’s purpose? Does God have favorites? You need the answers because the Bible is a book about Israel!

Sixth is “Mystery of the Church.” Is there one true Church, or are there many sects and denominations? Is it a large, universal church, or a small, persecuted church? These are vital questions you need to answer.

Finally is “Mystery of the Kingdom of God.”This is the gospel message! Gospel means “good news,” and that news is a message about the coming Kingdom of God that will administer the government of God. That gospel is a mystery even to religion, but we must understand what the gospel is about!

If you read through the Bible, you will be bewildered. It is truth that must be revealed by God. Once you follow God’s formula, then He reveals the Bible to you. That is happening for many people in this end time.

There are steps we must take, however.

Jesus Christ thanked God that the truth was hidden from educated, wealthy people and instead revealed to babes, or humble people (Matthew 11:25). You must be childlike to understand God’s truth. Unless you become humble as a little child, Christ said you will never be in the Kingdom (Matthew 18:4).

The beginning of wisdom is the fear of God. Those who keep His commandments have that fear (Psalm 111:10). Traditional Christianity teaches that those commandments were done away; they are no longer necessary. They believe that Christ took care of that for us. Is that true?

To understand God’s truth, you need God’s Holy Spirit. God gives us His Spirit to open up the human mind (1 Corinthians 2:9-11). To receive that Spirit, you must follow the formula the Apostle Peter gave: “Repent, and be baptized” (Acts 2:38). You must turn to God, change your ways, and be baptized by a true minister of God.

Are you willing to take such steps to have this invaluable understanding? Mr. Armstrong was filled with unspeakable joy as he learned these new truths. If we have God’s truth, we will be filled with joy!

Think about the time we live in. Mankind does not know the way of peace or joy. Half the world’s population is illiterate. Many live in filth and squalor, plagued by starvation and disease. These are hopeless circumstances!

Many nations possess nuclear weapons, and it only takes one madman to start a nuclear World War iii. The Bible tells you that one madman will do just that. These are terrifying times. But science, education and religion do not have the solutions. There is no way they can solve these problems that, if left alone, will lead to human annihilation.

But God has the solutions. He has had them all along. But we have rejected them and tried to solve things our own way. It has never worked, nor ever will.

Christ says that mankind has closed their eyes! (Matthew 13:15). But you can understand these seven mysteries and the truth of God in a way that you never have before! That is God’s goal for you. Will you accept His offer?