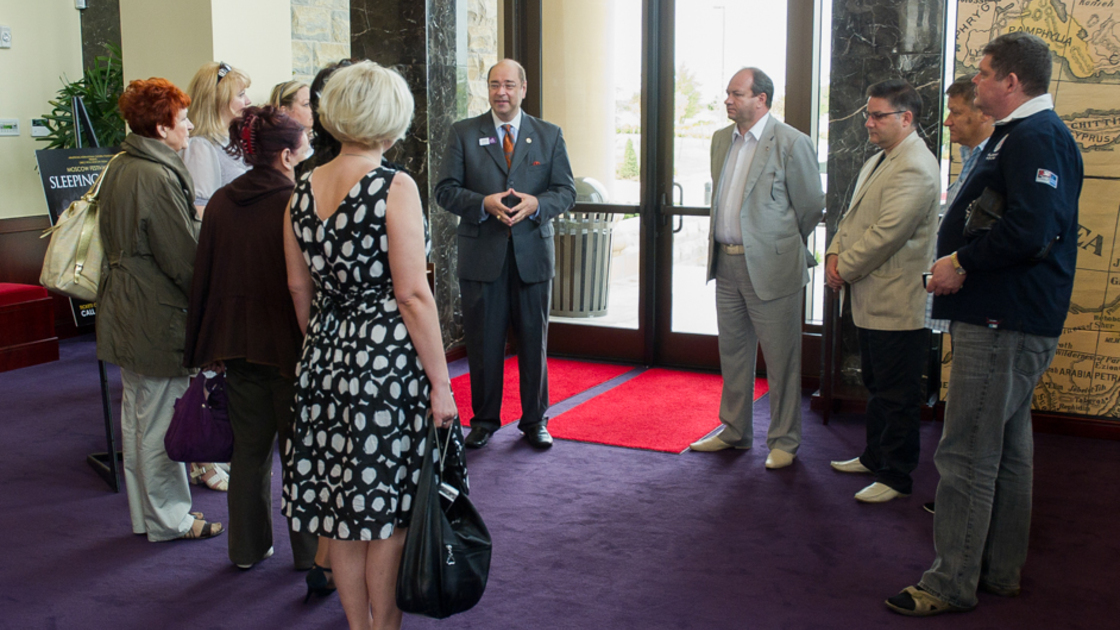 EDMOND—Philadelphia Church of God headquarters operations in Edmond, Oklahoma, is organized into about 20 departments, one of which is Public Relations. This small department represents and promotes the Church and its initiatives, such as the Armstrong International Cultural Foundation, to the general public.

PCG Public Relations was established in 2006. One of its first major projects was to hire a marketing consulting firm to help it publicize the construction of Armstrong Auditorium, the concert venue for the foundation’s performing arts series. The department hosted more than 100 tours of executives at the building site, one of which led to the auditorium appearing on the front page of the Oklahoman newspaper. The department also publicized the opening of the auditorium and coordinated the visit of sculptor David Wynne to the campus, as well as media interviews regarding his Swans in Flight sculpture.

The department promoted the “Seals of Jeremiah’s Captors Discovered” archaeology exhibit at Armstrong Auditorium (2012-2015) and the “Seals of Isaiah and King Hezekiah Discovered” exhibit (2018-2019), which each attracted thousands of visitors to the auditorium. In 2014, it accepted the 2013 “Outstanding New Attraction” Redbud Award on behalf of Armstrong Auditorium from Lt. Governor Todd Lamb and the Oklahoma Travel Industry Association.

The department has represented the Church and the foundation at the Oklahoma governor’s mansion, on the Edmond Area Chamber of Commerce board of advisors, the Oklahoma City Chamber of Commerce board of advisors, the Sister Cities International Oklahoma City chapter and works closely with the Edmond Convention and Visitors Bureau, the Jewish Federation of Okahoma City and the Oklahoma Israel Exchange. Its staff has also represented the Church at the Consulate General of Israel in Houston and the Turkish Dialogue Institute, and has visited Turkey as a guest of the Dialogue Institute of the Southwest.

Over its 13 years, members of the department also participated in meetings of marketing professionals, including Lift digital marketing sessions and OKC Social, the Confluence conference and the Oklahoma Conference on Tourism. The department’s staff became some of the first members of the Certified Tourism Ambassador program as it established its Oklahoma branch. To date, five staff members have been certified, some of whom have spoken at the group’s events. The public relations department has also hosted a cta meeting at the auditorium.

The department has also coordinated an aerial video shoot of the headquarters campus, several television interviews to highlight the concert series, archaeology exhibits and the achievements of Irish dance students who attend the Church’s grade school, Imperial Academy. It has also delivered presentations introducing the Church and its projects to the Oklahoma City Rotary Club, Edmond-area Rotary clubs, and other service and professional organizations. It continues to manage concert series ticket sales and staffing for the foundation’s performing arts series, as well as managing ArmstrongAuditorium.org and Armstrong.foundation.

Public Relations department head Wayne Turgeon said, “The long honeymoon period is evidenced by the number of community groups contacting us to speak regarding the Armstrong International Cultural Foundation. We must be becoming better known, as oftentimes several people in each audience have attended concerts or toured an exhibit.”