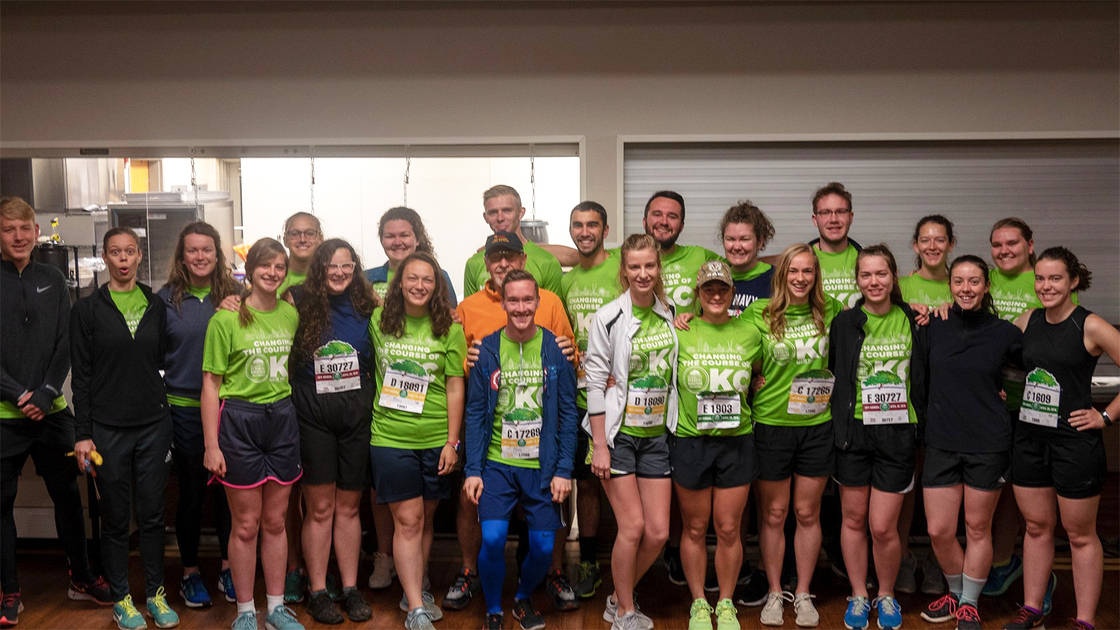 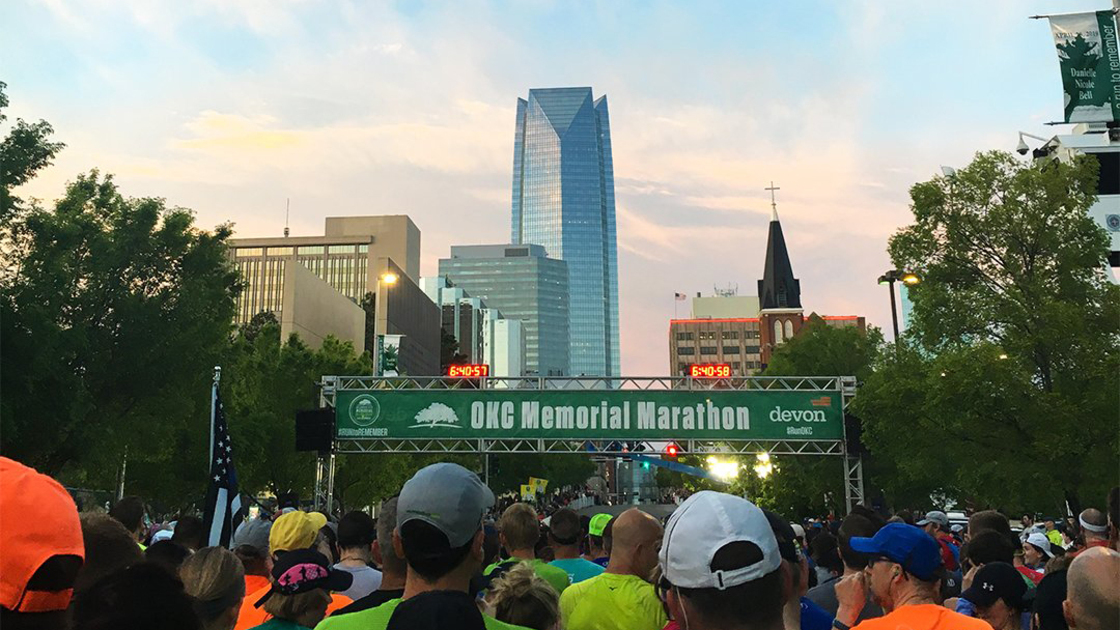 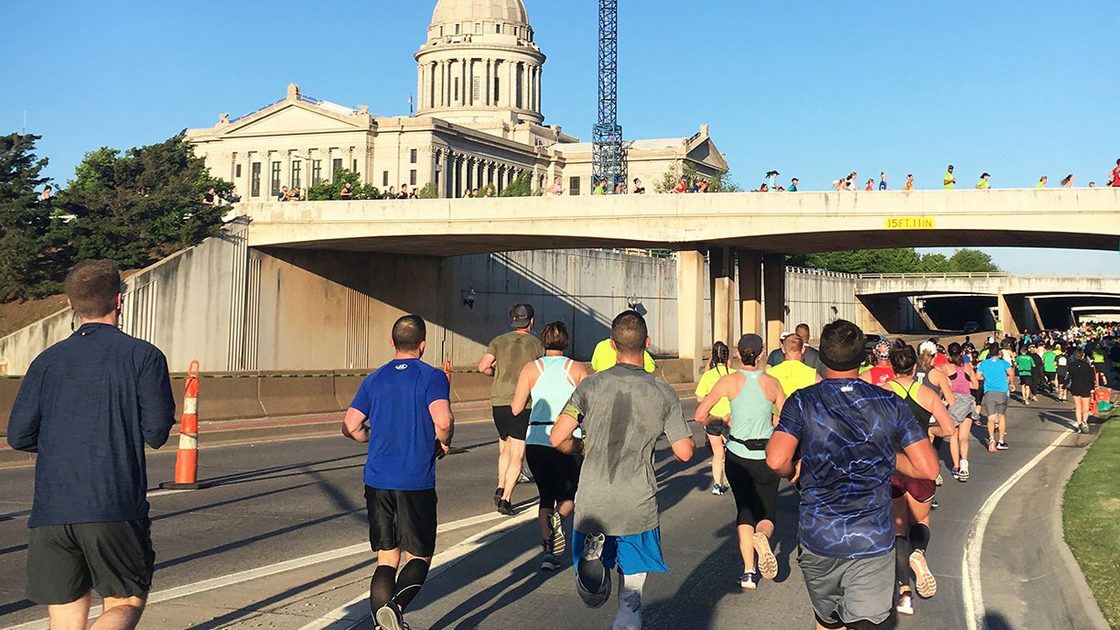 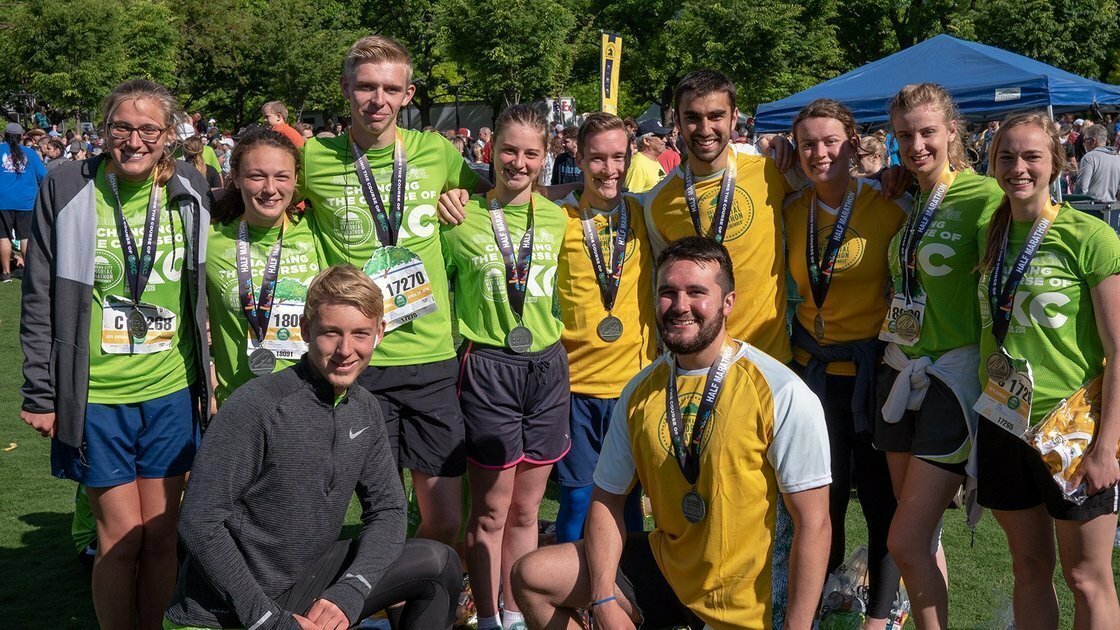 EDMOND—Thirty-one Philadelphia Church of God members participated in Sunday’s 19th annual Oklahoma City (okc) Memorial Marathon featuring a new course, some running the full marathon, others the half marathon, and some running the relay marathon.

The Herbert W. Armstrong College students who participated in the race began training just after returning from winter break in January. For months they followed a regimented schedule of workouts and running training to prepare them for race day.

Physical Education instructor Joel Hilliker worked with the runners twice a week to watch their form and give them tips.

“Working with the students,” said Hilliker, “and being involved in the marathon is a joy. It is inspiring to see them set a big goal, work hard, and train themselves to reach it.”

This “run to remember” recalls the 168 adults and children, family members and friends, lost in the bombing of the Alfred P. Murrah Federal Building in okc on April 19, 1995.

Shortly before the race began, the blaring music, the sound of racers looking for their respective starting corrals, and the instructions and introductions through the loudspeaker were hushed as the announcer declared 168 seconds of silence to remember each individual who lost his or her life on that fatal day.

Following the national anthem, the runners collectively shouted a countdown, beginning at 10, for the wheelchair racers, the first to begin. The elite (very fast) runners were released next, followed by the remaining five corrals, released in waves depending on the different paces of the runners.

Throughout the entirety of the race, 3,000 volunteers lined the streets of the city to give water, vitalyte, pretzels, free hugs, “hit for power boost” signs, other refreshments and most of all encouragement to the 25,000 runners representing 12 countries.

A multitude of signs of encouragement and humor such as “Your perspiration is my inspiration,” “Go, random stranger, go!” and “You think you’re tired? My arms are killing me!” lined both sides of the streets and were held by cheering pedestrians. Runners encouraged their fellow runners (whether they knew them or not) to push through the pain and keep running to the finish line.

“Since it was my first time participating in such a huge event, I was actually very anxious for race day,” said freshman Kathleen Hochstetler. “The crowd’s cheers and excitement fueled me and comforted me. I knew once again that I was going to finish the race. I couldn’t help but smile at every cheer yelled out during the race. Not only did that give me energy, but all the powerade and bananas had a significant part to play in that as well.”

“The okc marathon is such a positive experience,” said Hilliker. “The environment is uplifting and encouraging. It’s a celebration of people doing hard things and conquering in a challenge.”

The streets along the last few miles of the course were lined with signs reading “A Run to Remember,” each sign displayed the face of one of the victims who died in the 1995 bombing. The sobering photos kept the purpose of the race in mind all the way to the end.

The bleachers lining the finish line were packed with cheering fans producing sounds of jubilation as the thousands of racers crossed the finish line.

“For the half marathon,” said freshman Alex Barrett, “I had to push myself more mentally and it was to the point that I just had to tell myself mentally to keep going. After it was over, however, it seemed like it wasn’t as hard, and now I am looking forward to next year and am aiming to do the full.”

“I have always enjoyed running, but I never contemplated running a ½ marathon or marathon,” said pcg faculty member Dennis Leap. “In early 2018, recognizing that my health was declining—I was overweight and sluggish; my blood sugar, blood pressure and bad cholesterol were elevated—I visited a chiropractor who told me that if I made better food choices and began exercising I could turn things around quickly. I took up the challenge. I started walking and watching my diet, and things began to change. I started running again once I lost about 25 pounds. Then in August of 2018, I decided to train for a half marathon. Many students saw me put in the effort and began encouraging me. Several started running with me. I began to run stronger, faster and could keep up with the students—even began to outpace a few. Running in the half marathon, I exceeded my goal by 18 seconds. I now have vibrant health and am preparing to run the full marathon in 2020. It was great fun training and running with all of the students.”

“Our students did better than ever before at meeting their goals,” said Hilliker. “Nearly everyone hit their target time within just a few minutes—and there were just as many people who beat their goal as were slightly behind it. I couldn’t be more proud of them.”