PCG members: In addition to PCG Signposts, sign-up for the members-only Friday Philadelphian weekly email newsletter! Click here or email news@pcog.org ✖
The Day I Didn’t Run the Marathon
Do you know where the finish line is?
By Jessica Brandon • May 9, 2019 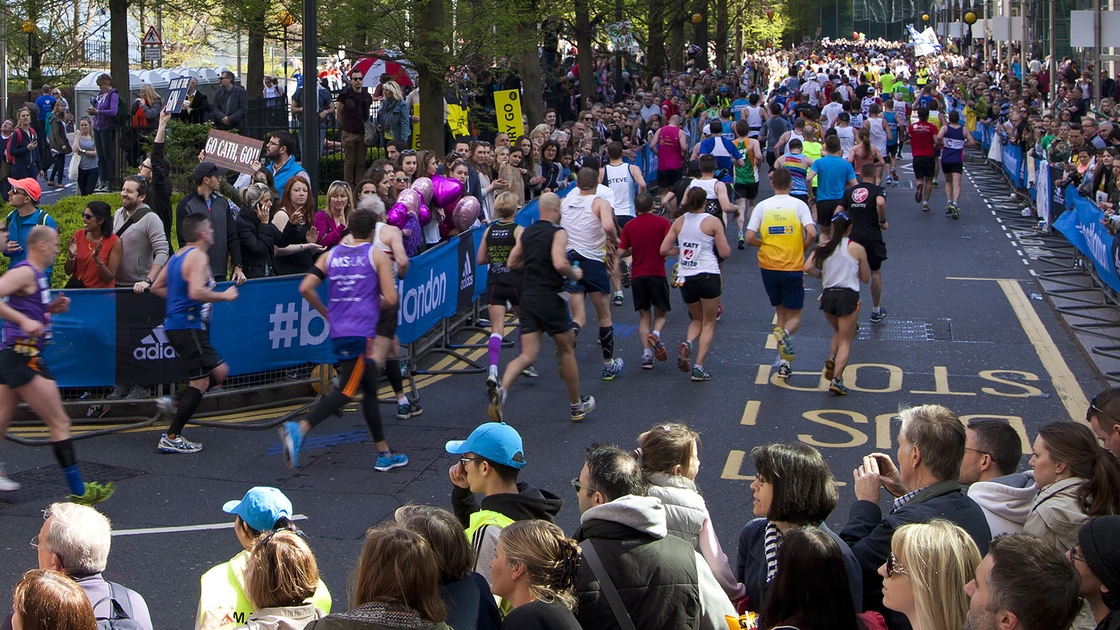 I had never seen this many people in my entire life.

Literally thousands of runners and fans filled the streets. Music blared from loudspeakers placed along the start line, which was several blocks long. The voices of announcers filled the air, directing runners of all ages dressed in a variety of colorful athletic wear as they sought to find their groups. Spotlights pierced the early-morning darkness, and the sound of news helicopters buzzing overhead added to the general hullaballoo. School bands played pump-up music as the crowd cheered along with them. It was an insane mass of noisy, colorful, energetic, excited humanity.

It was all a little overwhelming, really.

After the national anthem played, the announcer shouted that the race was about to begin. With the crack of the starting gun, they were off! First the wheelchair athletes, then the marathon, half marathon and relay runners, and then the 5K runners. I cheered and clapped along with everyone else, completely caught up in the excitement.

As the final stragglers ran past, the general noise level began to taper off a little. I looked around and saw that the crowd was beginning to thin out. Everyone else apparently knew exactly where to go.

This was when I realized that I had a problem.

Where is the finish line? I had no idea.

This was the 2016 Oklahoma City Memorial Marathon. I had signed up to run the half marathon—13.1 miles—and had been training for several months, but about a month before the race, I began to experience some health problems that caused me to decide it would be wiser not to run. I was a little bummed that I wouldn’t be able to experience the day with my friends as I had intended, so I decided that I would go along with them anyway and cheer them on from the sidelines. The fact that we were leaving from the John Amos Field House at a ridiculously early hour of the morning didn’t dissuade me a bit.

I had in my mind a picture of what the race would be like—the start line and the finish line would be at the same place; there would be a few hundred people there; I would see my friends start the race and cheer them through the finish as the morning sun shone down benevolently on the dignified, clapping crowd.

I was an 18-year-old girl alone in the middle of a city that I was unfamiliar with; I had no phone, so I couldn’t Google directions or call my dad, who is the next best thing to Google Maps if you need directions. And to top it all off, I was wearing a backpack that contained everyone’s valuables. We had arrived at the race later than we had expected, so many of my student friends didn’t have time to drop off their belongings at the gear check.

Without a thought about future complications, I cheerily volunteered—“I’ll carry them for you! You can just find me after the race.” One of the guys handed me his backpack, and everyone else handed me their wallets and jackets and phones, which I unceremoniously stuffed inside the backpack until it was impossible to fit another item.

Later, I became a little self-conscious about this backpack. The OKC Marathon is a Boston Marathon qualifier race, and the race organizers were still a little jittery after the Boston Marathon a couple years before. Security had been heightened, and there was a very visible police presence. I didn’t see anyone else carrying around a massive, suspicious-looking black backpack. Perhaps that—combined with my natural diffidence—was part of the reason why I hesitated to ask for directions from any of the volunteer race staff standing around. I’m pretty sure I was afraid that they would think I was a bomber or something.

The Herbert W. Armstrong College students who were running—and me, their lone cheerleader—had thought far enough ahead to establish a meeting place. We were going to meet at a coffee shop called Coffee Slingers, which was supposedly right next to the finish line. I looked around from my place at the starting line and realized very quickly that this was not the part of town where there would be a coffee shop.

In hindsight, I probably should have been more concerned. I had not planned ahead—at all—and neither had anyone else. But I didn’t freak out. Much.

With trepidation beginning to roil inside me a little, I looked around, hoping to see a friendly face. Suddenly, like a guardian angel, a sweet-looking older lady appeared next to me. She looked a lot less scary than everyone else who was around, so I struck up a conversation with her.

It turned out that one of her daughters was running the marathon. She was an OKC native, and she knew the city like the back of her hand. When I tentatively suggested that perhaps I might be a little lost, she said, “Oh, honey! I’ll take you to the finish line, no problem! I’m just heading that way myself, actually, so I can show you the way.” With that, this sweet older lady (whose name I never did get) started out across the street with me in tow.

We took the “scenic route,” since we had several hours to kill. She asked me a lot of questions about what college I went to, what we did there, etc, and in return, she told me about her family and her grandchildren. Periodically, she would interrupt the conversation by saying, “Oh, this place is wonderful—they serve the best Italian food.” Or, “Let’s just run up these steps, and I’ll show you this cool little rooftop restaurant up here.” She knew all the back ways around the city, all the special little spots that only someone really familiar with the area would know about.

And then, when we arrived at Coffee Slingers, she said, “Now, you order something, and I’ll pay for you.” When I began to protest, she said, “No, I insist.” So, she bought me coffee, and after we drank our cappuccinos, she sent me on my way to the finish line a block down the road. I never saw her again.

Looking back on this experience, I don’t think that finding this generous and helpful lady among the thousands and thousands who were at the race was an accident at all. I am sure that God either directed me to her or sent her my way, knowing that I was hopelessly lost. I should have planned ahead instead of jumping straight in without thinking. It didn’t even cross my mind that I had no idea where I was going or what I was doing—I just went and did it with a dangerously happy-go-lucky mindset. It probably wasn’t the wisest decision I have ever made in my life. I should have at least looked at a map.

Proverbs 13:16 says, “Every prudent man dealeth with knowledge …. “ The New Living Translation renders it this way: “Wise people think before they act.” My mistake in this situation was that I really didn’t think—at all. I jumped into a decision without considering any of the details.

In some ways, this is only a minor example, but the lesson has far-reaching consequences in every area of life. If we don’t plan ahead—if we don’t truly think before we act—we may end up getting into trouble. I think that God probably helped me out of this potentially dangerous situation by sending me someone who would safely direct me where I needed to go. God does take care of us, but He also expects us to learn to make smart decisions.

In hindsight, the situation I found myself in could have ended a lot worse than it did. I found a friendly, helpful lady; she directed me several miles through the city to the finish line; she even bought me coffee. I’m not the kind of person who usually makes on-the-fly decisions; I usually ruminate on them for a while, sorting out the pros and cons. But because going to the marathon was a natural outgrowth of something I had already been planning on doing—actually running the half marathon—I didn’t take the time to think about what the consequences of this new situation might be. I didn’t make a single plan. It didn’t even cross my mind that I might run into any trouble. I just didn’t think.

I know. Worst excuse in the world. But it’s true.

I may not have run the half marathon that day, but I did learn an important lesson that has stuck with me. Always think before you act. Plan ahead. If you don’t, there’s no guarantee you’ll find the finish line.