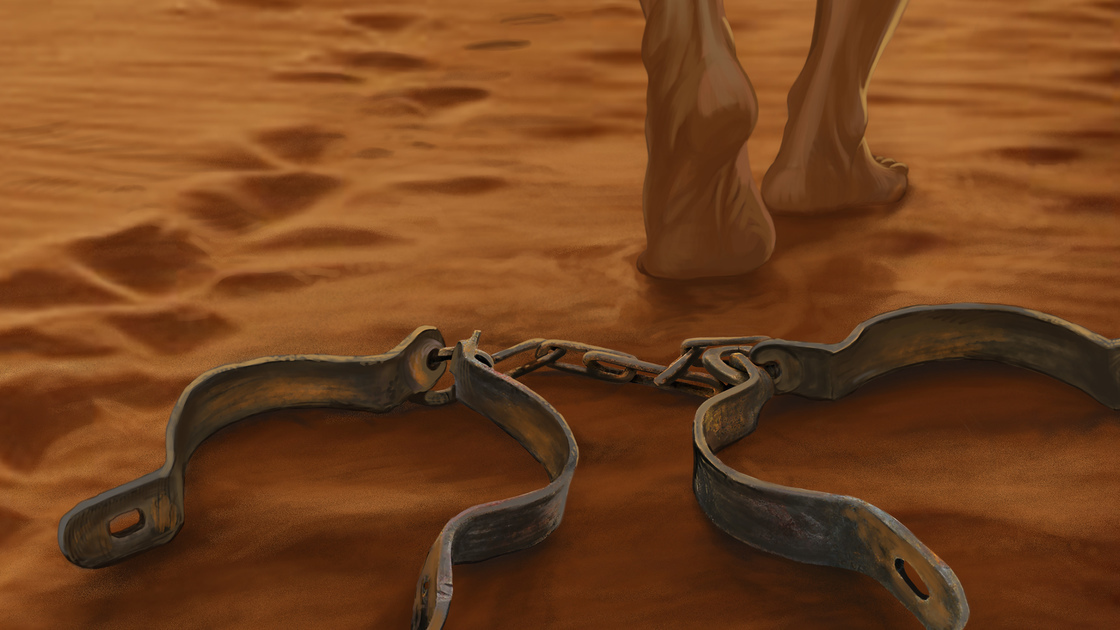 The Days of Unleavened Bread portray our deliverance out of slavery and bondage to sin, and God delivering us into true liberty.

People in America today talk about liberty and freedom. And while we do have physical freedom, it is not true freedom.

Those who talk about freedom are themselves in the worst kind of bondage.

Real liberty is what God offers us today. It’s not just for the firstfruits. There is a great, universe-size plan of liberation in God’s mind.

“For the earnest expectation of the creature [it should read, creation] waiteth for the manifestation of the sons of God” (Romans 8:19). All of God’s creation is waiting for the birth of the Family of God; it is groaning for that time (verses 22-23). God has called us to true liberty today—for a great purpose. He wants us to bring liberty to the entire universe.

My granddad was in the third wave of the D-Day invasion back in June 1944. He helped liberate Paris, eventually marching all the way into Berlin. While there, he helped to free prisoners from the concentration camps. He didn’t talk about the camps very often, because what he saw was so horrifying. He did, however, talk about what a thrill it was to liberate those people and to give them freedom from that horrific suffering.

What a thrill it will be for us to give this world liberty, releasing the chains of bondage and corruption that Satan has held it in. Eventually, we are going to help Jesus Christ bring true liberty to the entire universe.

But take note: You cannot help Jesus Christ bring freedom unless you yourself are free.

“For the [creation] was made subject to vanity [futility], not willingly, but by reason of him who hath subjected the same in hope” (verse 20). God has given us free moral agency. We have the freedom to choose. Lucifer had that freedom. The demons had that freedom. Because of free moral agency, angels and humans have the freedom to rebel—and both have! That is why the universe is in bondage to corruption. But there is hope! There is an amazing plan—and you are a major part of that plan!

“Because the [creation] itself also shall be delivered from the bondage of corruption into the glorious liberty of the children of God” (verse 21). We are going to help liberate this entire creation! That’s why we are here. God liberates us and removes those shackles of sin and corruption. Then He will use us to free the creation from the bondage of corruption and sin. This is the glorious liberty the children of God are bringing to the creation once they are born.

God has given us His Spirit, but we are just the firstfruits. He has a great plan to liberate all the universe. This vision is what we are focused on. That is why we are here. As the Passover pictures, Christ came to die for us and pay the price for our sin. But He also came to qualify to replace Satan and kick him off the throne of this Earth, starting a revolution. We are revolutionaries for Christ!

We are ambassadors for another government, another Kingdom (2 Corinthians 5:20; John 18:36). But we are not here to start a physical revolution against the nations. The present government of this Earth is about to be overthrown. That’s a spiritual revolution!

A new King is coming! We are called to prepare for that future, to help Jesus Christ bring a new government to this Earth. This requires us to have a revolutionary spirit. We must have a fire burning inside of us to be revolutionary in our thinking. We also must retain that fiery spirit as the battle heats up.

We cannot cower in fear because of persecution. This revolution is about overthrowing Satan’s tyrannical government that is holding people down in ignorance, corruption, pain, suffering and misery. This is a world held captive, and we are going to bring it true freedom—as pictured by the Days of Unleavened Bread.

“While they promise them liberty, they themselves are the servants of corruption: for of whom a man is overcome, of the same is he brought in bondage” (2 Peter 2:19). Politicians talk about freedom and liberty all the time, but what do they know about true liberty? Religionists talk about freedom from the law. Is that real freedom? So-called Christians say they are free because the burden of the law was nailed to the cross. God’s own lukewarm people today say they are free from oppressive government, but they are actually going deeper and deeper into captivity. These people talk about freedom while languishing in the worst kind of captivity. Even people who want to get out, in many cases, cannot. It’s as though they are locked in shackles, behind layers of iron bars. And they are held captive because there is no law or no government to enforce it.

God says His lukewarm people are like a dog turned to his own vomit! (verse 22). They have made a deliberate choice to turn from God and back to the filth of this world.

We all have free moral agency. We must make a choice. But though we are free to choose, that does not mean we are free from the consequences of those choices. Satan is right there waiting to put you in bondage. He promotes his sick lifestyle as liberty and freedom, but he is stealthily putting shackles on you. He will do everything he can to enslave us.

If you are to remain free of sin and free of Egypt, you have to stay away from this world and this world’s way of thinking.

We need to have the attitude of completely removing the leaven of sin from our lives! Why? Because “[a] little leaven leaveneth the whole lump” (Galatians 5:9).

But just like Pharaoh with his army, Satan is always lurking, trying to hinder us from obeying the truth. Yet the truth of God is what sets us free (John 8:32). If people try to bring leaven into our lives or hinder us, we need to cut them off! (Galatians 5:12). We must not be hindered.

We need to have the strong moral character of God. We must strive constantly to get leaven out of our lives and replace it with the unleavened bread of sincerity and truth. We have to live righteously and love God’s way of life, putting God’s way of life first in our minds.

“For, brethren, ye have been called unto liberty, only use not liberty for an occasion to the flesh, but by love serve one another” (Galatians 5:13). Do not use the freedom and liberty God has given us to fulfill the lust of the flesh. Instead, use what God has done for us to serve one another (verse 14). God’s way of life is the way of outgoing concern and love—first toward God, His Family and His Work.

We must be in control of ourselves, or else we can’t help Christ revolutionize this Earth. Pastor General Gerald Flurry once said, “You and I are in the business of turning people, and we will turn them in exactly the same proportion that we turn ourselves.” How much have you turned yourself? How much have you allowed God to turn you toward His law and His way of love?

In the February 1979 Worldwide News, Herbert W. Armstrong wrote, “It is Satan’s attitude that is his prime evil.” The difference between sin and righteousness, leaven and unleavened, is about an attitude of mind. These are two ways of thinking. We have to go deeper than just the action; we need to get to the root! What is at the heart and core? What is the motivation?

“[Satan] does not hunger and thirst for God’s righteousness,” continued Mr. Armstrong. “He harbors only the deep-rooted desire to do evil—to go contrary to God’s law of love and righteousness! He wanted to go as far as he could in the evil way contrary to God’s way. That was in his heart.” God’s law is a principle that has to be applied in every aspect of human conduct. God doesn’t have a laundry list of dos and don’ts. In fact, you can do something that is right, but if you’re doing it with the wrong attitude, even that can be sin!

We have to use the Spirit of God to apply this principle to every question, situation and circumstance.

First and foremost, God’s law—the opposite of sin—is an attitude of mind. God’s law is love; His mind is love, or outgoing, unselfish concern.

Satan got to Eve through her mind. In 1981, Mr. Armstrong wrote: “Sin, spiritually, is self-centeredness, self-exaltation, desire to be beautiful, vanity, coveting, desire to get and take, to exalt the self, jealousy and envy, competition, oft-resulting violence and war, resentment and rebellion against authority.

Spiritual sin is an attitude. Attitudes reside in the deepest recesses of our mind. What is our motivation? How do our minds work? This tells us a lot about whether we are really coming out of Egypt and receiving true liberty.

Notice what Mr. Armstrong wrote in a December 1980 Pastor General’s Report: “If you allow a bit of self-centeredness, vanity, covetousness, envy or jealousy, spirit of competition, or resentment of authority—especially that of the government of God in His Church—to enter your mind—if you begin to act on such impulse, you have already started in Satan’s way. For those attitudes and desires are ways of transgressing God’s law—of sin!”

We have to guard our minds very closely. That is where you win the battle against sin.

We have the promise of entering into God’s Family. We will enter into millennial rest, where we can free the world from bondage. To be prepared for such a job we must allow the unleavened bread of God’s Word to cut deep, “dividing asunder of soul and spirit, and of the joints and marrow” (Hebrews 4:12). Let it cut right into the deepest recesses of your mind. What is motivating your actions, thoughts and words? If it is not love, get rid of it because it is sin. If you want to get rid of sin, you need to let God’s Word and the Spirit of God discern the thoughts and the motives behind what you think, do and say.

Soon, we are going to help Christ silence the ignorance of this foolish world (1 Peter 2:15).

“Live as free men, yet without using your freedom as a pretext of evil; but live as servants of God” (verse 16; Revised Standard Version). God has given us true liberty. He has brought us out of bondage in spiritual Egypt. That freedom must not be used for selfish purposes. It is to be used to serve God and fulfill His purpose.

Satan has deceived this world into thinking it is free, but in reality, it is being held in the cruelest bondage. We have true liberty and true freedom, and we can bring that to this world with and under Jesus Christ. That’s what we are preparing for today. That is why we are here! Thank God and Jesus Christ that we have been delivered from Egypt and slavery. We have been given true liberty in order to serve God and to help fulfill His plan. Of course, in turn, He serves us in greater ways than we could ever serve Him.