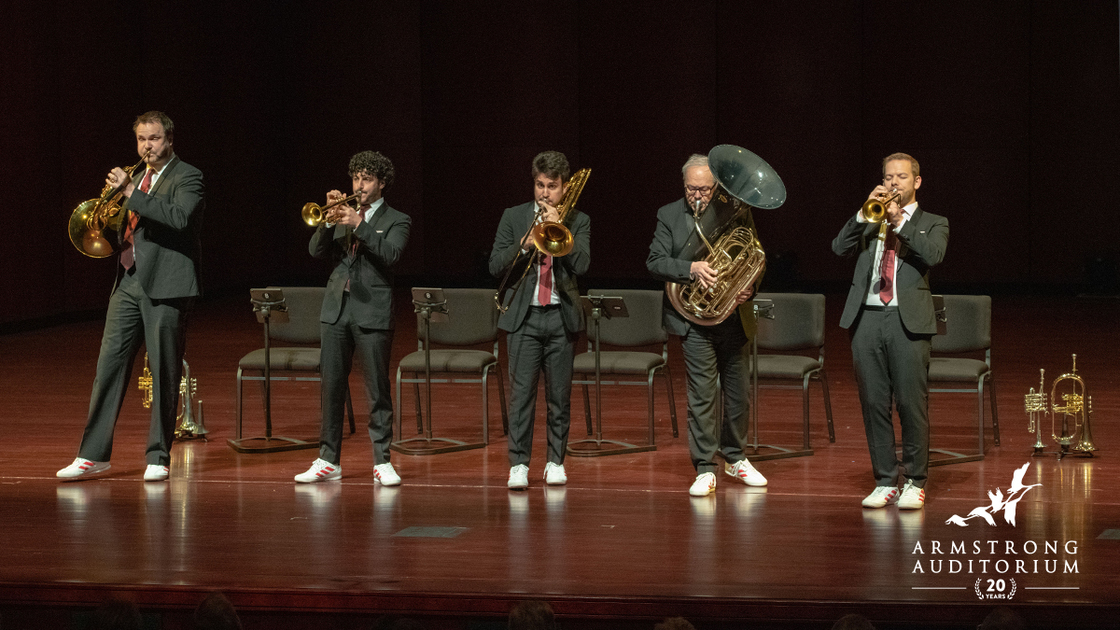 EDMOND—The Armstrong International Cultural Foundation concluded its 2018-2019 season on April 2 with a performance by the Canadian Brass for 693 concert-goers as well as those watching online at live.ArmstrongAuditorium.org. It was the fifth time the foundation has hosted the group.

The ensemble, which plays 24-karat gold-plated instruments, consists of tubist Chuck Daellenbach, trumpeters Caleb Hudson and Chris Coletti, hornist Jeff Nelson and trombonist Achilles Liarmakopoulos. Daellenbach, who has been with the Canadian Brass since its inception in 1970, is the group’s leader and last remaining original member.

The quintet entered the theater through its back doors, playing their first piece of music as they walked down the aisles toward the stage. Throughout the evening, Daellenbach introduced the pieces and cracked jokes, resulting in laughter from the audience.

The program included Handel’s “Arrival of Queen of Sheba,” an arrangement of Schumann’s “Carvinal,” and DaCosta’s “Tuba Tiger Rag.” Some of the selections included lyrics sang by some of the members of the group, some were in the classical tradition, and some were from the swing era. One was a piece specifically written for the group by film composer Michael Kamen, titled “Quintet.”

Daellenbach provided extra entertainment and levity with various tuba tricks. He continued to play the tuba while rotating it 360 degrees around his face, putting it between his legs, and once pretending to toss it out to the audience. While trying to get the lowest possible note out of the instrument, he crouched lower and lower until he could no longer produce a sound. With each trick, the audience erupted in laughter.

Following the final piece, the group received a standing ovation that brought them back out for an encore: “Flight of the Bumble Bee.” Afterward, the five performers met, took photos with, and signed autographs for concert-goers in the auditorium lobby.

The concert was also a highlight for its staff members. Beforehand, the staff, which mostly consists of Herbert W. Armstrong College students, gathered in the auditorium’s lobby, and house manager Shane Granger presented leather portfolios to acknowledge the service of students who were working their last concert.

The 2019-2020 season has now been announced. To view which performers are coming to Armstrong Auditorium in 2019-2020 and to purchase tickets, please visit ArmstrongAuditorium.org.