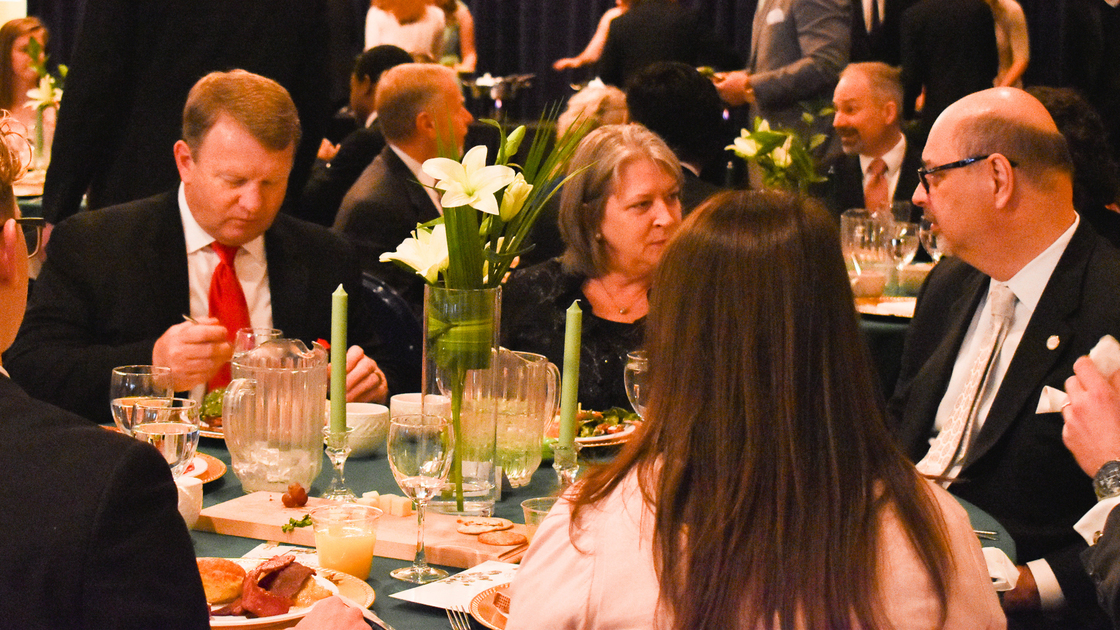 EDMOND—Herbert W. Armstrong College held its 17th annual speech banquet on February 17 with 64 students and about 25 faculty members, including Chancellor Gerald Flurry, in Edmond and 15 students and several faculty members at the college’s sister campus in Edstone, England.

The event was organized by sophomores Gianni Welsh and Emma Moore, along with the rest of the class. Preparation began two to three weeks prior to the day of the event. Welsh and Moore chose the theme “Plant the Heavens” (Isaiah 51:16).

Welsh said the opportunity to organize this event reinforced to him the importance of giving a project maximum effort.

“Really go for it and see how God will bless you if you truly devote yourself to the opportunity,” he said.

The live link with Edstone proved problematic at first, so the schedule of events was spontaneously adjusted. While they waited, guests ate and conversed. Speech instructor Dwight Falk shared a few remarks about the Herbert W. Armstrong College speech program, then introduced the first six speakers.

Freshman Zechariah Henderson gave a speech titled “A Chronicle of Cutlery,” a humorous inform speech of the history of the fork. Welsh followed Henderson with an inform speech titled “Pillars of Life,” which likened the pressures at college to producing growth of character similar to the growth process of the giant sequoia tree. Junior Brett Roberts’s speech, “Birgitta Knight,” told the story of a senior member in England who’s adventures in life could be compared to those of a knight. Freshman Rufaro Manyepa delivered “Forget Me Not,” sharing his personal experience with his grandmother’s alzheimer’s disease.

The next speech, streamed from Edstone and given by senior Kassandra Verbout, was “The World of the Deaf,” which informed the audience about daily struggles deaf individuals face and included sign language. From Edmond, junior Tony Seme followed with “Rise Up Again,” sharing lessons that he learned from breaking his leg during a flag-football game. He admonished his audience with Proverbs 24:16: “For a just man falleth seven times, and riseth up again.”

Following a break for parfaits, muffins and beverages, Falk introduced the final three speeches. Sophomore Emma Moore gave a heart-to-heart speech, “The Unopened Gift,” emphasizing the importance of taking the time to know those around you while you have the opportunity. Senior Brianna Weeks gave a heart-to-heart drawing a lesson from each of her years at college and comparing them to the sculpture Swans in Flight in “My Flight With God.” Senior Justice Brown then delivered “A Wonderful Tomorrow,” telling the story of a child who suffers from muscular dystrophy but still pursues her passion for painting. He encouraged the audience to overcome obstacles and make the most of the education they are receiving so that they can help give that young girl a wonderful tomorrow.

The event concluded with Falk giving a toast admonishing the students to fertilize the seeds planted by the speakers and help them grow until they can be used to plant the heavens.