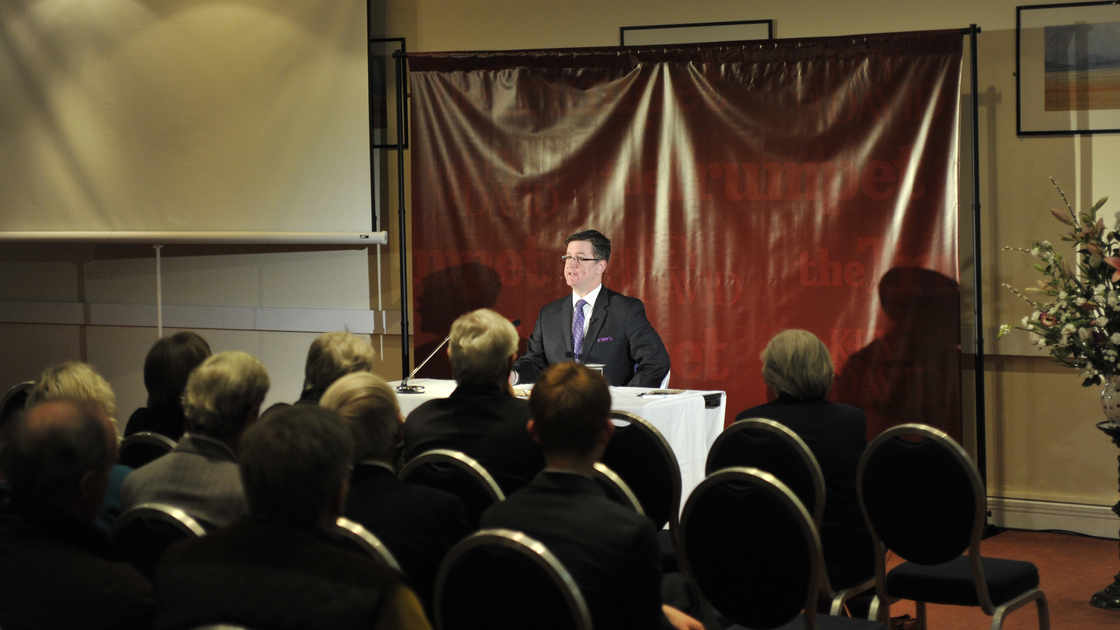 The Philadelphia Church of God’s United Kingdom-Europe regional office staff sent an invitation letter and two reminders to Trumpet subscribers in the area and also advertised in newspapers, with an ad featuring He Was Right and the Trumpet in the Nov. 11, 2018, Telegraph’s Sunday Life. An ad in the Friday edition of the Belfast Telegraph featured The United States and Britain in Prophecy, theTrumpet, He Was Right and The Plain Truth About Christmas. The staff also advertised the event online.

The Trumpet has about 400 subscribers in Ireland. More than 100 individuals registered for the campaign, with 63 percent following through and attending.

A total of 48 attended the Saturday evening lecture, including 17 Church members, eight of whom were regional office staff. Evangelist Stephen Flurry presented the evening’s lecture, focusing on following in the steps of Herbert W. Armstrong. Mr. Flurry noted the 33rd anniversary of Mr. Armstrong’s death and tied it to the Church’s distribution of the first mailing of 921 copies of Malachi’s Message, four years after his death, on Jan. 16, 1990. Mr. Flurry then referenced Matthew 17:10-11, Jesus Christ’s prophecy of an end-time type of Elijah who would restore all things to the Church, then 2 Thessalonians 2, which prophesied the falling away of the Church after Mr. Armstrong’s death.

A total of 12 individuals signed up for the follow-up Bible study.

“It was good and I enjoyed it,” one guest said. “Especially regarding Herbert W. Armstrong being the last Elijah, which I never realized or never thought about that.”

Another guest had met Mr. Armstrong in 1967 at the Belfast International Airport following a campaign Mr. Armstrong had conducted in the area.

Another guest said of the Trumpet magazine, “[Y]ou can’t buy books like this in the shop …. It just opens your eyes to everything about the Bible prophesies and what you read about in the Bible years ago you can actually see it happen.”

Another guest said, “The Trumpet magazine to me is the most informative of them all. You’ve got great writers.”

The Trumpet continued its campaign series on February 24, with Mr. Flurry hosting a live online appearance campaign at theTrumpet.com. The next in-person campaign is March 16–17 in Glasgow, Scotland.