God’s Insight
Fuel your excitement for inhabiting the universe!
By Darren Verbout • Feb. 26, 2019 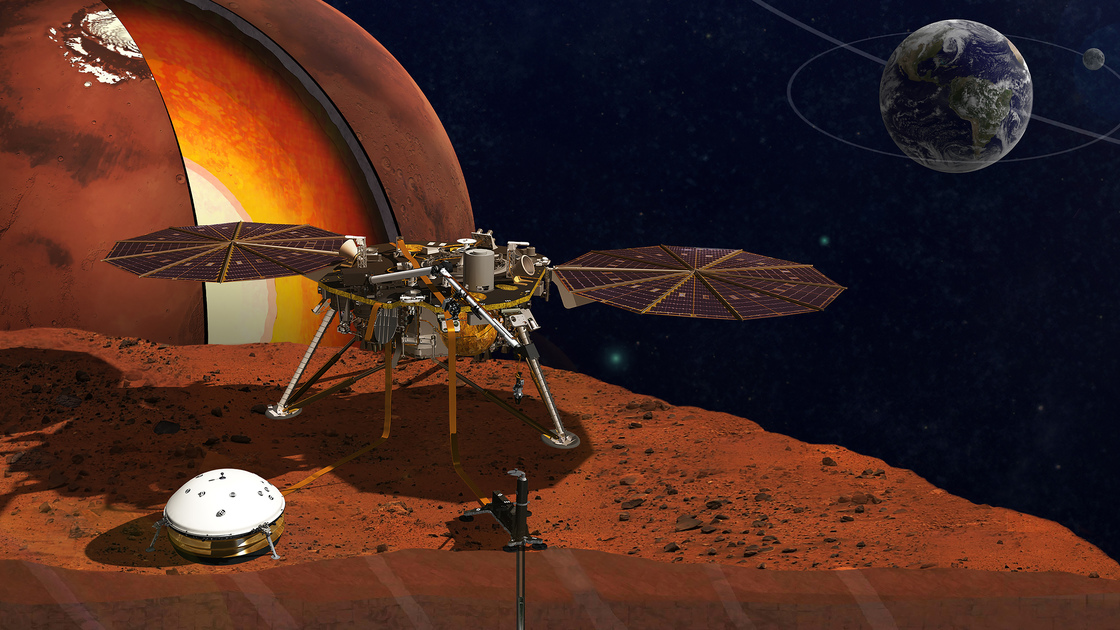 Could you hit a golf ball from Washington State all the way to Australia—and have it land right in the hole you were aiming for? That is how Ed Weiler, the former associate administrator for the Science Mission Directorate, described the Phoenix Mars Lander’s touchdown on the surface of Mars in 2008. According to nasa, the Phoenix was sent to Mars to study “Martian ice, soil and atmosphere.”

On Nov. 26, 2018, another man-made probe touched down on the surface of Mars: nasa’s InSight Mars Lander. According to nasa, InSight will study Mars’s interior to figure out how big and warm the core is, and it will study seismic activity to see how “tectonically active Mars is today.”

A video of the scientists’ reaction to InSight’s successful landing shows that they were ecstatic. They jumped up, cheered, gave each other high-fives, and did special choreographed handshakes.

But what was missing from all of the celebration? God—the Creator of Mars!

Scientists become experts at God’s physical laws. They learn the rules, and they must follow them or their missions will crash and burn. Yet when they do successfully complete a mission in space, they congratulate themselves. They talk about how finely tuned their missions are, but they don’t highlight the God who created all of the fine tuning.

Their feats are astounding, but something even more astounding is what the scientists don’t see—and what you do see: the Creator of the universe. In God’s Church, we know the truth about the universe. We know so much more than these scientists in that sense. As awesome as the InSight mission to Mars is, God’s insight, which He gives to His Church, is infinitely better.

For instance, InSight was launched on May 5, 2018, which was the anniversary of God revealing to His Church through Pastor General Gerald Flurry that mankind had entered into the last hour. God gave us a lot of insight on May 5, 2001!

One of the definitions of “insight” is “a deep understanding of a person or thing.” We have the mysteries and secrets of God. We can deeply understand these things because of the insight God has given us.

These nasa engineers and scientists see and understand details about the physical universe because God is allowing them to (Romans 1:19). He is sharing His creative genius with us. And as verse 20 goes on to say, these nasa scientists should know that there is a Creator because of the brilliant universe they study so carefully! They don’t have an excuse to leave God out of their work—but they do anyway.

Because we keep God as the center of our lives, God gives us insight that these scientists don’t have. Man wants to know more about the heart of Mars than he does about his own human heart. But God has given us insight about both!

One of Satan’s biggest schemes is to get man to worship the creation rather than the Creator. But to truly understand creation, we must go to the Creator—or else we are missing the point.

As the smartest people on Earth look for life on other planets and study the heartbeats of God’s creation, God is telling us that the age of man is coming to an end. Unless we have God and His timetable in mind, everything else in this world or on other planets doesn’t really matter.

These scientists fail to retain God in their knowledge, and as a result, “God gave them over to a reprobate mind, to do those things which are not convenient” (verse 28). Wisdom comes from God, and if you leave God out of the equation, all you are left with is foolishness (verse 22).

Lucifer and one third of the angels failed to retain God in their knowledge as well, and as a result, the entire universe was thrown into a state of waste and decay (Genesis 1:2). nasa doesn’t know why the moon and Mars are pockmarked and desolate. We do! We know about Lucifer’s rebellion and the war in heaven. That is God’s insight!

Romans 8:22 says, “For we know that the whole creation groaneth and travaileth in pain together until now.” Today, the universe, Earth and mankind groan. God allows the Earth to groan with wildfires, hurricanes and earthquakes.

Verse 23 continues, “And not only they, but ourselves also, which have the firstfruits of the Spirit, even we ourselves groan within ourselves, waiting for the adoption, to wit, the redemption of our body.”

All creation groans in calamity, but we groan differently. We pray. We groan and pray with the Holy Spirit, as it says in verse 23. Young people, it is God’s Holy Spirit working with and eventually in you that will give you the only insight that really matters!

God’s creation isn’t waiting for nasa scientists and engineers. It’s waiting for you! It’s waiting for sons that love keeping God in the middle of their conversation—for sons who love putting the focus back on the Creator more than the creation. nasa and the rest of mankind will have their opportunity too, but today, the creation “waiteth for the manifestation of the sons of God” (verse 19).

As Lesson 8 of the Herbert W. Armstrong College Bible Correspondence Course says, “We are to become the supreme masterpiece of all His works of creation—individuals who will be capable of righteously exercising the awesome powers of God!”

nasa might know a lot more about the physical and technical details of space than we do—for now—but we know the most important detail: who created it. We know the Creator’s master plan, and we know that once we are born into His Family, we won’t need landers and other scientific instruments to understand how planets are put together. We will see with our spiritual eyes right through the crust and into the core. We will help God liberate the physical planets like He has liberated us spiritually (verse 21).

Recently, Elon Musk said humans could colonize Mars as early as 2025. From all indication, God does intend on populating Mars and other planets throughout the universe—with future members of the Family of God.

nasa’s missions into space today are exciting, but they are nothing compared to your future in space. Use events like the landing of InSight on Mars to fuel your excitement for studying God’s creation and His plan for it and you in the future. You have access to God’s insight. Use it!