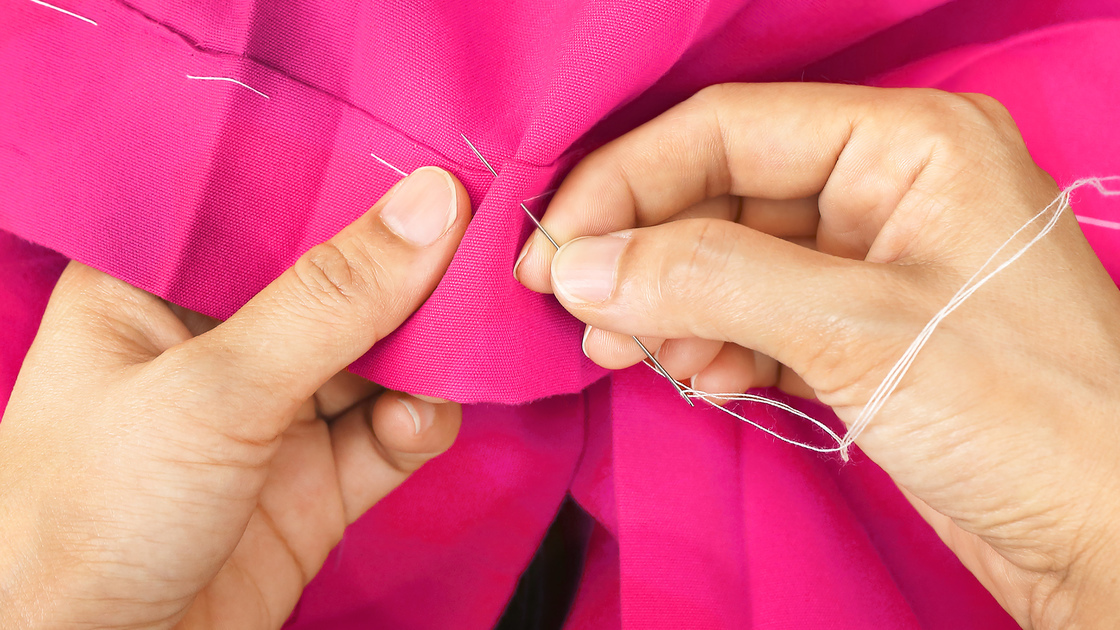 Often, children take up a hobby in a burst of inspiration—as soon as they discover it exists. It may be playing a sport, learning to bake, painting, and the list goes on, but the second a child is inspired, he wants to start doing that hobby immediately.

For me, that hobby was sewing.

I was about fifteen minutes into watching a film set in the Medieval Age. I couldn’t help but admire the clothes they were wearing. All the clothing must have been hand-stitched back then! As I saw the different patterns and outfits of the Middle Ages appear on screen, I wanted to wear the exact same thing. The clothing looked warm and comfortable—stuff I could run around in outside, just like any other rambunctious ten-year old.

As I continued to appreciate the centuries-old clothing, I realized that I had a bobbin of thread and a silver needle in a drawer in the laundry room. On the shelf a couple feet away from that, there were yards and yards of bright fuchsia fabric, neatly folded and waiting to be used.

It was less than a minute before I made my final decision. I was going to hand stitch a medieval tunic—something fit for a princess—and it was going to be beautiful!

In no time, I found the bobbin with bright pink thread tightly wrapped around it. The sharp silver needle stuck out like a sore thumb in the drawer. I also found an extraordinarily large pair of scissors; they were three times the size of my hand! They seemed capable of cutting through the thickest fabric. And, of course, I grabbed the fabric on my way.

Since this was the first time I had ever sewn anything, I had no idea what I was doing. I decided the best way to measure out the fabric was to lie down and trace the outline of my body. The permanent marker bled through the fabric and gave up about halfway through, so I had to estimate the rest. The big scissors that I thought would cut through anything kept getting bunched up within the fabric, causing uneven edges.

After getting my fabric ready, I prepared the needle by tying the thread into a triple-knot around the needle’s eye—to make sure it wouldn’t get loose, of course. When I began to sew, I realized that the knot kept getting stuck inside the fabric. My solution was to make the width between each stitch about two inches long.

As I worked, the fuchsia fabric wrinkled over my lap and spilled onto my bed. I finally made the last stitch in my tunic—less than an hour later. I studied my work carefully and came to a conclusion: It was perfect. I failed to notice the rough edges and the uneven neckline. The sleeve that turned out to be too small for my arm went unnoticed as well. I was too proud of my work to notice any flaws.

It wasn’t until the next day, when I proudly showed my work off to my family, that all the imperfections were pointed out. I was taken aback. I thought this was the greatest piece of clothing ever created. How could anyone see blemishes in my work? I was distressed over it. For a moment, I thought I would never sew anything again. If the first thing I sewed was terrible, the rest would just follow.

But as I stared down at the bright pink fabric, I realized something. I didn’t want to stop sewing. I really enjoyed it. I loved the feeling of excitement that came with every stitch. Seeing the fabric come together and look almost wearable delighted me. Was I really going to let some constructive criticism make me put the needle and thread down forever?

I did not realize it at first, but it was not the constructive criticism that brought me down. It was my attitude toward it. I believed that I could master a skill like sewing much more quickly than I actually could. I thought I was a professional, but I was still only a beginner. It doesn’t take a day for any beginner to master a ballet step, a piano solo, a golf club swing or anything else. To progress in a hobby, it takes time and practice.

I began to slow down my sewing pace, paying attention to every detail instead of trading time with sloppiness. I wasn’t as stressed out over whether or not the clothing I was working on would be perfect or not. What mattered now was the attention I was giving to detail. Instead of rushed, halfhearted effort and sloppy pieces of clothing, I now took my time and had well-made clothes that I could actually wear and appreciate as a result. That fuchsia tunic stayed in my sewing drawer as a reminder to always give my hobby the time it deserved.