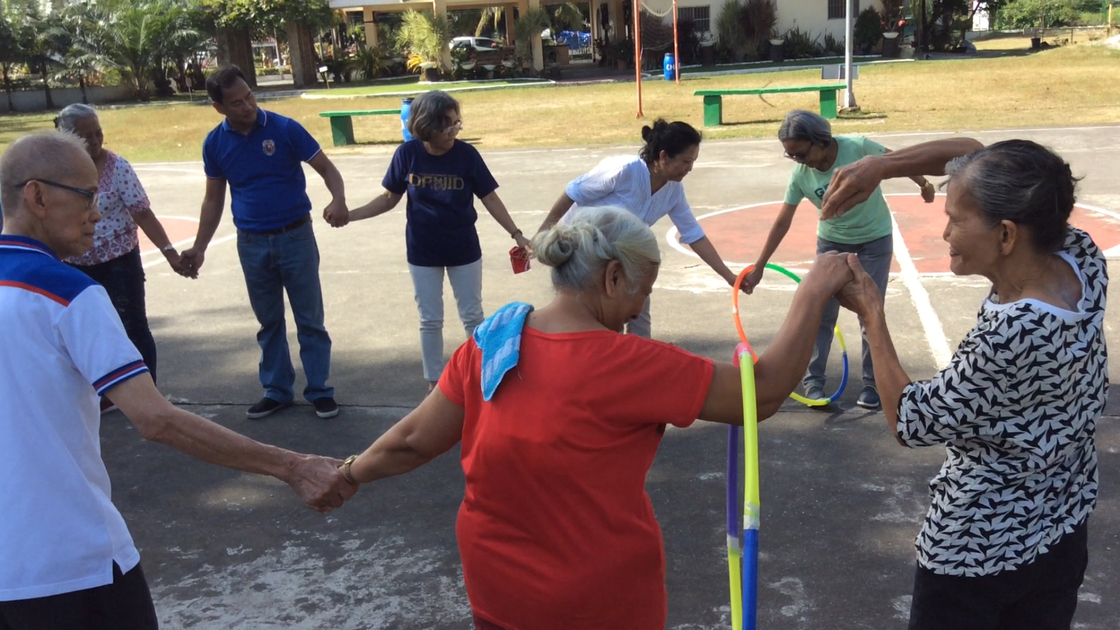 Families with children, teens and seniors all played together in various games that required team work, communication, problem solving, patience and balance.

The games were divided into 3 categories: group relay games (such as “Wheel You Barrow Me,” “Spell My Body,” “Simon Says With a Twist”), food-related games (such as “The Cookie Challenge,” “Boiled Corn Eating,” “Juice Drinking”) and traditional Philippine games (“Sipa,” “Patintero,” “Lastiko,” and “Chinese Garter,” to name a few).*

Everyone was willing and enthusiastic to participate in the games. The traditional Filipino games proved to be the highlight for everyone.

Teens and pre-teens were engrossed with Patintero, which is a fast-paced, challenging team game.

The ladies gathered around to play Chinese Garter. “It was reminiscent of my childhood days,” commented Quezon City member Lai Cruz.

The men enjoyed the challenge of playing Sipa. One father mentioned that he is going to teach his sons how to play, so they can play together when they get home.

“I love the game of Sipa,” said Angeles City member Erian Gallardo. “It’s my favorite. I’ll practice to be a better player.”

The game of Lastiko was appealing to everyone, especially the seniors.

Prizes were handed out during the games. A special prize for the Early Bird was awarded to a teen, Celeste.

After all the fun and games, everyone ate lunch together, followed by ice cream. During lunch, the children and some seniors played the Mystery Box Challenge. The children commented that it was the best family day activity they experienced.

The brethren look forward to the next family day activity.