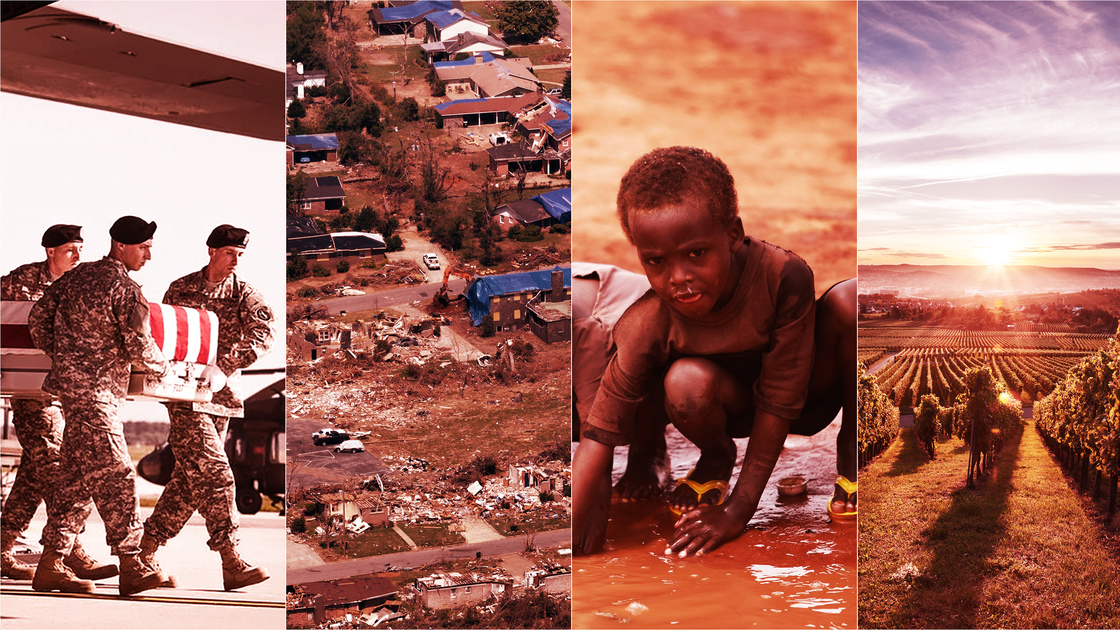 Have you ever proved whether the Bible is the authoritative Word of Almighty God? We can know, definitely, that the Bible’s revelations are true. Only the great God could have accurately predicted today’s news long ago!

Today’s startling headlines of world news were written in Bible prophecy long before they actually occurred. And tomorrow’s news has already been written in advance!

Most people would acknowledge that it was impossible for men over 2,500 years ago to have looked into the future and foretold what is now happening in all the major nations. Weather experts often fail in foretelling the weather just days in advance. What chance would anyone have of foretelling specific events to happen to great powers like the United States, Britain, the European Union, Russia or China and having the prophecies come true—unless they were divinely inspired?

Such prophecies were made centuries before they were fulfilled—and some are now being fulfilled precisely as the prophets foretold!

Fulfilled prophecy is proof of the existence of God Almighty. It is proof of the divine inspiration of the Bible. It is proof that the Bible contains knowledge revealed from God that we could not otherwise discover or know. Isn’t it rational and even logical, then, to believe in the God who made His revelation known thousands of years in advance?

Some people think that the only way to prove the inspiration of the Bible is by means of Jesus’s miracles. But the skeptics do not believe those miracles ever happened—even though the historical testimony of unconverted Jews and pagans admit that Jesus did perform those miracles.

Others think of answered prayer as the major proof of inspiration. But the skeptic has had no prayers answered. He does not believe that anybody else has either, and attributes any such claims to coincidence or circumstance.

Yet here is a book—the Holy Bible—that taunts the skeptics by daring to foretell within its pages the future history of this world. God dares us to look within its pages and prove its undeniable inspiration by the one source of irrefutable proof—fulfilled prophecy!

Prophecy is the one proof upon which Scripture stands or falls. Here is what God says: “Set forth your case, says the Lord; bring your proofs, says the King of Jacob. [A]nd tell us what is to happen. Tell us the former things, what they are, that we may consider them, that we may know their outcome; or declare to us the things to come” (Isaiah 41:21-22; Revised Standard Version). God says, as it were, “Let’s hear your prophecies that we may see whether or not they turn out. Predict what is going to happen in the future, and let us see whether you can foretell. Can you make and unmake nations? Can you pronounce a sentence or a decree on a nation, and bring it to pass?”

If prophecies have not been fulfilled, then the skeptics would have proof that the Bible is a fraud. But prophecy has been fulfilled! Contrary to popular belief, the rise and fall of history’s great nations—including America and Britain—was prophesied by God in considerable detail in the pages of the Bible. In fact, an exciting, pulsating, vital third of the whole Bible is devoted to prophecy. And approximately 90 percent of all prophecy pertains to our time, now, in these last days.

Yes, fulfilled prophecy is the proof of divine revelation! If one, throughout the Bible, speaking and claiming to be God, can prophesy and tell what is going to happen in the future to our cities, our nations, our world-ruling empires; then if it actually happens in every case, without a miss, no sane mind can deny that God must have spoken it.

The most important pursuit of our lives should be to prove God’s existence and the inspiration of His written Word. Today, God is making His existence known to you by showing that His inspired Word—the Holy Bible—is absolutely dependable.

Sidebar: Message from the Editor

Many people love to discuss Bible prophecy today. But there is a missing dimension in all of those public discussions. There is a critical lack in their understanding.

The underlying thrust of all Bible prophecy is positive. It’s about the return of Jesus Christ. However, there are some very dark prophecies that precede Christ’s return. Even those prophecies contain God’s hope and love, but men refuse to understand.

The dark prophecies are designed by God to teach us that we must have God’s character. Man is dangerously incomplete. To understand that, all we have to do is observe what is happening in the world.

Mankind has refused to receive God’s direction. That rebellion has produced the evil world in which we live. That is why man is facing so many dark prophecies.

God sent an end-time Elijah, Herbert W. Armstrong, to restore all things (Matthew 17:10-11) to His Church and proclaim “all things” to this world. He did so for more than 50 years, but most people rejected the message. Today we proclaim the same message. Generally, men and women reject it. Shamefully, most of God’s own Church has rejected that message (Revelation 3:14-20).

Edward R. Murrow was probably America’s greatest news journalist ever. He tried to get the press to cover more serious subjects in order to prevent the news media from becoming a vast wasteland. He believed it was essential for the future of Britain and America. But he finally admitted that the press wouldn’t listen to him or anybody else!

This is the problem of all mankind, and that attitude is why we face the black prophecies. We bring them upon ourselves and then often blame God!

People love to discuss Bible prophecy, but they reject God’s view of His own prophecies! That is the missing dimension in Bible prophecy.

All of the dark prophecies could be changed immediately if we heeded God’s message. God allows the evil to continue until we repent. Then man can fulfill his potential in the God Family forever!