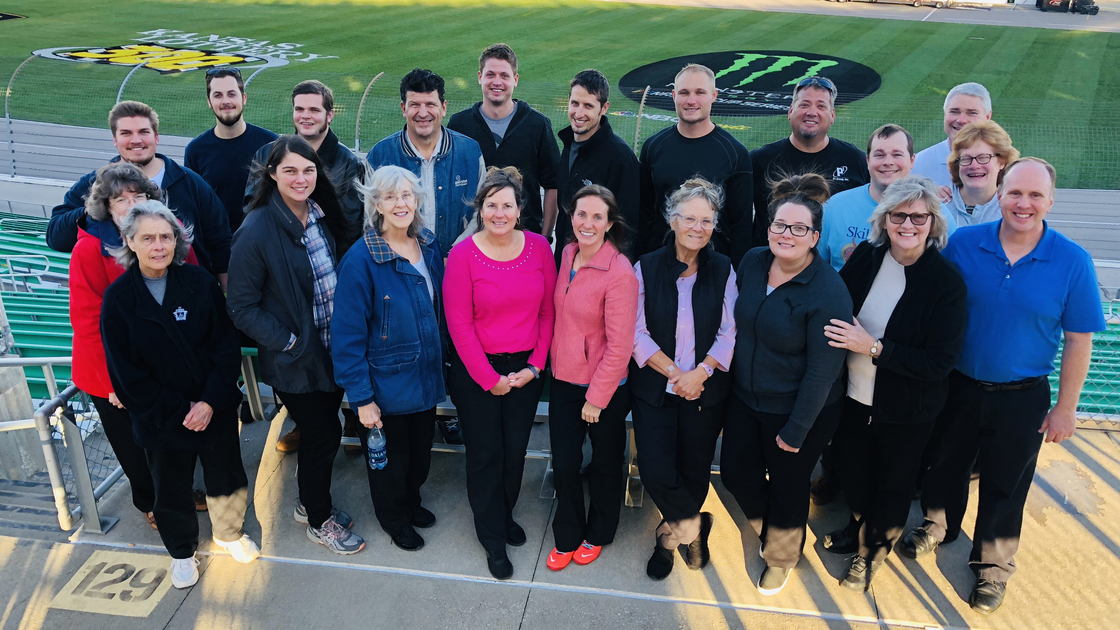 KANSAS—Twenty-five volunteers from five states met on Oct. 21, 2018, at the Kansas Speedway in Kansas City, Kansas, to raise funds for God’s Work by serving concessions and beverages to patrons from all over the United States.

The day began at 5:30 a.m. for pcg volunteers as they arrived at the speedway to gather for a prayer by Regional Director and Pastor Cal Culpepper. They then clocked in and were driven by bus to their concession stand to meet their supervisor and receive instructions. Preaching Elder Eric Anderson, assisted by Deacon Mark Arnfield, were responsible for managing the crew of volunteers, inventory and cash transactions throughout the day.

The majority of pcg volunteers were stationed in a concession stand that functioned as a veritable restaurant kitchen complete with grills, fryers, warmers, refrigerators and cashier kiosks. Once preparations began, it was not long before racegoers arrived and pcg volunteers were busy serving food and drinks.

The race car drivers were not the only ones with a need for speed during the day. pcg volunteers likewise worked with the nimbleness and precision of a pit crew to quickly and cooperatively man their stations and keep racegoers satisfied.

The kitchen required fast and effective communication to rapidly turn out orders and keep lines short. Sandwiches, sides, beers and sodas were served with smiles as the brethren rolled up their shirt sleeves and earned money for the Church’s aircraft fund.

A smaller group of volunteers were assigned to make cocktails from two beverage carts located across from the concessions stand. These were highly trafficked and proved consistent generators of tips for the fundraiser.

By the end of the day, the volunteers were physically weary but everyone left feeling spiritually rejuvenated.

“It was a lot of work, but I really enjoyed it,” said member Kate Greer who helped stock the condiment station and wash dishes throughout the day.

“I would serve at the Kansas Speedway if we were to have the opportunity again next year,” remarked Carol Aubrey.

Many prayers were answered as God blessed the day with favorable weather and safety.

The fundraiser cleared over $2,100 in profits and was the 11th and final speedway fundraiser held in Northeast Region.