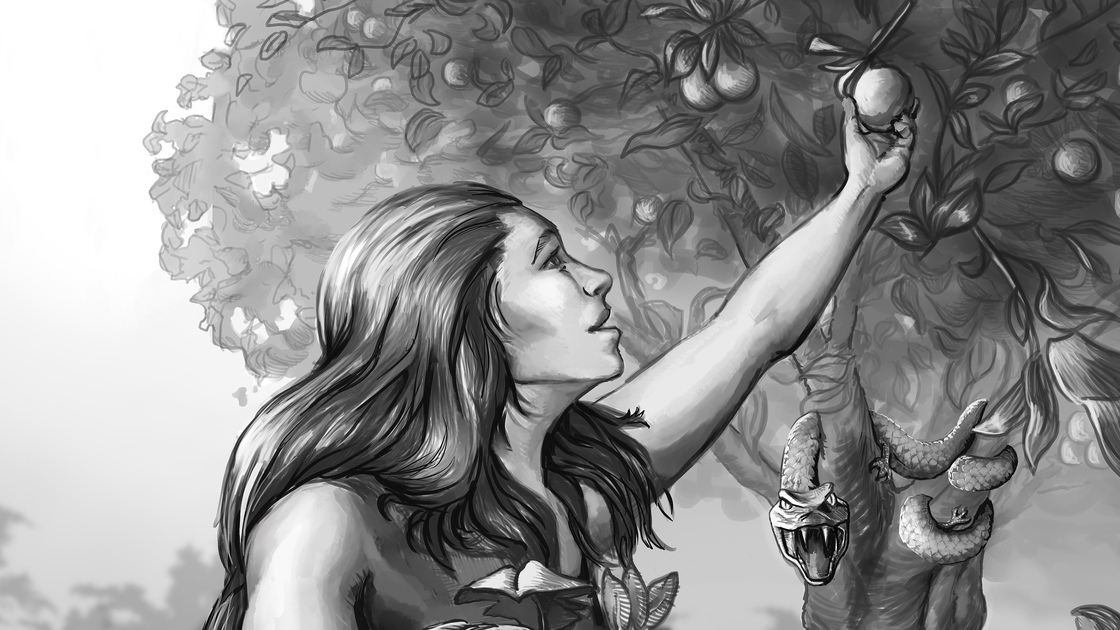 It is a remarkable characteristic of our society—perhaps of every society for the last 6,000 years—that God is rejected as the foundation of knowledge. If God commands something, mankind won’t do it. Often, even basic knowledge is summarily rejected. Herbert W. Armstrong related the following story in 1962:

“One little fellow, reared in the teachings and directions of God’s Instruction Book, was being asked by another 8-year-old neighbor boy why he didn’t observe Christmas.

“‘Besides,’ said the playmate, ‘the Bible tells us to celebrate Christmas.’

“‘Huh-uh!’ came the answer. ‘If the Bible told us to observe Christmas and have Christmas trees, then nobody would!’”

That same reasoning applies to the first lie.

In the Garden of Eden, the serpent told Eve that man would not surely die (Genesis 3:4). As you’ll see in this “Know Your Bible,” God revealed from the very beginning that man is a mortal soul and will grow old and die—and Adam and Eve rejected that revelation. Mankind has been rejecting that revelation in various forms ever since.

Adam was made from, and therefore composed of, earth—the dust of the ground!

2. After God had formed the man—made all the cells in his body—what did He do to give him physical life? Genesis 2:7.

God blew into the man’s lungs through the nostrils air containing oxygen—”the breath of life”—and the man began to live! Notice that the verse does not say God breathed an immortal soul into the man.

3. Does the same “breath of life” also pass through the nostrils of animals? Genesis 7:21-22. Is it therefore the breath of life that is cut off when a human being or an animal dies? Verses 22-23.

The source of physical life in man and all animals is the same. Not once does the “breath of life” even remotely refer to an “immortal soul” or life apart from the physical body. If it did, animals, birds and even insects—gnats, fleas, mosquitoes—would have immortal souls, for they all have the same “breath of life”!

4. After God breathed the breath of life into Adam’s nostrils, what did he become? Genesis 2:7, last part.

And so, man is a soul. Animals are souls too! The “soul” is merely physical life that is subject to death and decay. It is not immortal!

The soul is composed of the “dust of the ground”—it is material, not spiritual. It is matter. When man breathes, he is a “living soul.” When man ceases to breathe, he becomes a nonliving or dead soul.

Since man is a soul, and the soul is mortal, then man is mortal—subject to death. That is why the Scriptures refer to human beings as “mortal man.”

6. Was Adam subject to the penalty of death if he sinned? Genesis 2:17, last part. What would he become after death? Genesis 3:19. Was it the body only that would die, or was it the whole conscious man—”thou”—that would die? Same verse.

7. What one thing befalls both man and beast? Ecclesiastes 3:19. Is this because both have the same temporary source of life—the air we breathe? Same verse.

When an animal dies, it is dead. When man dies, he is completely dead, too. Both go to the grave, and all men and animals become dust once again.

The Hebrew word ruach, translated “spirit” in this verse, also means air, wind or breath. It is translated 27 times as “breath” in the King James Version. Three examples are Genesis 6:17, 7:15 and Lamentations 4:20. It is also translated 92 times as “wind.” Thus we can see that ruach has a very broad meaning and can be applied to a wide variety of things whose common denominator is invisibility. It may mean “attitude” as well as “spirit,” and with the word “holy” preceding, it means the Holy Spirit of God.

Since the same event—death—occurs to both man and beast, Solomon is asking: “Who knows whether a man’s ruach goes up or whether a beast’s goes downward?”

Although the same death befalls both, the Bible reveals that there is a vast difference between man and beast, as we will shortly see—and that difference does not have to do with any immortal soul.

10. After a person dies—becomes lifeless—does he still have a conscious existence apart from the body because of an immortal soul that existed within him? Ecclesiastes 9:5; Psalm 146:4.

12. Is the soul something that can be destroyed? Matthew 10:28. Then didn’t Jesus plainly show that the soul of man is not immortal? Let’s understand exactly what Jesus was talking about.

There are those who use this text to support the common belief of the immortality of the soul. Yet this verse plainly says the soul is something that can be destroyed in hell! Thus, whatever this “soul” is, it cannot be immortal!

In Matthew 10:28, the word soul refers to life that man cannot permanently destroy—but God can. What kind of life could this be? Obviously life that God restores by a resurrection!

Man cannot permanently destroy a life that God is able to renew by a resurrection. Although men may kill their physical bodies, said Jesus, true Christians know that men cannot take from them eternal life, which God has promised to give them at the resurrection. But God can permanently destroy all possibility of eternal life. How? By casting a physically resurrected person into the “lake of fire” to be utterly consumed—never to be resurrected again. This is the ultimate penalty of sin (Romans 6:23)—eternal death!

The book of Luke makes the meaning plainer: “But I will forewarn you whom ye shall fear: Fear him, which after he hath killed hath power to cast into hell …” (Luke 12:5). God not only has the power to take our present physical lives, but He also has the power to resurrect us and—if we have proved to be disobedient and incorrigible—to cast us into the lake of fire, from which there will be no future resurrection! (Revelation 20:14-15; 21:8).

This possibility of eternal destruction is a key reason why God made humankind mortal!

The Spirit in Man

The government of God ceased to be administered on Earth after the rebellion of the archangel Lucifer (now called Satan) and one third of the angels. Later, God created the first human, Adam, with the potential of qualifying to replace Satan as ruler of the Earth, and thus restore the government and way of God. But to qualify as successor to Satan, the human successor had to reject Satan’s “get” way, which was the foundation of Satan’s evil government, and choose God’s way of His law—the way of love (“give”), the basis of God’s government. Adam failed to qualify.

Jesus Christ—the “second Adam”—did qualify to reestablish the government of God on the Earth by overcoming Satan. Those who are to reign with Christ must also qualify during this mortal life by turning from and rejecting Satan’s way, overcoming that way daily, and actually living by God’s law of love.

We can now see that God chose to make man first out of physical matter instead of spirit for an important reason. Prior to the creation of man, He had made angels out of immortal spirit—not mortal flesh and blood, which is subject to death. One third of these angels sinned by rebelling against the government of God, but the punishment for sinning angels is not physical death.

1. Although man does not have an immortal soul within him that enables him to live on apart from his body after death (remember man is a mortal soul), does the Bible nevertheless speak of a “spirit in man”? Job 32:8, 18; Zechariah 12:1; 1 Corinthians 2:11.

Many passages of Scripture show that there is a “spirit” in man! This spirit is not the man—it is spirit essence that is in the man. Joined with the physical brain of the man, it forms the human mind. It imparts to man’s brain his unique powers of intellect and personality—the ability to think rationally and make free-will decisions. It imparts the ability to learn mathematics, languages or other types of knowledge such as music, art, carpentry, flying, etc.

But that is all. The spirit that is in man has no consciousness of itself. It is not an “immortal soul.”

2. Is this “spirit in man” clearly distinguished from the Holy Spirit of God? 1 Corinthians 2:11.

The human spirit enters every human being—and life begins—at conception, just as divine life starts by a spiritual conception when the Holy Spirit first enters a human (more about that later). The human spirit does not supply human life—the human life is in the physical blood, oxidized by the breath of life (Leviticus 17:11). However, the spirit in man does impart the power of intellect to the human brain. This nonphysical component in the human brain does not exist in the brain of animals.

This spirit acts, among other things, as a computer, adding to the brain psychic and intellectual power. Knowledge received in the brain through the eye, ear and the senses is immediately “programmed” into the spirit computer. All memory is stored in this spirit computer. This “computer” gives the brain instant recall of whatever portion of millions of bits of knowledge may be needed in the reasoning process. That is to say that memory is recorded in the human spirit, whether or not it also is recorded in the “gray matter” of the brain.

The human spirit is also the very means God has instilled to make possible a personal relationship between human man and divine God.

Animals also see, hear, smell, taste and feel, but what they perceive through their senses is not stored in the human spirit. There is no spirit in animals to cause their physical brains to function in the process of thinking, reasoning and acquiring knowledge.

3. Why has the truth about this “human” spirit in man not been understood by the world today? Revelation 12:9.

The devil has deceived the whole world on nearly every point of God’s truth! And the marvelous truth about the “spirit in man” is so important that Satan twisted and perverted it long ago. He clouded the minds of men and deceived them into believing a monstrous lie as far back as the time of Adam and Eve.

Here was the origin of the “immortality of the soul” teaching that is so prevalent today. Satan told Eve that she would “not surely die”—in other words, she had an “immortal soul” that would live forever. Eve swallowed this lie—hook, line and sinker. And most of the world today continues to believe some variation of that ancient lie!

Man also requires a second spirit—God’s Holy Spirit. Look for a “Know Your Bible”in the upcoming May 2019 issue of True Education to learn more about the Holy Spirit that must combine with your human spirit for you to reach your full human potential!