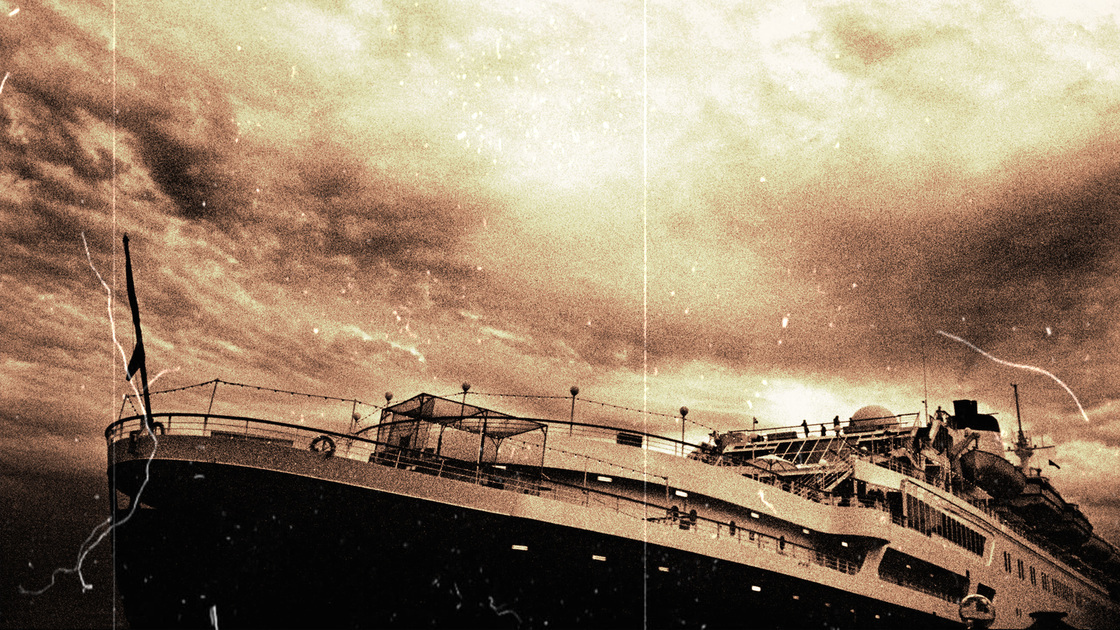 At the beginning of the Second World War, Germany ruled the seas with its submarines—called U-boats. It dared the Allies to attempt crossing the Atlantic. Many British and American ships were sunk as a result of German torpedoes ripping the hulls of their ships wide open, sending them to the bottom of the ocean.

As the war raged on, America inevitably entered the war, and the might of its naval power began to swing the tide of the battle of the seas.

In early January 1945, we received a report that a German sub had landed spies somewhere in Canada. Since our task force was already in the North Atlantic, we had orders to get that sub! All 12 ships swung into action.

During this mission, one of our main engines broke down. No ship with only one engine can face a German U-boat, so we were ordered back to New York, to our home port on Staten Island. We limped our way home on a clear and bitter-cold winter night with temperatures dipping to 15 degrees below zero Fahrenheit. While on my watch, I was able to see the sharp, trim, sleek, bow of our ship slicing its way through the icy waters of the North Atlantic.

When my watch was over, we were only about 24 hours out of New York. We usually slept with our uniforms on so we’d be ready if the captain called “general quarters.” But before going to bed I let down my guard: I took my trousers off and laid them over one of the rungs of the escape hatch ladder right next to my bunk. I fell asleep immediately.

But that was not the case.

I heard the sounds of men screaming in pain from injuries. A large cargo ship with 10,000 tons of sand in its bow had rammed into our crew’s quarters, slicing through the top bunks. This completely twisted shut the only way out of the crew’s quarters except for the escape hatch. One sailor had just left his bunk; he would have been cut in half had he stayed in it. I jumped out of bed into frigid water up to my knees.

I knew we were in trouble.

I went to assist those who were injured, but a chief petty officer was already on the scene and I was ordered topside. I only needed to be told that once. I climbed up the escape hatch ladder to forward deck.

As I looked up, all I could see was the menacing, gigantic bow of a ship jammed into the side of ours. It had to be at least five stories high.

I raced to the back part of the vessel, my bare feet sticking to the metal deck as I ran. I went into the galley and found some towels to wrap around my bare feet. I still had no pants on, as they had been knocked off the ladder and lost.

As the cargo ship slowly began to back out and disengage its bow from our vessel, the chilling waters of the North Atlantic began to fill its void. The forward portion of the ship began to sink, and two words no sailor ever wants to hear were ordered by the captain: “abandon ship!”

With the temperature at 15 below, life expectancy was not very long; it was thought a person would lose consciousness after four minutes in the water.

When the order is given to abandon ship, everyone has certain duties to perform. The cooks bring food; signal men bring communication gear; secret weapons (at that time, radar) were destroyed; some were assigned to release the chains that held the life rafts so that they would slide into the water.

We had practiced abandon-ship drills in the past, and everything always went smoothly. But we always practiced the drills in good weather—never in below-zero temperatures. As we prepared to abandon ship that cold January night, we found we were totally unprepared for what was to happen next. Only two life rafts released into the water, all of the other rafts were frozen solid and would not release!

There we were, 150 men and two life rafts. Needless to say, not one of us jumped into that icy, frigid water.

You are in a war too. The fact that you read this shows that you are striving to live God’s way. And, because of that, you face constant opposition. Your battle ground is the icy waters of this crazy, mixed-up society. Your enemies are your own human nature and the being behind the entire war, Satan the devil. He is very real—more subtle and deadly than any German U-boat.

As I learned on that cold night, lack of preparation can cost you your life! And the only way to survive in this evil world is with real preparation. How? The only way to be prepared is by having God in your life—living His way, according to His Ten Commandments.

Did you know that God offers many promises to young people for obedience to His laws? One being long life. In today’s society—with lives being snuffed out early by drugs, drive-by shootings, accidents, murders and even teenage suicide—that’s a promise most would like to have. Obedience to one of God’s laws—the Fifth Commandment, “Honor thy father and thy mother”—specifically offers this reward: “… that thy days may be long …” (Exodus 20:12).

Keeping God’s laws, always, will ensure that you are prepared when things get rough. It may even save your life. And God promises that it will give you long physical life.

Notice this proverb: “My son, forget not my law; but let thine heart keep my commandments: For length of days, and long life, and peace, shall they add to thee” (Proverbs 3:1-2). Proverbs 9:10-11 promise that “the years of your life shall be increased.” Many more scriptures show God promised long life for obedience to His laws. You can make a study of this yourself.

Do you care about living long? Do you want the promise of long life? Would you be ashamed or embarrassed if your friends found out that you are obeying God?

This world, and the young people in it, are heading for the worst time in history, when millions will be tortured and will lose their lives in what the Bible calls the Great Tribulation (Matthew 24:21). God has promised to protect those who obey Him from this end-time tribulation (Malachi 3:16-17).

Ecclesiastes 12:1 states, “Remember now the Creator in the days of thy youth, before the evil days come.” Much evil is about to be unleashed on this world, and God is pleading with young people to come out of this world, so He can spare them, so He can save their lives, so He can give them longer life. This great God wants to spare anyone who will obey Him. But time is running out; it is later than you think.

How you prepare yourself now will determine whether God spares YOU. But God doesn’t force anyone to obey Him. He has given humans free moral agency. He sets before us two choices and requires every one of us to make a choice. One is to obey Him and enjoy a long, peaceful life. The other is to go your own way, contrary to His laws, leaving Him out of the picture and taking your chances.

The choice is before you. Making the right choice will prepare you for what lies ahead in a society that will soon sink faster than the front of my ship did some 55 years ago.

All the men on my ship thought we were prepared for anything. When our captain shouted “Abandon ship!” on that cold winter night, we truthfully thought we were prepared. But our frozen life rafts brought us to the reality that we were totally unprepared. We could abandon ship if the weather was right. You could call us “fair-weather sailors.” We were not prepared as much as we thought, and it almost cost us our lives.

Thankfully, we were finally rescued by the same ship that rammed us. None of us lost our lives, although some did lose arms and legs.

The ship I was on did not sink all the way; the back portion stayed above water and it was towed backward into Rhode Island where it was patched up. It eventually was made “seaworthy” and was later used for fighting. I was not reassigned to that ship again but was ordered to serve aboard a destroyer escort and sent to the Pacific to join in the battle with Japan. But that’s a story for another time.

A fantastic future lies stretched out before you. You can be prepared for what is soon to come if you put your trust in this Almighty God. This God who put the sun in the sky and created the entire universe is able to bless you and to protect you from all the evil that will soon befall the Earth. The best way to be prepared is to obey God, and He will protect you. It’s entirely up to you; the choice is yours.