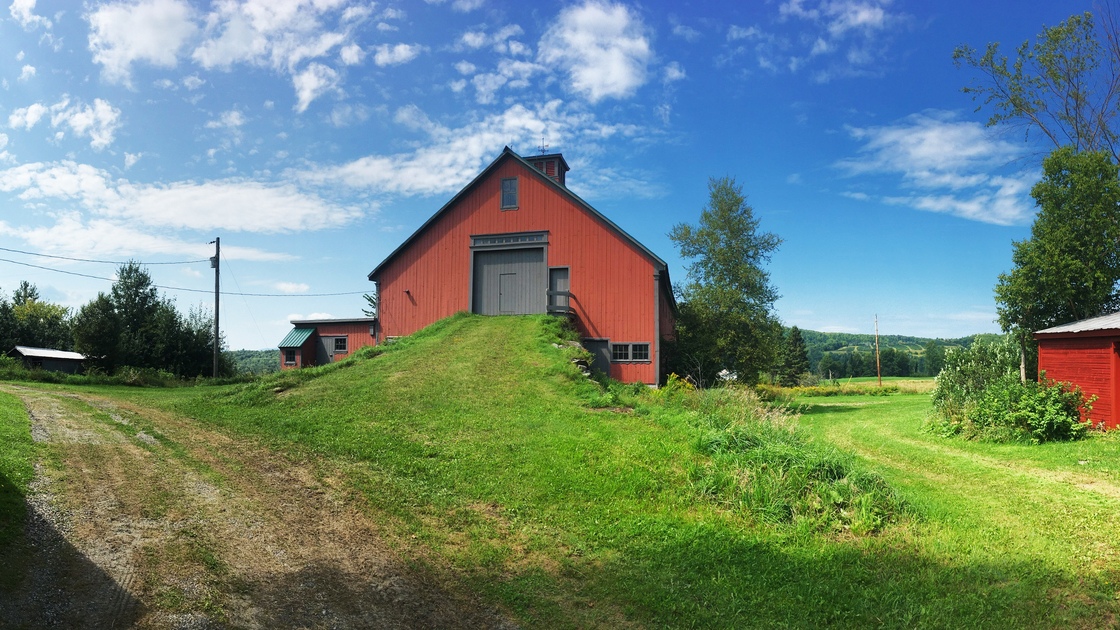 CANADA—Sunday, August 26, was a delightful summers day in Colebrook, New Hampshire, where approximately 25 brethren from the Ottawa and Montreal congregations in Canada met to visit and fellowship with the Rainvilles, who had recently celebrated their 50-year anniversary. Mrs. Carolyn Rainville is a member who, due to distance and health issues, is rarely able to attend services; when able she strives to attend the Montreal congregation, as New Hampshire, like Alaska, is under jurisdiction of the Canadian region.

The property of the Rainvilles is situated in the picturesque hills and farmland of New Hampshire and within half an hour of the border with Canada, so the visiting brethren had to make sure they had their passports on hand to cross the border and to return. The name of the area at the United States border crossing into Vermont is Canaan and another fascinating name seen on the Quebec side was the town of Magog.

Mr. Rainville, who is a supportive spouse, was very accommodating to the visitors in giving a tour of the historic barns on the property where he was born. He showed the brethren his milking and hay storage barn originally built in 1870.

A large stone-supported ramp going to the upper level made good use of horse-power in the laborious job of throwing hay into the barn. He also showed them around the milking bays, which could hold 35 cows at a time - half the total number of his milking cows.

After everyone had learned how he stored and cleaned the milk, he led the way to his potato shed, a real museum of artifacts! The potato shed was where he stored, cleaned, and sorted his potatoes. The ground floor of the shed was where the potatoes were first brought after being harvested—but the real action went on in the basement level. To get the potatoes down there, they were rolled down a ramp, the top of which was accessible to the outside of the shed. When the potatoes got down there, they were put on a machine, which (using electricity) automatically sorted and cleaned the potatoes, requiring less energy from the men. Mr. Rainville turned on the machine, as the dust rose it rattled into life and proved to be still in good working order. It was made of a system of rollers with metal points on them, placed so that the little potatoes would fall through the cracks into waiting buckets, while the bigger potatoes were scrubbed and jostled around.

To get the barrels of potatoes up and out of the shed, he created a pulley system, using weights to pull up the heavy barrels—but before he created it, they used to drive a truck through a sliding door into the shed, and would attach a rope to it, pulling the barrels up using “horse-power!” It was an amazing tour full of unusual and interesting memories, and the brethren were totally engrossed in his descriptions of farming life in his and his family’s past.

Member Mrs. Elise Kelsey commented that “it was like going back in time and it was good to see how other brethren lived.”

Mr. Rod Kelsey was impressed with how hard the previous generations worked.

After the tour, the brethren presented the Rainvilles with a few anniversary presents from the two congregations. A metal replica of a deer in a picture-frame, a 50th anniversary plate, an Armstrong Auditorium pen (with 2 replicas of the seals of Hezekiah and Isaiah), and a card completed their gifts.

Mrs. Rainville then served some vanilla ice cream (with maple syrup poured over it) to the brethren as a nice cool end to a beautiful day of enjoyable fellowship and instructional history. It then started to rain just as the brethren began to leave, waving goodbye to a very happy couple.

In a phone call a few days later, she told Preaching Elder Kirk Macdonald, who had organized the event, how the visit from the brethren “uplifted and inspired her and she was thankful everyone came.”

With the milestone of their 50 years of marriage, she told him that “marriage is a wonderful institution from God. He kept us alive and together. God calling me helped me to change, our marriage to survive and succeed, and for me to learn how to be a wife and mother.”