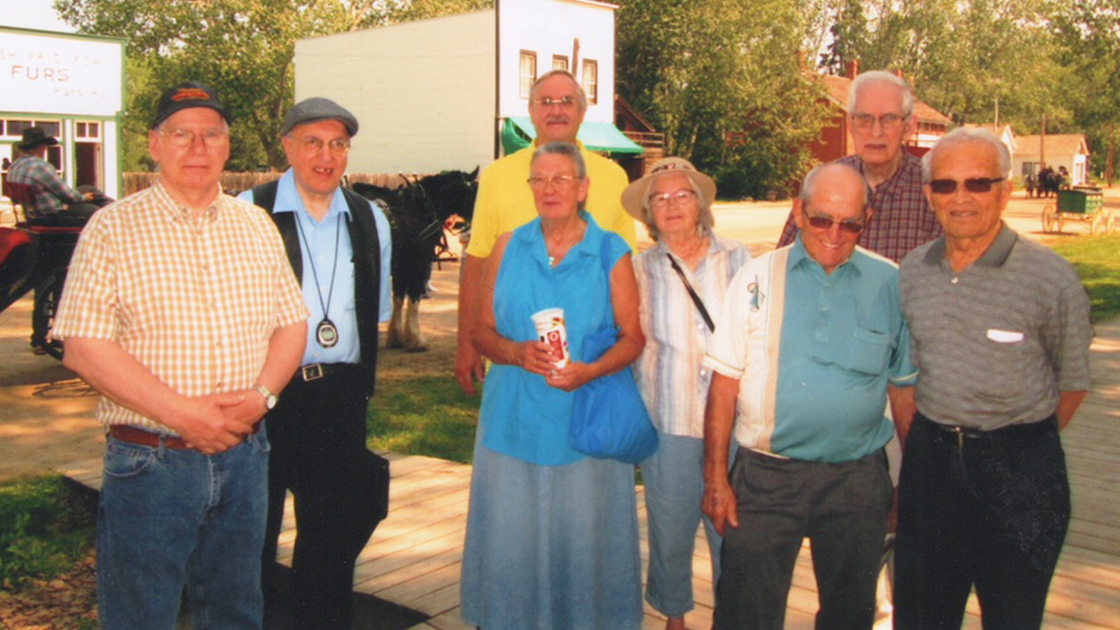 CANADA—On July 29, 10 seniors from the Edmonton, Alberta, congregation took an afternoon excursion into the past at Fort Edmonton Park. The event was organized by member Jerry Ozipko.

The fort, which is an exact replica of the original 1846 palisade fort that flanked the North Saskatchewan River and served as a pioneer Hudson’s Bay Company trading post, is just a small part of the massive park. Included within the 158-acre park complex are three streets, dating 1885, 1905 and 1920, which depict original and reconstructed buildings from those eras in the development of the city.

The seniors wandered through 1885 Street past a series of structures, including an old school, the original home of Edmonton’s first local newspaper, The Bulletin, an old Methodist Church (which just happened to feature a theatrical performance of a wedding from the period, the plot of which could only be described as a soap opera!), a general store, hardware store, saloon, blacksmith shop, doctor’s residence with adjoining pharmacy, candy store, millinery and women’s shoe and boot shop, to mention only a very few.

Participant Greg Milenchuk said, “Looking back was looking to the future.”

“The seniors’ event at Fort Edmonton Park was one of the most delightful, interesting and pleasant events that we‘ve had the opportunity to do together. I hope we will be able to return as we were only able to explore about one-half of the displays and activities that were available,” Bonnie Lampen said.

Member Elsie Duncan said, “I have always enjoyed visiting museums, and Fort Edmonton is one of the best. It gives us a glimpse into the fur-trading past of our province and the ingenuity of the pioneers that built our country. I would go again any time.”

It was a wonderfully pleasant summer afternoon and invited an outdoor picnic in an alcove adjacent to the Methodist Church. Since the group was only able to spend some quality time at the fort complex and 1885 Street, many of them requested a return visit to view what was missed.