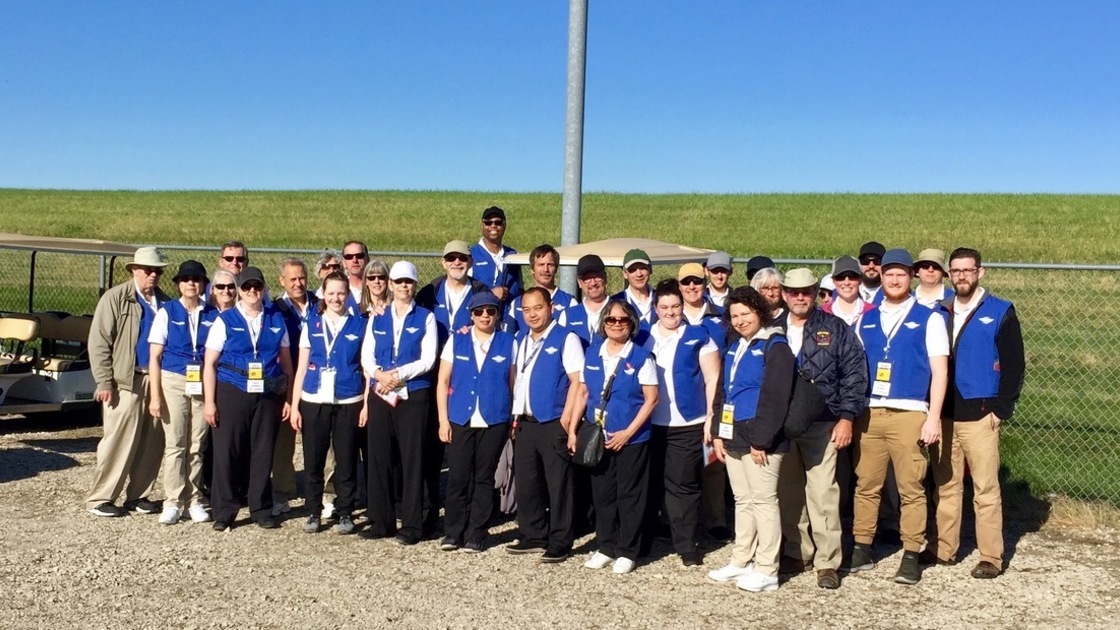 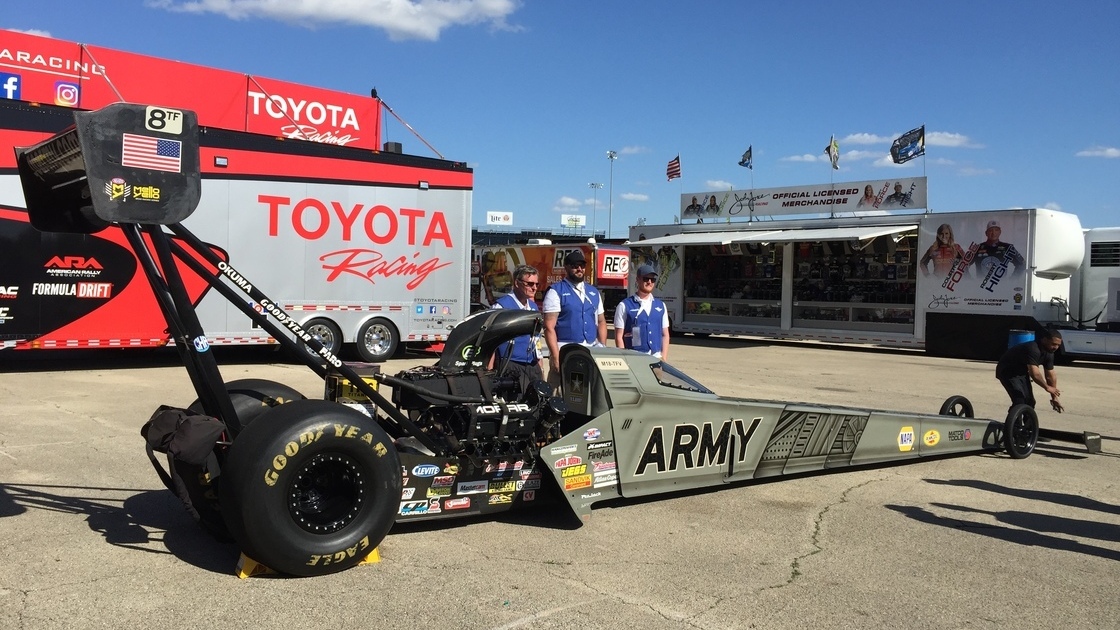 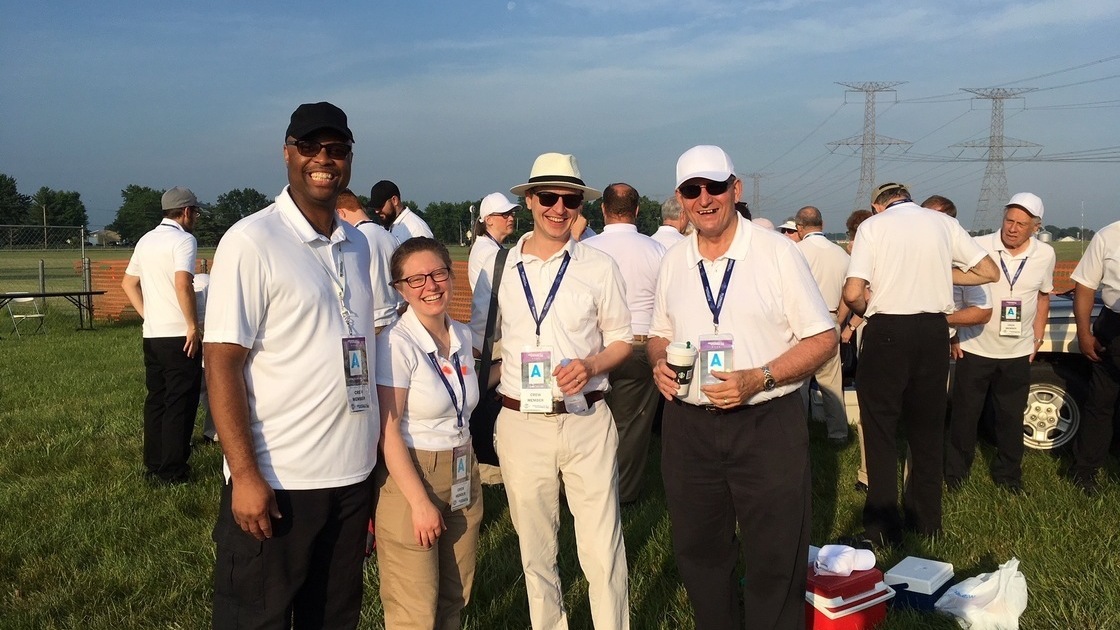 The first two activities were organized by Associate Pastor Eric Anderson with the assistance of deacon Jim Privratsky. The first day of fundraising included 32 members from Illinois, Indiana, Minnesota and Wisconsin who served as ushers at the NHRA Nationals championship drag race, which took place at the Route 66 Raceway in Joliet, Illinois on June 3.

That morning, the group entered the raceway grounds and went to work checking tickets, helping patrons find their seats and monitoring the crowd throughout the day.

Afterward, several member volunteers commented on how thrilling it was to work so near to the powerful race cars, which reverberated the pavement and grandstands each time their drivers sped down the drag strip.

Devon Hochstetler, a member from Indiana, remarked that he “enjoyed learning more about drag racing,” adding that the fundraiser presented opportunities “to beseech our Father’s intervention” in the weather and in other areas, and “for character development.”

On the second day of fundraising, which occurred about a month later, on July 1, a total of 39 members from Illinois, Indiana, Minnesota, Missouri, Ohio and Wisconsin volunteered to work as ushers at a NASCAR Cup Series 400 race at the Chicagoland Speedway in Joliet, Illinois.

One of the volunteers, Billy Stepter of the St. Louis PCG congregation, expressed his excitement about the prospect of working at such a popular, nationally televised event. He quipped, “We’re going to be on live TV today—I just love doing God’s Work!”

After the race, his brother Tony remarked, “My family are Kyle Busch fans. Kyle Busch’s NASCAR racing number is 18 and my son wears the number 18 on his little league baseball team uniform. I happened to be assigned the number 18 on my credential pass when we clocked into work this morning, and I mentioned that it would be really cool if my family’s favorite driver won the race today—and he did!”

Minnesota member Linda Haider noted how God intervened in the weather at the speedway that day. She said it was “wonderful how the hot humid weather changed” to breezy, dry conditions during the event. She added that it was inspiring “to see how God answered Mr. Culpepper’s prayer in the morning and did not allow the [forecast] rain to postpone the race.”

The third day of fundraising took place the next weekend, on July 9, with 21 PCG members from Illinois, Kansas, Missouri, Ohio and Oklahoma volunteering for a catering company at the Iowa Corn 300 Indy car race in Newton, Iowa. Mr. Anderson organized this event with the help of deacon Mark Arnfield.

At this event, members were tasked with staffing food tents that housed self-served buffet-style lunch and beverage stations. The group divided into three teams at the start of the day and were taken to their respective food tents to meet their catering supervisors. The catering staff’s stressful moods were eased when PCG volunteers quickly jumped into action setting up beverage and food stations as well as outfitting the tables with tablecloths and condiments.

Once set-up was concluded, a steady stream of hundreds of ticketholders flowed into the tents with their friends and families and kept members busy working much of the day. Some PCG workers were assigned to replenish food in the self-serve food lines while others were collecting drink tickets and handing out beverages.

“We worked very well together during the setup phase; feeding the crowd and breaking it all down at the end was terrific,” said St. Louis member Stan Koebel. “It felt really fulfilling to be working for God.”

“God worked things out and provide just the right amount of manpower to do the job,” said Kansas City Deacon Mark Arnfield.

The total funds raised at the three events was $9,735.75. The money will be added to the region’s annual fall fruit sale proceeds and sent to headquarters in early 2019 earmarked for the Church’s aircraft fund.

Members plan to work a fourth fundraiser selling concessions at the Kansas Speedway following the 2018 Feast of Tabernacles. This event could potentially net another $2,000 to $3,000 dollars, depending upon how many PCG members can volunteer.