The First Martyr of the End Time
Although his life seemed invaluable to God’s Work, the Work didn’t stop upon his death.
By Ryan Malone • November 1999 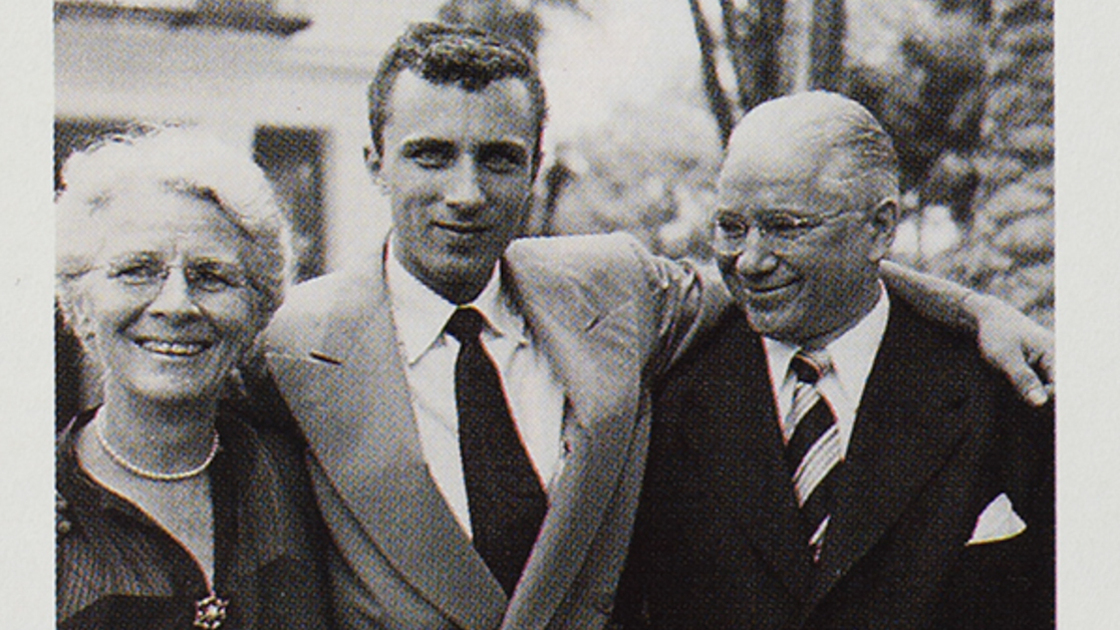 “God called on Abraham to be willing to sacrifice his son. God was willing to sacrifice His Son for you and me. I have had to give up my son. Richard David Armstrong died Wednesday morning, July 30, as the first real martyr for God’s cause in these latter days just before the return of Christ in all power and glory” (Herbert W. Armstrong, co-worker letter, Aug. 5, 1958).

That summer in 1958, four groups of ministers were on baptizing tours, visiting a total of nearly 2,500 prospective members across the United States, preaching the same message that stirred up angry mobs to kill Christ and His ministers years ago. In our modern times, though, “Satan cannot stir up a bloodthirsty mob against men on such a tour,” Mr. Armstrong wrote. “Satan is cunning. He can strike at them through the instrumentality God has provided to be used in reaching people over such great distances. He can use an automobile wreck to kill those who proclaim the message he hates.” Such is what happened to perhaps the highest-ranking minister under Mr. Armstrong at the time—his son, Richard.

While Alton Billingsly was driving north on Coast Highway 101 in California at about 1:15 p.m. on July 23, 1958, Richard had his briefcase open, checking his list of people to visit and planning their next few stops. The four-lane, divided highway had merged into a two-way highway. Somehow neither of them noticed it. A half block or so to their left was another paved road running parallel to theirs; Mr. Billingsly supposed that to be the other two lanes of the highway. They moved over into the left lane—the lane of oncoming traffic—to pass, believing it still to be a divided highway. Just before they passed the car on their right, a Cadillac came over a slight hilltop. Mr. Billingsly swerved left, but the cars were moving toward each other too quickly. The oncoming car hit them head-on, just to the right—shearing off much of the right side of the car. Had Richard not dived toward the driver just before impact, he would have been killed instantly.

Although Mr. Billingsly was not seriously injured, Richard was taken to San Luis Obispo Hospital and placed in critical condition. His pelvis and right elbow were badly broken; his jaw was broken in several places with several teeth knocked out; his stomach and intestines were knocked up through the diaphragm against the left lung, collapsing the lung and shoving his heart over on his right side.

A week later, Richard’s kidneys were failing. They would have to move him to Los Angeles where they could hook him up to artificial kidneys. Because he was in traction, moving him could have killed him. So they carried him in a special bed that kept him in traction, slowly driving to Los Angeles in the middle of the night.

Perhaps the greatest lesson any martyr leaves behind is the lesson of faith. Faith in God’s promises.

Hebrews 11, the faith chapter, speaks both about those who died and those who were martyred in the faith. They died because of their faith. What did they have faith in? They believed God’s promise that they would be resurrected to life eternal! (Hebrews 11:35). It was faith in God’s promises that gave them the courage to withstand the torture and even the death they faced. But, “these all died in faith, not having received the promises …” (verse 13).

Mr. Armstrong used the death of the “first real martyr in these latter days” to teach God’s Church about God’s promises—teaching them that God’s promises do not include the how or when. “As Abraham will yet receive the promise of actual possession of the Promised Land and eternal life in it—at the resurrection—so will my son Richard David Armstrong. God’s promises are sure! Never lose faith!”

The number of times the word faith shows up in Mr. Armstrong’s writings about his son’s death—both in co-worker letters and in chapters 70 and 71 of his Autobiography, Vol. 2—are seemingly countless.

He wanted God’s people to build faith from the experience. Driving from San Luis Obispo to L.A. the night of July 29, Mr. Armstrong said he struggled deeply to keep his mind in a state of faith. The Sabbath after Richard’s death, Mr. Armstrong debated going to Church services back at the college. “But then I realized it was my duty to attend …. I realized that some of the students had erroneously assumed that ministers were under such divine protection that no such tragedy could occur to one of them. Dick’s accident and death might shatter this faith. I knew I had to bring a message that would bolster and strengthen, not destroy, faith” (Autobiography, Vol. 2).

Another co-worker letter, dated August 28 of the same year, states, “Some had thought God would never let such a thing happen …. But nothing would please Satan more than to see us now lose faith.”

It’s no wonder why God, in the same chapter known as the “faith chapter,” goes into detail about the martyrdom of so many of His saints. The Church and its co-workers received perhaps the biggest lesson in faith it had ever received! In a co-worker letter written after the accident, before Richard died (on July 27), Mr. Armstrong scolded many of them for letting down in their prayers and offerings. “Co-workers, will you not only pray for my son’s miraculous and speedy recovery—but also for the financial salvation of the Work of God?” Throughout the letter, with the call for more believing prayers, Mr. Armstrong called for more faithful offerings. He said Satan had struck one of God’s “very chiefest laborers,” but that God’s Work needed more co-worker laborers “who help with their urgent heart-rending prayers, and with their tithes and generous offerings, regularly every month, or even every week.”

The greatest example of faith from the whole ordeal was Richard himself. He never doubted God’s promises while lying in traction.

Before going on the baptizing tour, God used him powerfully to perform two miracles. A woman was in labor, and her baby was given up by the doctor to die if she didn’t have a Caesarean section. “The husband and the wife were counseled by Dick not to become frantic or to lose hope but to rely on God. Dick refused to lose faith. He continued to pray. And finally his faith was rewarded. The fetus turned over in the womb. The doctor was called back, and the baby was born in a normal manner” (Autobiography). The other incident involved a paralyzed war veteran who called for Richard to “pray for him and ask God to perform a miracle, that he might be restored to a life of usefulness.” The man, after being anointed, was almost instantly healed. He regained full use of his arms and legs. “This was one of Dick’s last acts,” Mr. Armstrong wrote (ibid).

During the week after the accident, Richard David had those nearby read the Bible to him. Two of the three nurses were from Ambassador College. One commented about his good spirit. “Once in prayer, he began thanking God for the many, many blessings that had been lavished on him,” saying it aloud without regard to the pain his jawbone was causing him. “The nurse said that this continued for a long time—he had so many things to be thankful for. I had typed out a number of biblical promises that God had made for us, from various parts of the Bible, for our nurses to read to Dick in the ambulance when he was awake.”

Richard was a man of golden character, which shined through especially at this time of great tragedy in his life: “I am well pleased with the manner in which he is behaving under the most terrible ordeal of his life. He is showing far greater strength of character than even I realized he had” (July 27 letter).

Filling his mind with God’s blessings and promises, Richard Armstrong died the morning of July 30, upon arrival at the ucla medical center. Just before doctors could get the artificial kidney connected, his heart stopped. Despite the presence of some of the most famous surgeons frantically trying to massage his heart back into action, he died.

Mr. Armstrong said that the day Richard was born was “the happiest day of my life”—since both he and his wife were told she would never again bear children after their two daughters. Richard’s birth was the result of obedient, faithful prayer! And throughout his life, God used him to do a great work of faith under his father.

Richard was one of the first four students to attend AC in its first year, 1947. He became the first student body president of the college. Later, he was director of God’s Work overseas. Mr. Armstrong even said, “If God let my life be taken, it would have to be either Dick or Garner Ted who would step into my shoes …“ (ibid).

When he died, Richard left more behind than a wife of 13 months and a 2½-month-old son. He left behind a legacy of faithful devotion to God’s Work. And although his life seemed invaluable to God’s Work, the Work didn’t stop upon his death. Mr. Armstrong admonished everyone to forge ahead: That if his life was a great asset to the Work, his death may have been worth even more by inspiring those still living to devote their lives to the Work as Richard did.

Mr. Armstrong wrote in the August 5 letter, adapting his final words from Lincoln’s famous Gettysburg address: “It is now for us, the living, rather to be dedicated here to the unfinished Work of God, which he who now lies buried helped thus far to advance. It is rather for us to be now dedicated to the great task remaining before us—that from this honored dead we take increased devotion to that cause for which he gave the last full measure of devotion—that we here and now surrender and give our lives to God a living sacrifice—that Richard David Armstrong shall not have died in vain; but that this nation and the whole world shall hear the good news of that government of God, and by God, for the people, that shall usher in lasting world peace, salvation, in the joyous World Tomorrow!!”