Know Your Bible: Who and What Is God?
Develop a more vivid picture of your Father in heaven.
By Mark Jenkins • July 4, 2018 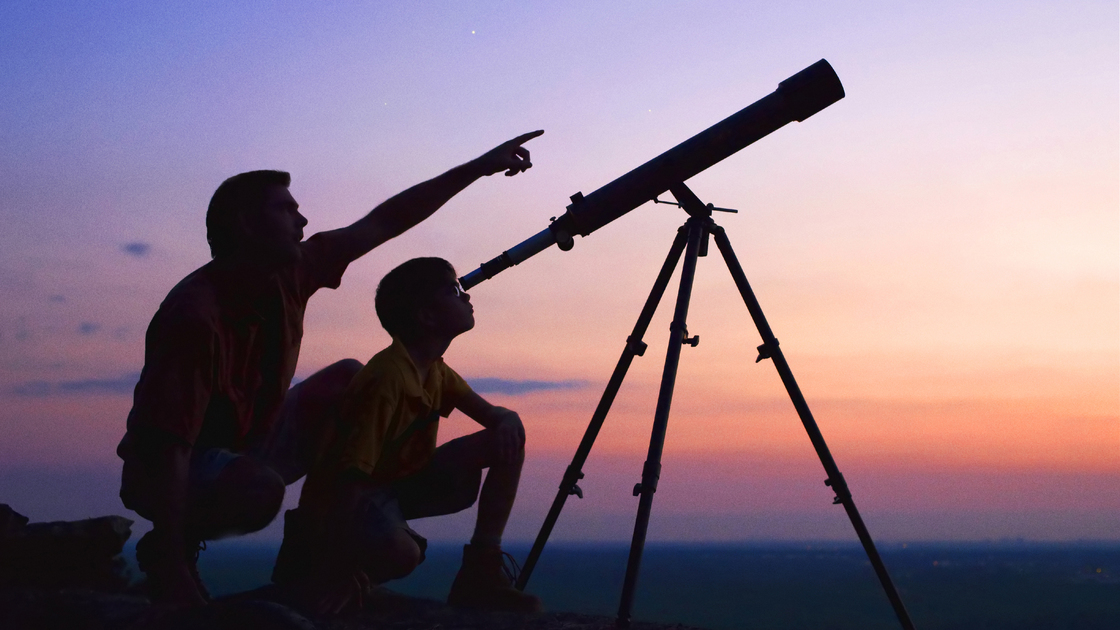 The first chapter of Mystery of the Ages begins with a remarkable goal: to make God—whom we cannot physically see, touch or hear—as real to us as our own human fathers. These men who raised us, Herbert W. Armstrong observed, don’t seem like a mystery. Our Father God though—who created and sustains the entire universe—remains a mystery to most of humanity.

It need not be so. Let’s use the scriptures from Chapter 1 of Mystery of the Ages—“Who and What Is God?”—to develop a more vivid picture of our Father in heaven. Grab a pencil or a pen, so you can write down the scriptures, etching them into your memory. Let’s begin!

You’ve probably noticed that not only do most not know God, but they seem not to want to know God.

1. Are some living on Earth now not only ignorant of God, but willingly ignorant of Him? Romans 1:18-22; 2 Peter 3:5. The billions alive today cannot answer the most important question: who and what is God?—and they do not want to answer this question.

3. Do men, in their ignorance, worship the creation rather than the Creator? Romans 1:25. The first created man, Adam, received a certain amount of vital knowledge from God. Even though Adam cut himself off from God, he still passed on some of the knowledge he received to his sons, and it continued that way for many generations. But as generations passed, the knowledge of God became more and more distorted, until the true knowledge had faded almost entirely and paganism prospered. Idols made of clay, wood, stone and other materials—which you can see in museums today—became the main form of worship, thus resulting in mankind worshiping creation rather than Creator.

4. How did the Athenian intellectuals of Paul’s day view God? Acts 17:18-19, 22-26, 28. Paul said that they were “too superstitious.” One of their altars bore an inscription that read: “To the unknown God.” He declared that God to them—the great Creator who made all things and gave life to everyone! Even those who might claim to believe in God cannot tell you who and what God is! He is not real to them.

5. What does our educational system keep out? Romans 1:28. They do not retain the knowledge of God! Instead, modern education has become fixated on the materialistic view of existence. Even in the elementary grades, it has accepted evolution as the answer to our origins, and it denies even the possibility of a Creator.

2. Who or what is the Logos? Verse 14. The Logos is the Being who became Jesus Christ. He became flesh and blood, and dwelt with mankind.

3. What was the Logos before He became Jesus Christ? John 4:24. God is a spirit, which is invisible to the human eye. John 1 reveals that there were initially only two members of the God Family: God and the Logos, later to become God the Father and Jesus Christ. At this point in time, Jesus Christ was not yet the Son of God.

4. Who was Melchizedek? Hebrews 7:1-3. In Old Testament days, Melchizedek was identified as the King of Jerusalem (Genesis 14:18). The Apostle Paul tells us Melchisedec existed “[w]ithout father, without mother, without descent, having neither beginning of days, nor end of life; but made like unto the Son of God; abideth a priest continually” (Hebrews 7:3). In Mystery of the Ages, Mr. Armstrong wrote: “Since Melchisedec was ‘like unto the Son of God,’ and abides as High Priest forever continually, and Jesus Christ is now High Priest, Melchisedec and Jesus Christ are one and the same Person.” Therefore, these qualities also apply to Jesus Christ, who had always existed as the Word. He was with God, and He was God.

5. Were angels created before the creation of matter—such as Earth? Job 38:7. The angels, who had already been created, shouted for joy at the creation of Earth. Genesis 1:1 talks about God creating the Earth and the heavens. Genesis 2:4 makes it clear that the whole material universe was created at the same time as the Earth: “These are the generations of the heavens and of the earth when they were created, in the day that the Lord God made the earth and the heavens.” We don’t know how long the angels existed before this creation; it may have been thousands or even millions of years.

A Family of Creators

1. What is God composed of? John 4:24. People relate to the world around them using their five senses. Because God is a spirit, He does not seem real to humans. Even though God is not composed of visible matter, He does have a definite form and shape.

2. What is the form and shape of God? Genesis 1:26. God looks like you! Animals have many different shapes and forms, have different numbers of limbs, etc, but mankind was made in the image and likeness of God. He has a face, eyes, a nose, etc. No animal of any type has a hand like the human hand or a mind with the power to direct that hand as a man who can think and design does. We share God’s appearance and the ability to develop His character through the Holy Spirit.

3. What was Jesus’s appearance? John 14:9. Jesus Christ also looked like an ordinary man—so much so that Judas accepted a bribe to identify Christ to His enemies. He looked like His Father also, just as you and I do. Yet today, because they are composed of spirit, they shine like the sun in its full strength (Revelation 1:16) with their hairs as white as wool, feet like fine brass, and eyes like a flame of fire (verses 14-15).

There are many scriptures describing God’s character. Mr. Armstrong described it this way: “The character of both God the Father and Christ the Son is that of spiritual holiness, righteousness and absolute perfection. That character might be summed up in the one word love, defined as an outflowing, loving concern. It is the way of giving, serving, helping, sharing, not the ‘get’ way” (ibid).

5. What does the God Family do? Genesis 1:1; Ephesians 3:9. God and the Word were creators. They existed before anything had been created, and they created everything, including this Earth and everything in the universe. This was the beginning of the God Family. You might be familiar with the Hebrew word translated God: Elohim—a collective noun, plural in form but singular in usage like family, church or group. The origin we find in John 1:1 is the beginning of the God Family.

6. What roles did God and the Word play in creation? Psalm 33:9; John 8:28-29. God the Father gave instructions to Christ. Mr. Armstrong used the analogy of Henry Ford making automobiles. Thousands of men in overalls made the cars on an assembly line, but Mr. Ford was the maker of the automobile. Similarly, “God tells Christ what to do… . Jesus then speaks, as the workman, and the Holy Spirit is the power that responds and does what Jesus commands” (ibid). This demonstrates how God’s government works. God the Father was in charge, and the Word carried out His commands.

7. What is the basis of that government? Matthew 22:36-39. God’s law—His way of life—is summed up by the word love and subdivided into the two great commandments: love toward God and love toward neighbor. This can be further subdivided into the Ten Commandments (Exodus 20:1-17). Because we apply God’s law in principle (2 Corinthians 3:6), it is a perfect law that covers every possible situation and produces “peace, happiness, cooperation through obedience” (ibid).

God Is a Family

1. Is the God Family limited to just these two Beings? Isaiah 9:7; Luke 1:33; Romans 8:29. Not only is the God Family not limited to just God and the Word, His Family will never cease to grow! When Jesus Christ was born as the Son, He became the first of many brethren. Thus, the Scriptures reveal that the trinity doctrine, which limits God to three, is false. There is no “Ghost” personage as referred to regularly by false churches. Mr. Armstrong observed that the trinity teaching did not exist until a hundred years after most of the New Testament was already written. Later, the false teaching was forced on the world by the Roman emperor Constantine and the Nicene Council.

2. Is the Holy Spirit a person? Acts 2:2-3; John 7:37-39; Acts 10:45. Modern translations often wrongly refer to the Holy Spirit as “he,” but the Scriptures make it clear from the introduction of the Holy Spirit on Pentecost that “it” is the proper English word. Multiple scriptures show that it can be poured out like a fluid from one container to another—and you can’t pour out a person!

Having used God’s Scriptures to reveal who and what He and His Family truly are, Mr. Armstrong summarized as follows: “Finally, in briefest summary: God is a Family composed at present of the two persons of John 1:1-4, but with many thousands, already begotten by God’s Spirit, in God’s true Church, soon to be born into that divine Family at Christ’s return to Earth. Jesus Christ, by His resurrection, was born a divine Son of God (Romans 1:4)—the first so born into the God Family (Romans 8:29).

“Both God and Christ are composed of spirit, formed and shaped as a human person, but with eyes like flames of fire and faces bright as the sun full strength!

“God is Creator of all that exists. Both God and the Word (who became Christ) have existed eternally and before all else. From them emanates the Spirit of God, by which God is omnipresent and omniscient. God the Father is the divine Father of the God Family, into which truly converted Christians shall be born” (ibid). As a young person in God’s Church, you have the potential to be born into that Family!