The Plunge
A lesson in overcoming fear
By Eleanor Clarke • June 25, 2018 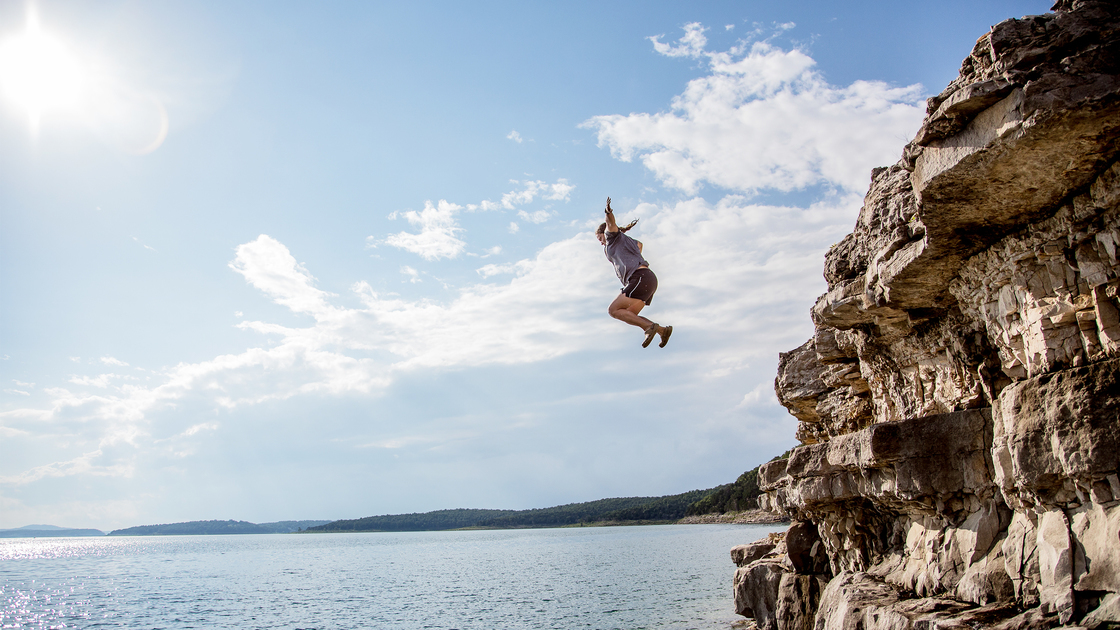 I felt the gentle breeze blow through my hair and the damp moss spring softly beneath my toes. I looked up, and I saw beautiful, blue sky. I looked down, and I saw the dark water rippling far, far below. This was it. I counted in my head: 1…2…3…Okay, jump! … Nothing happened. My body wouldn’t budge. I was frozen stiff with fear at the top of the cliff. I couldn’t climb down, and I couldn’t jump off. I was stuck.

This happened several years ago in New Zealand, when we were having an annual congregational campout. We were staying in cabins at the Hunua Falls Camp, and we had hiked the couple of hours to Hunua Falls earlier in the day. Most of the hike was along a river, and at several points, the river opened up into a lagoon.

As we hiked back down the forest path after spending the day at the Falls, we decided to rest by one of these lagoons. This particular one had a cliff to one side.

We all waded into the water, and we realized that it got quite deep—deep enough to jump into. So, some of the older teens started climbing up to the top of the cliff and jumping into the lagoon. As I watched below, I thought that it looked like a lot of fun. I followed my friend to the top of the cliff. She ran forward immediately and jumped, making a nice little splash as she landed. “Come on, it is fun!” she called back to me from the water.

I had forgotten one small detail, however: I was absolutely terrified of heights. I stood there, frozen and completely petrified. Time slowed down. People were playing in the water below me, climbing the rocks around me, and running right past me to leap off the cliff. But I was outside of it all. I couldn’t hear anything except my heart beating in my ears. What seemed like hours passed by, but it probably wasn’t more than about three minutes.

I took a deep breath. A thousands thoughts rushed through my mind—most of them about all of the horrible things I absolutely knew were going to happen. What if I slip? What if I land in a shallow area? What if I’m allergic to something in the water? What if the Loch Ness monster is lurking in the water, waiting for me to jump?

But then another thought prevailed over my useless worries: I won’t let this beat me. My mind calmed down, and my muscles relaxed. And then, my body sprang into action. I leaped toward the edge of the cliff, adrenaline pumping through my veins. The ground disappeared from beneath me, and I soared through the air.

In the air, time stopped completely. I felt weightless. I floated above the water for an eternity. All the fear melted away, and in that moment, everything was quiet. The sounds of the children playing just faded away. Complete, piercing silence came over me.

Then gravity took hold, and I felt the air rush by. In the next instant, I plunged into the cool water and raced to get my head to the surface. The quiet moment had passed, and now everything suddenly got very loud. I was distinctly aware of everything around me—the cool water, the bright sunshine, the children laughing. None of the horrible things had happened, and I was still alive. I had survived the plunge!

This was only one small event in my life. It was only one little jump, but it completely changed my approach to fear. Rather than letting that fear stop me, I allowed it to drive me to a determined effort to overcome it.

We all have fears, but we shouldn’t let them discourage us. Fear is actually a tool we can use to build courage. Courage cannot exist without fear—if you aren’t fearful of anything, you don’t have to be courageous about anything either. But if you are fearful of doing something, it takes courage to do that thing in spite of your fear. So rather than letting your fear hinder you, let it help you—use it to build your courage.

And in case you were wondering, that huge cliff was actually a rock no more than seven feet tall.