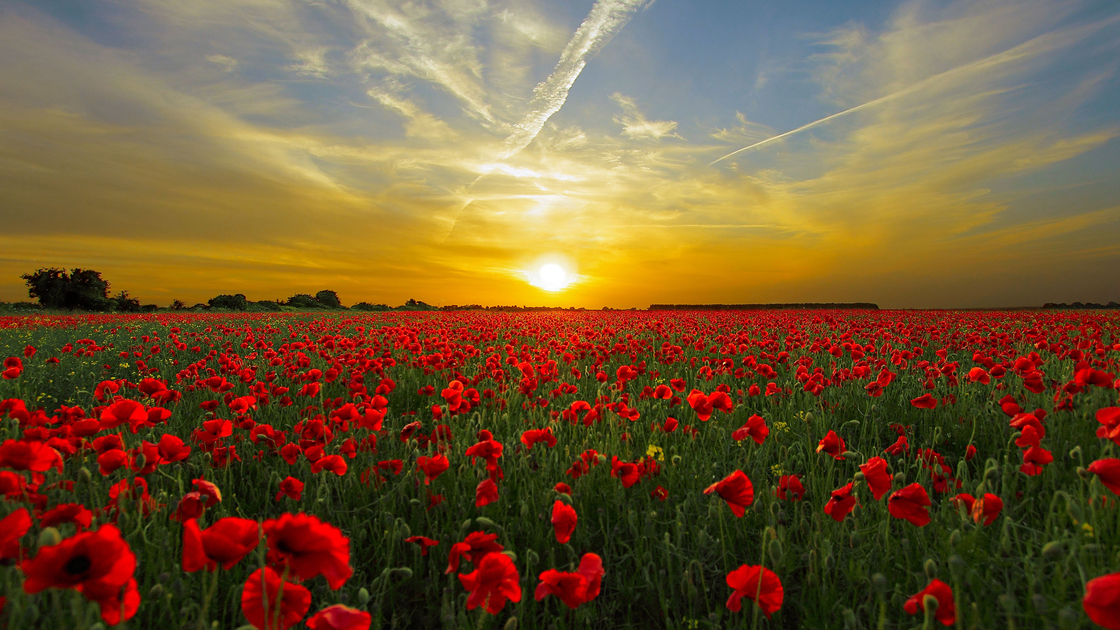 During World War I, there were three major battles in Ypres, Belgium. It is estimated that somewhere between 200,000 and 400,000 men lost their lives during these battles. The Second Battle of Ypres, which took place from April 22 to May 25, 1915, was the first battle in which poisonous gas was used on a large scale.

One soldier who fought on the side of the Allies in the Second Battle of Ypres was a Canadian man named John McCrae. He was a medical doctor with the First Brigade of the Canadian Field Artillery.

During the battle, McCrae saw his friends blown up by his side. Comrades, shredded by the bombs, died in his arms. The senseless bloodshed seemed endless. The fields were saturated with blood, torn up by constant warfare. But as McCrae looked over the dead corpses—over the war-torn fields—a bright red color captured his attention. It was a blossoming poppy.

Poppy seeds can lay dormant in the ground for decades. All they need in order to germinate and begin growing is light. The ground where the battle had taken place was absolutely destroyed—churned up by bullets, grenades and the frantic footsteps of soldiers. All of the destruction had exposed those dormant poppy seeds—giving them the light they needed to grow once again.

In the midst of desolation, these poppies became a symbol of hope. Where the ground was destroyed and robbed of nutrients, the poppies blossomed and flourished the most.

After McCrae reflected on the sprouting of the poppies around the graves of his comrades and friends, he wrote the famous poem “In Flanders Fields.” The last verse of the poem helped begin the tradition of poppies being used as a sign of remembrance and hope:

Take up our quarrel with the foe:

To you from failing hands we throw

The torch; be yours to hold it high.

If ye break faith with us who die

We shall not sleep, though poppies grow

The poem was written to remember the noble cause for which the Allied forces fought. The soldiers fought against an imperialistic empire. They fought to defend their freedom. They fought to preserve peace. They fought a war that was meant to end all wars.

The poppies symbolized victory and remembrance for all the dead. They became a symbol of a beautiful new beginning after the close of one of the darkest chapters of human history. The poppies show that, no matter how horrible the past was, life will continue.

But World War I did not end all wars! World War II began only 21 years after World War I ended, and that war was much more devastating than World War I. Today, we are on the cusp of the worst war this world has ever seen. It will cause the worst bloodshed in Earth’s history. In a world of such terrifying danger, who is fighting to preserve peace? Who is sowing the seeds of hope?

The greatest suffering of all time will cause man to see that only God can bring forth life in a dying world.

Another time will come when the fields will again be saturated with blood, torn up and shredded by constant warfare. At that time, the seeds of God’s Work will bring forth fruit. Just like the poppies that blossomed amidst the worst of conditions, the Work we are a part of today will give hope to those who suffer.

It is our job to give this world hope—to show them that life will spring forth after the greatest desolation man has ever seen.

All it took to inspire Lt. Col. John McCrae was the sight of a poppy. How much more hope can we give to someone who sees God’s Work? Every task we do—every job we complete—is noticed and will be remembered. We fight for the honor and glory of our God. We fight against an oppressive system. God’s Work today can give hope to the lives of millions who have yet to go through their nightmare of warfare.

The more destroyed the soil is, the more likely it is for poppies to blossom in it. Likewise, the worse that world conditions get, the more likely people will be to respond to our message of hope.

God created the poppy, and it is indeed a symbol of how something beautiful can arise out of a desolate wilderness. Each one of us can lay the seeds that will bring hope to the innumerable multitude and to tens of thousands of our Laodicean brethren by supporting God’s Work today.

As world conditions grow worse and worse, let’s put our all into the only thing that really matters: sowing the seeds of hope. One day, our work for God will blossom, and out of a Great Tribulation, we will see a beautiful new beginning.