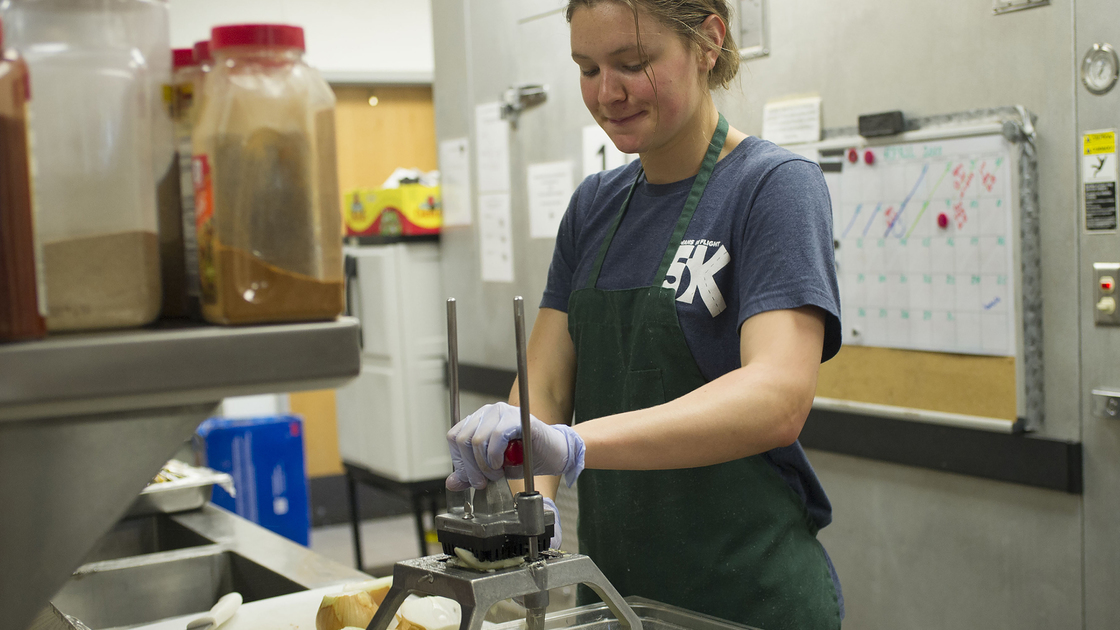 I was standing in a giant kitchen—salad station on my right, sinks on my left. Ladies in red shirts bustled around me as they completed their various tasks, such as chopping lettuce, stirring soup, and carrying food to the serving line at the front. I had just finished baking French fries. Lots of French fries.

Having finished my previous job, I sought out my supervisor and asked if she had something else that she wanted me to do. As she momentarily thought about her answer, my mind raced as I contemplated the different jobs that I hoped she would give me—the fun jobs, like maybe pulling out of the oven a pan of beautiful, golden-brown muffins, whose delectable aroma would quickly bring a crowd of people to admire the fresh-baked creations.

My muffin daydreams were suddenly interrupted by my supervisor’s reply.

She gestured to her right, toward three pans of chicken sitting in the giant refrigerator—three deep pans filled with an uncountable number of tiny chicken wings. I said, “Yes ma’am,” but I was a little crestfallen. My muffin dreams were a lot more glamourous. I was not very excited about this new task that I had been assigned, and I anticipated an extended period of boredom.

As I began working on these massive pans that contained a seemingly endless supply of tiny chicken wings, several volunteers came up to me and asked if I wanted any help. I immediately told them that I would love it if they would help me. Maybe that would make the job go faster, and perhaps I could still realize my muffin dreams if we de-boned all the wings quickly.

To my surprise, these ladies appeared to actually like the tiresome job. One of the kitchen ladies in particular—a sweet lady whom we all called “Miss Joy”—began commenting on how fun it was to see the tiny body parts of the chicken as we disassembled the wings to remove the undesirable sections. As they continued to happily remove the bones from the chicken, I suddenly realized that they were completely enjoying themselves! They were having a blast doing a job that I couldn’t wait to finish because I wanted to move on to something more enjoyable. After a while, I realized that because of their positivity, I too was beginning to enjoy myself. I joined in with some positive comments of my own and thought excitedly to myself, This is fun!

When reflecting on this situation later, I realized that I had the wrong perspective while working for God’s Philadelphia Youth Camp. We were all working in the kitchen to feed the many hungry campers, but I wasn’t really approaching my assignments with the right attitude. These hard-working, positive, volunteers taught me two valuable lessons.

The first lesson I learned was that these ladies were excited to do any job, no matter how gross it was. They were so thankful that they had been given the opportunity to help God’s Work in any fashion. It did not matter to them what job they did, whether it was glamorous or grungy. On the other hand, I was only concerned about doing the “fun” jobs that would be noticed at a moment’s glance. This attitude was vain.

The second lesson I learned was that these ladies were eager to work. As an employee, I was getting paid for the work that I was doing during camp; they were not. They traveled from all over the United States to volunteer their service for God’s youth at summer camp. Some of them had to get time off from their jobs; some had to leave behind husbands and family for a week or two; some had to travel thousands of miles. They had sacrificed to be there to work pyc. Not only did these ladies show up faithfully for their shifts, but they also showed an eagerness to jump right in and help wherever there was a need.

When I think about this little instance of the chicken wings, one lady always comes back to mind: the one we all affectionately called “Miss Joy.” She was an exceptionally sweet lady, and she completely lived up to her name. She joyously took on any job, no matter how seemingly insignificant it was. Her willingness to help and serve others was evident in everything she did. She inspired me for the rest of camp to approach any task with a positive mental attitude. I learned to be more appreciative of the fact that I was working for God’s youth in such a positive environment.

So the next time you are given the opportunity to do a job of service, approach it with a positive and eager work ethic, just as the ladies that I worked with in the kitchen did. Be happy to do any job, no matter how boring you think it is.

If you view work with this positive mental approach, who knows? Maybe you can become someone else’s “Miss Joy.”