Know Your Bible: Let the Stones Speak
Confirming the truth of God’s Word a stone at a time
By True Education Staff • May 7, 2018 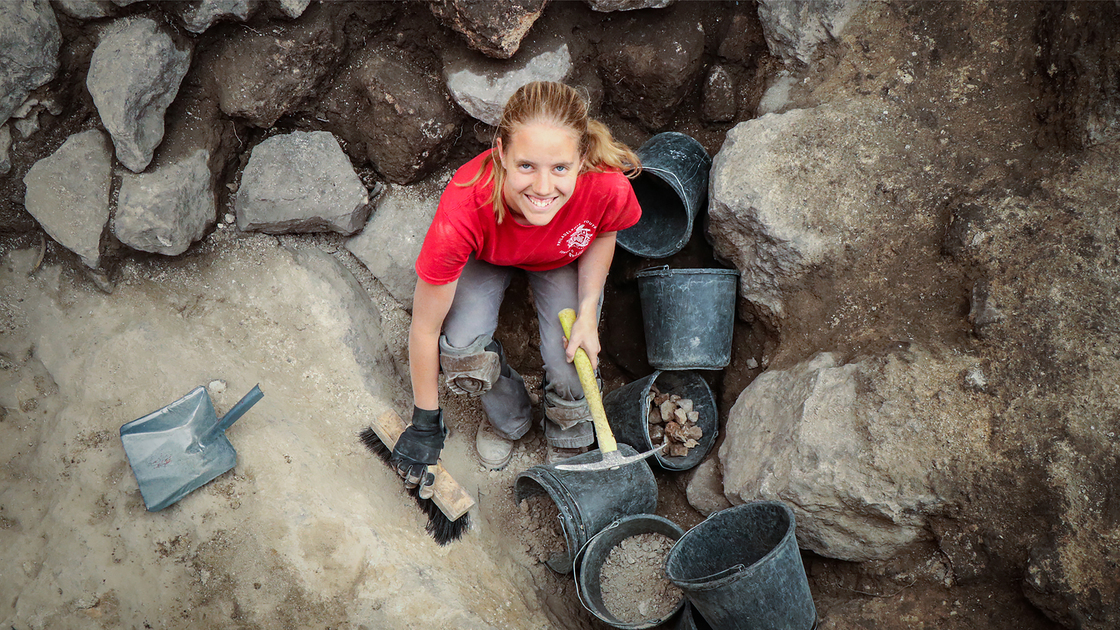 Dr. Eilat Mazar is unique among archaeologists for one primary reason: She has accepted the validity of the Bible. She explains, “One of the many things I learned from my grandfather was how to relate to the biblical text: Pore over it again and again, for it contains within it descriptions of genuine historical reality. It is not a simple matter to differentiate the layers of textual sources that have been piled one atop the other over generations; we don’t always have the tools to do it. But it is clear that concealed within the biblical text are grains of detailed historical truth” (Biblical Archaeology Review, May 12, 2017).

In this Know Your Bible, we will examine how some of her finds have helped to confirm what we in God’s Church already know: that God’s Word is true whether it relates to how we live our lives, to prophetic events still to come, or to the historical record that Dr. Mazar’s work so often confirms. Let’s take a special look at some of the scriptures that relate to the artifacts she has unearthed in Jerusalem.

Dr. Mazar’s first discovery that drew the attention of the Philadelphia Church of God was King David’s palace—not just because of the find itself, but because of how she located it.

1. Who built David’s palace? 2 Samuel 5:11. Scripture describes David’s palace being built by workers sent by the Phoenician king of Tyre as a gesture of friendship.

2. After David was anointed king, where did he go? Verse 17. We learn here that David “went down to the hold.” This is a key point. “Where was David coming down from?” Dr. Mazar asked. She reasoned that he must have come down from his palace—which would have been situated on top of the hill, just outside the original Jebusite city.

Many archaeologists had assumed that David’s palace must have been located within the walled city. But why would the king of Israel build his royal palace inside the cramped city walls of the old Jebusite fortress, Mazar wondered. The old city was only about 12 square acres. Relying on the history recorded in 2  Samuel, however, the location of the palace to the north made sense: Once David heard about the Philistines’ approach, he left his palace at the peak of Mount Zion and “went down” to the stronghold, or entered the walled city.

With this Bible-based theory in mind, Dr. Mazar started digging immediately north of the City of David, right at the top of Mount Zion. And after just one season of digging, she discovered a massive wall—up to 10 feet wide in some places, and running 100 feet long, east to west.

The following season of excavation, Dr. Mazar expanded the dig site, discovering a much larger wall over 16 feet wide, testifying to the building’s importance and grandeur. As she put it, this was “not just a house, but a fantastic house.”

The menorah medallion—along with other jewelry and gold coins—was discovered 50 yards south of the Temple Mount inside a Byzantine structure that dates back to the sixth century a.d. The items were buried in two places. The medallion was buried in a depression in the floor, along with a smaller medallion, two pendants, a gold coil, and a silver clasp. Dr. Mazar believes that the menorah medallion was used to adorn a Torah scroll. If this is the case, the medallion and other items would be the earliest known Torah scroll ornaments ever discovered.

The medallion is four inches wide. A seven-branched menorah, a shofar and a Torah scroll are etched onto its surface.

1. What is the significance of the seven-branched menorah? Numbers 8:2-4; Revelation 1:12-13, 20.The lampstand was located in the tabernacle. In Revelation, God reveals that the seven candlesticks represent the seven Church eras.

2. How was the shofar typically used? Joel 2:1. Of the 72 biblical references to a shofar, the majority of them refer to the alarm of war, which is why we generally associate the instrument with sober occasions. But the shofar was more versatile than that. In four references, it is used as a general gathering device. Isaiah 27:13 speaks of the “great [shofar]” that will signal the gathering of those coming out of a future captivity. Four other times in the Hebrew Bible, the shofar is blown as a precursor to major announcements or for the purpose of grabbing attention.

3. Why was the trumpet blown when the new moon appeared in the seventh month? Psalm 81:1-3.The psalmist Asaph declared: “Sing aloud unto God our strength: make a joyful noise unto the God of Jacob. Take a psalm [zimrah], and bring hither the timbrel [tof], the pleasant harp [kinnor] with the psaltery [nebel]. Blow up the trumpet [shofar] in the new moon, in the time appointed, on our solemn feast day.” Here, the shofar is associated with a “joyful noise” and the pleasant, delightful, sweet, agreeable sounds of the kinnor. It was blown on the new moon that was also a “solemn feast day,” and it carried special meaning on the first day of the seventh month—the Feast of Trumpets (see Revelation 8:1-2; 11:15).

Referenced more than any other instrument, the shofar is the only instrument of ancient Israel that has survived the millennia in its original form. There is no mystery surrounding this instrument—its construction, its sound or its meaning.

So we see the shofar was used for a range of purposes—from the frightening to the festive. For more on this, see “The Instruments of the Old Testament” in the November-December 2015 Royal Vision on pcg.church.

Seals of Hezekiah and Isaiah, 2009

Bullae belonging to King Hezekiah and Isaiah the prophet were discovered in the 2009 Ophel excavations at the base of the southern wall of the Temple Mount. The seals were two of 34 that were found outside the wall of what is believed to be a royal bakery that was destroyed in the 586 b.c. Babylonian destruction of Jerusalem, but Dr. Mazar and her team didn’t realize that one of these seals belonged to Hezekiah until 2015. This seal is the first impression of a Judean king ever found in a scientific excavation.

The Isaiah bulla is half an inch wide and the text on it reads: “Yesha’yah[u] Nvy[?]” The Hebrew name Yesha’yah[u] is the name “Isaiah,” and N-V-Y are the first three letters of the word for prophet. Dr. Mazar suggests the most likely and natural option for the missing letter is an aleph (‘). The addition of an aleph on the bottom line would create nvy’—the Hebrew word for prophet.

To the Hebrew ear, the word nvy—even without the silent aleph—naturally sounds like prophet. Imagine hearing a friend read an ancient coin that said “Kin Richard.” Most people would naturally hear “king” and conclude that the coin was referring to King Richard even if the g in king was missing. It’s similar in Hebrew with Yesha’yah[u] nvy, the term inscribed on this bulla. When you read (and say) nvy, you naturally hear “prophet.”

1. Which kings of Judah were contemporary with the Prophet Isaiah? Isaiah 1:1. Isaiah lived at the time of Uzziah, Jotham, Ahaz and Hezekiah.

3. What does the imprint of the sun with downturned wings on the Hezekiah bulla picture? Malachi 4:2. This symbolizes the fiery, all-powerful God who is also a God of love! It shows that God shelters and protects us! The text on the bulla is: “Belonging to Hezekiah [son of] Ahaz, King of Judah.”

The seal of Jehucal was found in 2005 on the platform above the Stepped Stone Structure where Dr. Mazar has uncovered a small section of what used to be King David’s palace. The seal of Gedaliah was found outside the wall, just at the foot of the same spot where Jehucal’s seal was found, showing that they must be connected somehow.

In 2008, the seal of Gedaliah was discovered about 600 feet south of the Temple Mount under a tower at the north end of the City of David. Dr. Mazar concluded that the tower must have been constructed by Nehemiah after the Jews returned from Babylonian captivity to rebuild the temple. Artifacts were found underneath the tower that date back to the first temple period—during Zedekiah’s reign.

1. What biblical figure identified Gedaliah and Jehucal? Jeremiah 38:1-4. These two men wanted the Prophet Jeremiah put to death! Both princes unsuccessfully petitioned for Jeremiah’s execution and were responsible for his imprisonment on two separate occasions. During Jeremiah’s second internment, the Babylonian armies besieged and demolished Jerusalem, bound their Jewish captives in chains—including King Zedekiah—and carted them off into Babylonian captivity.

2. What was the result of their accusations? Verse 6. The prophet was thrown into the dungeon of Malchiah where he was buried neck-deep in mire.

For years, adjacent to the wall of King David’s palace stood a large stone tower that archaeologists believe was built during the Hasmonean Period (142–37 b.c.). In the summer of 2007, a section of that tower, built on a steep slope just outside the palace, began to give way, indicating it was on the verge of collapse. What started as a simple task of repairing a collapsing tower turned into a six-week dig—and included a fascinating new discovery.

1. Why was Nehemiah distressed? Nehemiah 2:1-3. In the fifth century b.c., Judah had been taken into captivity and Jerusalem lay in ruins.

2. Who built a wall around Jerusalem? Verse 17. In Nehemiah 3, you can read a detailed account of the wall’s reconstruction. Nehemiah refers to 10 gates in the chapter. In verse 1, he mentions the northern entrance to the city—the sheep gate, where animals were brought into the temple for sacrifices. After that, Nehemiah describes the rest of the gates on the wall in order, moving around the western side of the city in a counter-clockwise direction and then up the eastern side back to the north end of the city.

3. How does Nehemiah describe the fountain gate? Nehemiah 3:15. “But the gate of the fountain repaired Shallun … and the wall of the pool of Siloah by the king’s garden, and unto the stairs that go down from the city of David.” The fountain gate, referred to as the spring gate today, was located somewhere near the Gihon Spring, which is a short walk south from where Dr. Mazar’s palace excavations were located.

4. What important discovery will be made near the fountain gate? Verse 16. Here, Nehemiah mentions the tombs of the kings of Judah, which have not yet been discovered. But putting Nehemiah’s description together with what Dr. Mazar keeps finding in the City of David, they must be close by.

5. How long did it take to complete the wall? Nehemiah 6:15-16. Nehemiah and the Jews were so driven that they completed the wall in 52 days.

6. How did Nehemiah withstand the attacks that came while he built the wall? Nehemiah 4:17-18. While Nehemiah and the people were working, numerous critics were determined to slow down their progress. Yet they kept right on building, working with a hammer in one hand and a weapon in the other.

This is just a small sampling of Dr. Mazar’s archaeological finds that prove the biblical record. “So Much Archaeological Proof!” shows many significant finds from other archaeologists that confirm the same reality: that what God says is true. As archaeological excavations continue, follow Dr. Mazar’s advice: “Let the stones speak for themselves.” They will prove the Bible true every time.