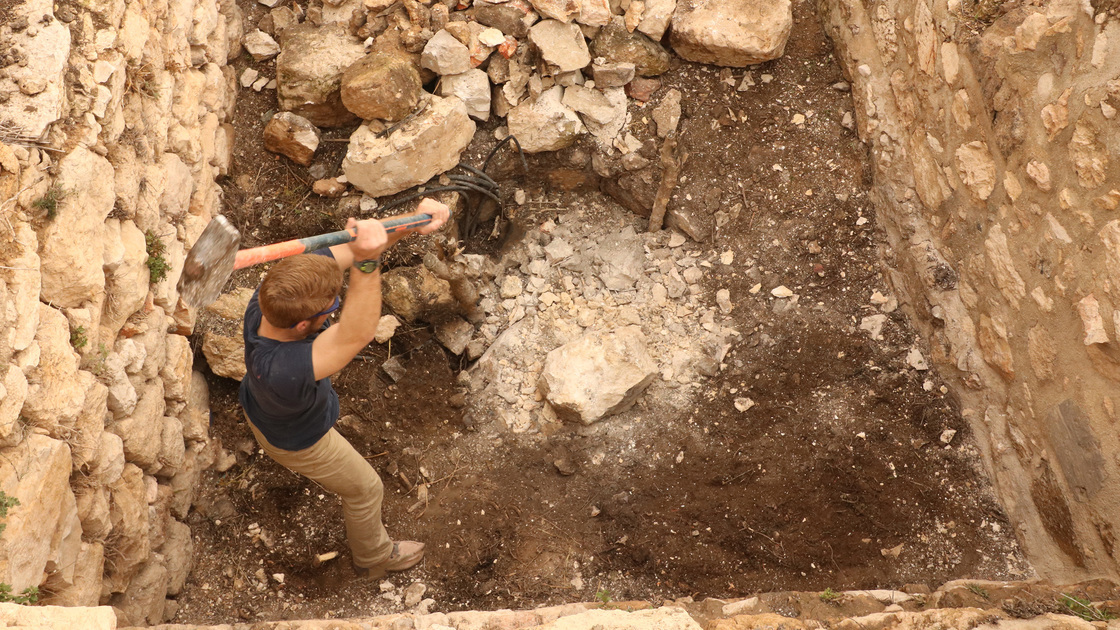 Excavating is an involved process. It isn’t just a matter of grabbing a shovel and digging holes. As we learned on the 2018 Ophel excavation, it was important for us to track the layers and distinguish them from one another so the finds from those layers could be dated properly. And along the way, we had to remove floating rocks, or rocks that sat within a layer of dirt and were not a part of an ancient structure. The process of removing these rocks taught me several unique lessons about overcoming sin.

The first lesson was that there were plenty of rocks to hinder the excavation process. We had a job to do, but the rocks frequently got in the way. It would make the digging process a lot easier and faster if there were no rocks to uncover and remove, but in every area of digging, there were always a range of rocks—from tiny pebbles to huge boulders.

Every morning, my area supervisor would tell me where to work for the day. I would eagerly grab my tools and buckets and begin excavating. As I filled bucket after bucket with dirt, it wouldn’t be long before I ran into a rock. Of course, there were some areas where the rocks were visible—sitting on the surface of the dirt. But most of the time, I had to dig for quite a while before a rock began to surface.

Our lives are similar. We have a job to do, but sin frequently gets in the way and holds us back. Sometimes, those sins are clearly visible, but often, they are hidden. We have to dig for them. And chances are, if we do, we will keep running into more and more of them.

Once I discovered a rock, I had to do something about it. There would be no point in fully exposing it and then leaving it in the ground. It would get in the way. And just like I had to remove the rocks from my area, God wants us to remove sin from our lives.

The second lesson I learned from the rock-removal process was that it took a lot of digging in order to properly remove a rock. It was extremely difficult—and many times impossible—to remove a rock from the ground without digging it up first. Discovering the top of the rock was helpful because then I knew it existed, but in order to get my hands or tools under it to pry it out, I had to expose much more than just the top of it. I needed to know how deeply set into the ground the rock was in order to excavate it properly.

Likewise, we cannot remove sin from our lives if we have a shallow understanding of it. We must completely uncover our sin, seeing how deeply it impacts our lives. Once we expose the sin and find out how rooted in it is, we can attack it and pry it out with all of our might.

The third lesson I learned was that not all rocks were equal. Rocks are rocks, but some rocks were easier to pick up and remove than others. Some rocks only required a small scoop to shovel them into a bucket, while others needed to be lifted and carried to the rock pile. Then, there were some stones that were so large that they wouldn’t even budge when I tried to lift them.

In the same way, we know that “whosoever shall keep the whole law, and yet offend in one point, he is guilty of all” (James 2:10). All sin is sin, and all sin is evil and breaks God’s law—but some sins are easier to pick up and remove than others. Rooting out a certain sin may only take stopping a bad habit. Rooting out another sin might take changing our entire routine. All sin requires work in order to remove it—just like all the rocks required work in order for me to remove them, no matter what size they were.

Depending on the size of those rocks, I had to treat each one differently. Not only did their size and weight vary, but the material that they were made of also varied. Some rocks were crumbly and weak, making them easy to remove. Others were dense, strong and multi-faceted, making them harder to handle and remove.

This leads to the fourth lesson I learned: Use the armor of God. If I could carry the rock to the rock pile, I would, but if it was too large to pick up, I would have to break it into smaller, more manageable chunks.

Breaking rocks required the right tools and the right armor. I would use a sledge hammer, and I would have to wear safety glasses and gloves. Without these tools, the rocks would remain whole and unmovable, and if any of the armor was missing, the job became dangerous. Often, as I hit the rock over and over, shards would fly up and hit my face and hands. Without the glasses and the gloves, I easily could have been injured.

We need the right tools and the right armor when we fight in our spiritual war as well. God provides us with this armor and the tools we need to stand against the devil and sin—they are listed in Ephesians 6:11-18.

Even when I had the right tools and armor, breaking rocks required effort. I hit the rocks again and again—sweat dripping off my face—until they were destroyed. It rarely took one hit to break a rock, and some large stones took hours. After dozens of attempts to break a particularly large rock, the temptation to just leave it intensified. I kept working at it, however, and the rush of joy I felt when it finally split apart was glorious.

When we are fighting to overcome a particularly difficult sin—something we’ve struggled with for a long time—it might be tempting to give up. It is imperative that we don’t, however. 2 Timothy 2:3 says, “Thou therefore endure hardness, as a good soldier of Jesus Christ.” Smashing sin is a hard process, but the reward at the end of it is well worth that process (Revelation 3:21).

Sometimes, the rock’s position would need to be adjusted in order to maximize the hammer’s impact. If there was a corner of the rock that jutted out, for example, that corner would be more likely to break if I could position the rock in a way where I could hit that precise spot. If I could hit the right spot, the hammer would break the rock into pieces.

In the same way, one of the tools God gives us in Ephesians 6 is the “sword of the Spirit, which is the word of God” (verse 17). God’s Word is a sword, and it is also a hammer: “Is not my word like as a fire? saith the Lord; and like a hammer that breaketh the rock in pieces?” (Jeremiah 23:29). God’s Word must make an impact on our lives because we can’t destroy our sins on our own. The Bible is the perfect tool to help us destroy sin. After all, “All scripture is given by inspiration of God, and is profitable for doctrine, for reproof, for correction, for instruction in righteousness” (2 Timothy 3:16).

The fifth lesson I learned was that moving rocks from one place to another was not the same as destroying them. Oftentimes, the areas we were excavating in required our full attention, so when we found a rock, dug it out, and removed it, we ended up placing it in a nearby pile we started at the beginning of the dig. This was fantastic because it allowed us to go back to work faster than if we had to carry the rock all the way to the bags they were supposed to be thrown into, but it was also bad because the rocks would have to be moved again later on in the dig.

In the meantime, that rock pile only got larger and larger. It did not get in the way of our excavation, but it still had to be dealt with. We eventually had to get the rocks down to the dumping bags so that the crane could come and carry the bags away. It took several hours over the course of several days to move all of these rocks again—after we had already dealt with them once.

Likewise, we cannot just move the sin in one area of our lives to another area. It must be completely destroyed. If it’s not, it will come back to haunt us later. The job will never be done until those sins are gone completely.

Removing sin completely is something God does, and He promises to remove our sins “as far as east is from the west,” if we truly repent (Psalm 103:12). The bags filled with our rocks were taken far away from the site. That was the goal of the rock-removal process: to get the rocks off the dig site completely. This required an outside force—a crane—just as removing sins completely from our lives requires an outside force—God.

Removing rocks was one of the hardest parts of working on the Ophel. The rocks were heavy, and some were sharp and awkward to carry. Breaking the ones that were too heavy to carry took a great deal of energy. But we had to “lay aside” those heavy rocks that crowded our excavation area, just as Paul admonishes us to “lay aside every weight, and the sin which doth so easily beset us …” (Hebrews 12:1). When the rocks were finally removed, the excavation could continue much faster and more efficiently. Although it takes immense effort and the right tools, it is beyond worth it to smash the stones and see them carried away, leaving behind a beautiful, clean excavation area.