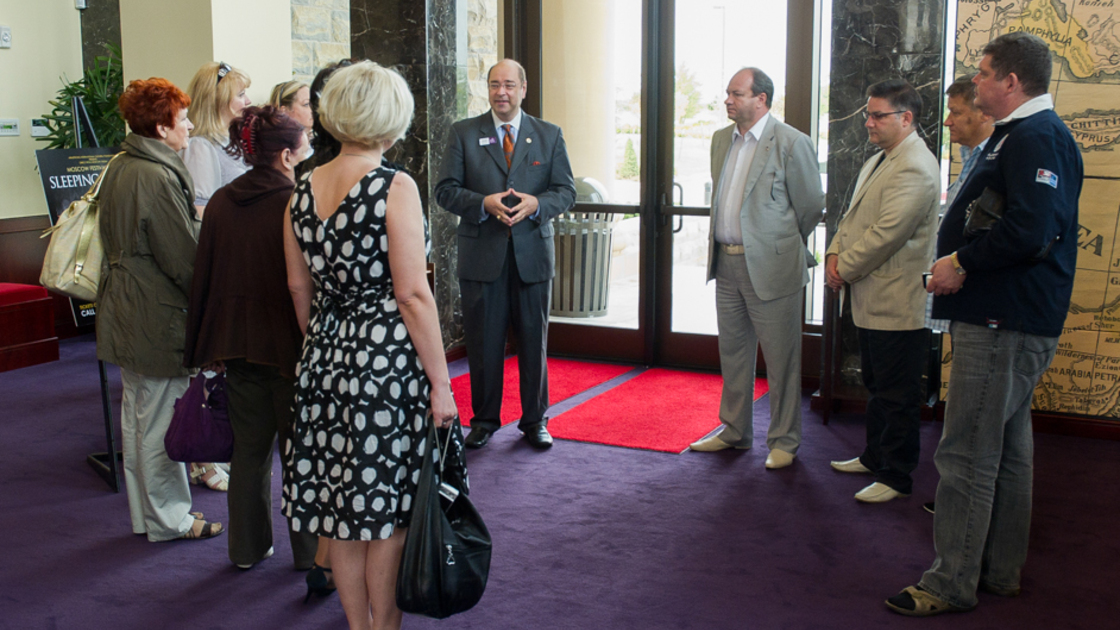 EDMOND—Armstrong Auditorium’s archaeological exhibit welcomed its 4,000th visitor in March. Since it opened on Jan. 15, 2012, the Seals of Jeremiah’s Captors Discovered exhibit has welcomed thousands of tourists from 22 American states, Canada, Costa Rica, Germany, Israel, Italy, New Zealand, Ukraine and Switzerland. The tally excludes thousands of additional visitors who are Philadelphia Church of God members or who visit the exhibit before and after concerts during the auditorium’s performing arts series.

The Seals of Jeremiah’s Captors Discovered features two tiny bullae (clay seals) that bear the names of Jehucal, son of Shelemiah, and Gedaliah, son of Pashur. The two were Judean princes who persecuted the Prophet Jeremiah, and are recorded together in the same verse: Jeremiah 38:1. Archaeologist Eilat Mazar discovered the seals during excavations in the northern section of the City of David in 2005 and in 2008, on behalf of the Hebrew University of Jerusalem.

The exhibit also includes dozens of artifacts from the first temple period. These include figurines, royal seal impressions, and one of the largest ancient vessels ever unearthed in the Holy City.

Seals of Jeremiah’s Captors Discovered portrays the history of ancient Israel from approximately 1200 to 500 b.c., specifically its rise under King Solomon, its split into two kingdoms, and the collapse of each kingdom. The exhibit focuses on the life of the Prophet Jeremiah, who warned Judah’s king to surrender Jerusalem to Babylon. When the warning went unheeded and the city was destroyed in 585 b.c., Jeremiah left the Holy Land with one of the king’s daughters and transferred Judah’s kingly line to Ireland.

“My wife and I have been studying the Bible for two years and have been to the Holy Land,” one gentleman said, “but this is better.”

“This exhibit is exactly what the doubters of the Bible need,” a patron said after taking a tour. “It is visual proof that the Bible is truth.”

The exhibit, located in the auditorium’s lobby, also exposes visitors to the building itself and its onyx, marble and cherry wood finishes. Hundreds of visitors have remarked on the lobby’s crystal chandeliers and on the two crystal candelabra originally commissioned by the shah of Iran in 1971 to celebrate the 2,500th anniversary of the Persian Empire.

“This must be Oklahoma’s best-kept secret!” one satisfied visitor said about Armstrong Auditorium.

“This place is a gem, and we need places like this,” another visitor remarked.

The Church has promoted the exhibit through advertisements in newspapers, local and national magazines, flyers, postcards, road signs, pcg-produced magazines and television, Armstrong International Cultural Foundation concerts and online. Hundreds of visitors mentioned that they heard about the exhibit from friends, co-workers and news coverage. Others simply decided to stop in after spotting the auditorium near the corner of Bryant Road and Waterloo Road in north Edmond.

Attendance in 2012 reached 1,873 and by 2014 had tapered to 765. Armstrong International Cultural Foundation marketing director Shane Granger is aiming to boost this year’s figure with more promotion, including a direct mail campaign and full-page ads in the May-June, July-August, and September-October issues of Biblical Archaeology Review. The magazine reaches 130,000 individual and newsstand subscribers and is the world’s largest circulation biblical archaeology magazine.

The Israel Antiquities Authority has approved for the artifacts in the Seals of Jeremiah’s Captors Discovered exhibit to remain at Armstrong Auditorium through October. They will then return to the Holy Land, where curators plan to display the bullae at the Israel Museum, Jerusalem.

‘I’ll Be Your Tour Guide Today’

The Seals of Jeremiah’s Captors Discovered exhibit at Armstrong Auditorium has provided guided tours to more than 4,000 visitors over the past three and a half years. Those tour guides have been a group of students and graduates from Herbert W. Armstrong College.

aicf marketing director Shane Granger and Trebels trained the tour guides. Trebels said he spent at least 90 minutes with each member of the crew. Before the trainees ever give a 45-minute tour of the exhibit, they must attend one first. Then, Trebels observes their first tour and gives a 20-minute evaluation, grading them on depth of thought, understanding of history, delivery, courtesy, friendliness, etiquette, and ability to adapt to different visitors.

“I realize that puts a relative amount of pressure on them, but they’ve always handled it well,” Trebels said.

“Working on the exhibit is a quick way to learn how to teach,” Armstrong senior Reese Zoellner said. “It’s imperative that you are able to read each person to see how much they already know and how you can help them deepen their understanding. Some need just the outline. Some know a lot already and are looking for new details. It’s been a great challenge to learn how to help everyone learn more.”

Not all visitors are so easy to please. Some arrive with a more skeptical viewpoint and more difficult questions.

“When we have welcomed skeptical people in, the package of the exhibit and the grand lobby creates a turning in their minds in most cases,” Trebels said. “It’s the skeptical people who ask the most questions and tell us they would like to come back with others.”

As for those who won’t be swayed, Trebels requested that pcg members pray for the tour guides’ ability to tactfully answer criticism and continue to uphold a high standard of conduct. On top of that, he said members should pray for the crew’s maturity, knowledge, understanding, wisdom, avoidance of mistakes by being completely truthful and redirecting patrons with spiritual questions to the proper authorities, and protection, especially since the exhibit supports the polarizing nation of Israel.