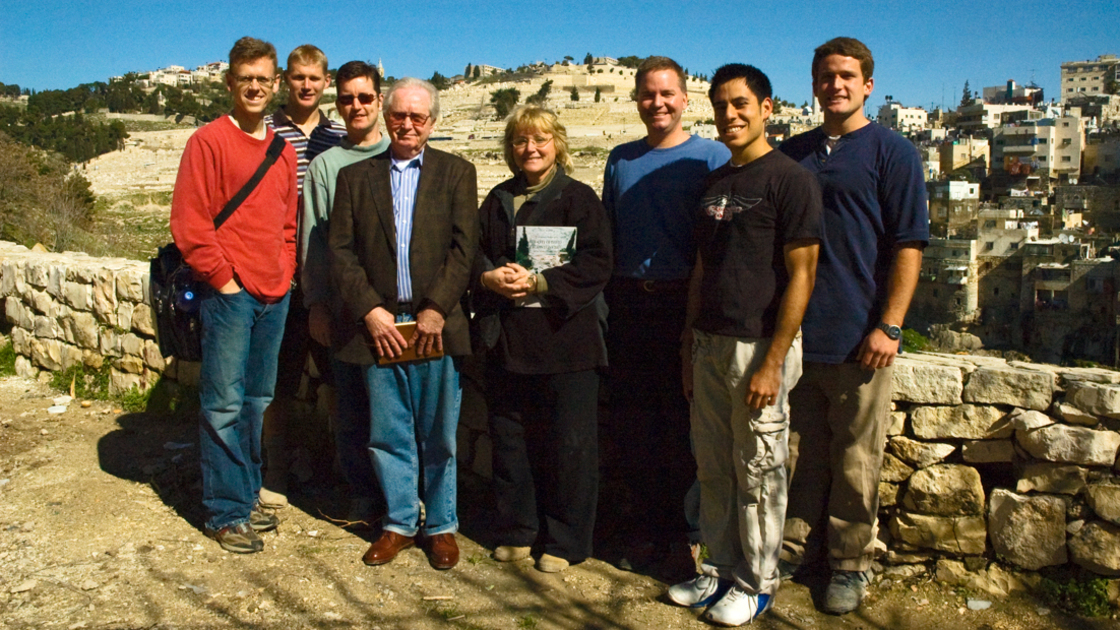 Nine days in Jerusalem held a busy itinerary for Pastor General Gerald Flurry, including listening to about 60 speakers at a two-day conference, taping television programs and holding several meetings regarding the City of David archaeological dig.

The trip went from February 14 to 23 and included a full day of travel on either side. Two Sabbaths provided Mr. Flurry the opportunity to spend time with the Jerusalem congregation, which at present consists of three Herbert W. Armstrong College students and two graduates, all of whom participate in the dig under Israeli archaeologist Eilat Mazar.

Accompanying the pastor general were his son, Evangelist Stephen Flurry, television department head Andrew Locher, and Trumpet managing editor Joel Hilliker. The trip was Stephen Flurry’s sixth in the year and a half that Herbert W. Armstrong College has been assisting with the archaeological project.

Dr. Mazar, one of the invited speakers, gave a short presentation about some of the latest archaeological findings in the City of David that represent the Jews’ ancient history in the area—and that, in many minds, strengthens their present claim to the land.

On the whole, the speakers represented a conservative political perspective. The most notable exception was Foreign Minister Tzipi Livni. In her address on the morning of the first day of the conference, Livni defended the Israeli government’s policy of negotiating with the Arabs even though it knows the Palestinians cannot meet their commitments, and even while suffering under their terrorist attacks. “Stopping the negotiations won’t stop the terror attacks,” she said in Hebrew (English translation was available via headsets). After Livni left, many of the speakers in the session that immediately followed openly criticized her remarks.

Emotion in several of the sessions was high, as the speakers described their commitment to preserving complete Jewish control over the Holy City—one of the main themes of the conference. Individual lectures addressed were, among many other topics, confronting radical Islam; defending against missile attacks; defining Israeli military doctrine and goals; combating anti-Semitism, especially within international governing bodies; and managing Israel’s image in the global media. Lectures exposed the severity of the threat to Israel posed by Iran and other regional enemies; the funding of terrorism; and the hatred and lies promulgated in Arab media and public education.

Mr. Flurry said it was the most valuable such conference he had ever attended. “If the speakers had known Bible prophecy,” he said, “I’m sure they would have been amazed about how their subjects were prophesied in the Bible.”

The lectures inspired the pens of the Trumpet writers in attendance. Within two weeks of the conference, material collected there had already featured heavily in seven articles on theTrumpet.com and two articles in the April issue of the Philadelphia Trumpet, which was produced immediately after the staff returned to Edmond.

Mr. Locher videotaped most of the conference, though at times it broke out into two simultaneous sessions. Even then, because all four visitors from headquarters attended, as well as Jerusalem dig participant Victor Vejil, at least two pcg representatives were able to listen and take notes on each session.

The pastor general also had the opportunity to meet a number of the conference speakers, including Melanie Phillips and former Israeli Ambassador Dore Gold.

While Mr. Flurry was in Jerusalem, the archaeological project, in which Dr. Mazar is excavating the palace of David, also received his focused attention, as well as that of Stephen Flurry, who oversees the Jerusalem volunteers.

Besides giving two college lectures from the volunteers’ apartment, which were taped and sent to headquarters, Stephen Flurry also provided individual instruction and guidance to the volunteers. “As important as this project is,” he said, “I try to make the most of every opportunity I have to remind the volunteers why God has assigned them to the dig.”

One afternoon, Dr. Mazar gave the pcg representatives a tour of the dig site. She pointed out the latest discoveries, the most fascinating of which still require time in the lab to fully decipher. In fact, Dr. Mazar expressed her eagerness to bring the current phase of the excavation to an end in order to spend time thoroughly processing the abundance of material it has uncovered.

The timing of the end of the present phase of the dig and the beginning of the next phase remain somewhat uncertain. The presence of the pcg volunteers—how many and for how long—was the topic of several discussions with Dr. Mazar during the trip.

At present, it appears a few of the volunteers will remain on the project even between excavation phases, which means they will help with the office and lab work. The beginning of the next phase of excavation would raise the prospect of once again increasing the number of volunteers.

Dr. Mazar repeatedly spoke of how valuable the pcg volunteers’ presence was to the success of the excavation. She has promoted them to supervisory and advisory positions that would generally be filled only by trained archaeologists.

On the Sunday afternoon during his trip, Mr. Flurry taped two Key of David episodes from a hilltop overlooking the City of David and the Temple Mount. The first was about a “mysterious message” in the book of Daniel that revolves around the king of the south and must be delivered in the end time. The second focused on the statement in Zechariah 3:2 that God “hath chosen Jerusalem.” In it, Mr. Flurry described the illustrious future of that city prophesied in the Bible, and what a contrast that future is to the problems besieging it today. Both programs aired in March.

Mr. Flurry also took an afternoon during his trip to visit Yad Vashem, the Holocaust museum in Jerusalem. He said he was very moved by the experience, particularly knowing that frightening history will repeat itself. “You feel you have to sit down now and then,” he said of the museum’s effect on him. “You could just about hear the blood crying out from those victims as a warning to Israel today.”